Breaking Point: A Novel of the Battle of Britain

It is August, 1940. Hitler’s triumphant Third Reich has crushed all Europe—except Britain. As Hitler launches a massive aerial assault, only the heavily outnumbered British RAF and the iron will of Winston Churchill can stop him. The fate of Western civilization teeters in the balance.

Johnnie Shaux, a Spitfire fighter pilot, knows that the average life expectancy of a pilot is a mere five hours of operational flying time. Sooner or later his luck will run out. Yet he must constantly summon up the fortitude to fly into conditions in which death is all but inevitable and continue to do so until the inevitable occurs…

Meanwhile, Eleanor Rand, a WAAF staff officer in RAF headquarters, is struggling to find her role in a man’s world and to make a contribution to the battle. She studies the control room maps that track the ebb and flow of conflict, the aerial thrust and parry, and begins to see the glimmerings of a radical strategic breakthrough…

Breaking Point is based on the actual events of six days in the historic Battle of Britain. The story alternates between Johnnie, face to face with the implacable enemy; and Eleanor, in 11 Group headquarters, using ‘zero-sum’ game theory to evolve a strategic model of the battle.

I’ve been trying to find books about World War II with some degree of romance in them and thus when I saw the blurb for “Breaking Point” I thought, here we go, this sounds interesting. I had no idea what a treat I was going to get with it. Yes, there are grim moments – it is the Battle of Britain after all and filled with young and inexperienced pilots, many of whom never had a chance due to the hurry with which the RAF hurled them into planes and into the air against the overwhelming air superiority of the Lufwaffe. But there is also a a fair degree of subtle British humor, an intelligent woman who is allowed to shine, a stoic embodiment of Yeats’ poem about a dying airman, and an understated romance that curled my toes.

Johnnie Shaux (pronounced Shaw) is an RAF pilot who has long outlasted the average survival time of most of his fellow pilots. As such he fully expects that his luck is running out and that sooner rather than later he will die in the skies over England. Yet he’s not upset about that. He’s always had nothing and expected nothing and when he dies, few will mourn him, an orphan. At Oxford, he was slightly denigrated by one with more social standing as the “stolid stoic” and Johnnie feels this is actually a fair description. Until his luck runs out, he’ll continue to go up, day after day, often multiple times a day, and fight against the German pilots he doesn’t know and doesn’t personally hate. It’s his job and he will do it.

He does get annoyed when his base is bombed and a total prat is promoted to head the squadron but with a sigh, he’ll move to the rattletrap emergency base and continue on. He’ll also do his best to train as many of these new pilots as he can in order to give them better odds of surviving more than five hours of flight time. 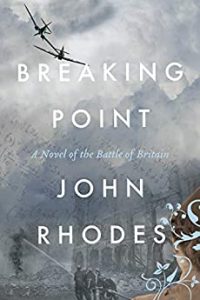 Eleanor Rand volunteered for the WAAF in order to do her part but feels wasted as she merely gathers daily statistics for the Air Minister. Overheard by Air Vice Marshall Rodney Park in the Group Operations Room as she’s stating how many planes and pilots there are to work with in terms of mathematics, she finds herself promoted to his staff and then given free rein to visit RAF bases and apply her mathematical mind to Fighter Command. As she toys with an idea, Eleanor finally gets a chance to use her strengths for strategies – not of how to win the battle but in how to not lose. And for how long the RAF must hold on in order to deny the Luftwaffe the win Hitler needs before Britain could be invaded.

As Eleanor visits various bases, she finally meets Johnnie again. They had been friends at Oxford – fellow maths geeks who delight in the precision and beauty of mathematics. But will Johnnie survive long enough to study Eleanor’s break through theory of zero-sum, asymmetrical maths and its application to the battle against the Luftwaffe? And will the two of them ever be on the same page as far as a future together?

From the moment he’s introduced, I like Johnnie. He’s kind, considerate, knows how to interact with people – unlike some of the upper class prats in his life – and can easily apply maths to every aspect of flying including how much actual time he has to shoot at German planes and how long it will take to line up to do it again. He cares – though he’d probably try to deny it – that the newbie pilots have as much chance of surviving as they can get and finds himself bonding with the new Wing Commander who is an absolute gem of a character. Seriously Pound is a delight every time he appears on the page and I could see the twinkle in his eye. Johnnie also cares for Eleanor and knows that when she’s thinking hard, she bites her lip – but only on the right side.

Eleanor Rand is fabulous and if this book is ever turned into a movie, British actresses would battle to play her. Unlike books in which a heroine is described physically down to her knickers, we learn little about what Eleanor looks like but an immense amount about how smart she is and – glory be – she’s allowed to be intelligent. Still better Eleanor has layers and depths. She does make some personal mistakes and it takes her a long time to finally admit what she feels for Johnnie (even though she knows that when he stares up at the ceiling, he’s concentrating) but darn it I loved seeing her unfold as a character and how she loves to lose herself in maths theories.

The Battle of Britain comes alive and I found myself riveted to the air battles 339 Squadron engages in. The descriptions of the various planes, the way they flew, and the tactics each side used were perfectly clear. As Eleanor was telling another character why Hitler needed Kesselring to destroy the RAF before an invasion could begin, then later explained why the RAF only needed to not lose the battle in order to defeat the Luftwaffe, it all made sense. I also appreciated that the RAF pilots were allowed to feel responsibility for the death of their German opponents personally and that Shaux was there to help one newbie with the impact of his actions.

A few things kept this from being an A read for me. Firstly I hated seeing Eleanor taken in by one particular upperclass rotter. Secondly, it’s about war and in war people die and I hated to lose a few of the characters that we did. Plus the scene in the Defiant at the end did strain my credulity just a bit. But what I do like more than makes up for these little niggles. I had a great time reading “Breaking Point” and look forward to the sequel. B+