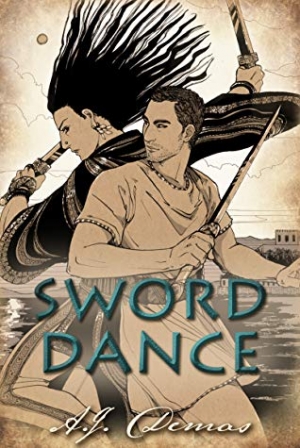 Five years ago, Damiskos’s brilliant military career was cut short, leaving him with a permanent disability and scars that are not all physical. Adrift and still grieving, he tries to find meaning in an unsatisfying job.

Work takes him to the remote seaside villa of an old friend, where, among an odd assortment of guests, he meets the eunuch sword-dancer Varazda. Enigmatic and beautiful but distinctly prickly, Varazda is the antithesis of the straightforward and serious Damiskos. Yet as they keep getting in each other’s way at the villa, their mutual dislike is complicated by a spark of undeniable attraction.

Then the villa’s guests begin to reveal their true characters and motives—no one here is what they seem—and Damiskos finds himself at the centre of a bizarre web of espionage, theft, and assassination. Varazda may need Damiskos’s help, but not as much as Damiskos, finally awakening to a new sense of life and purpose, needs Varazda.

Sword Dance is the first book in the Sword Dance trilogy, an m/m romance set in an imaginary ancient world, with murderous philosophy students, sex acts named after fruit, and love blossoming in the midst of mayhem.

I’ve not read your books before, even though my book buddies praised your work, but I decided to give this story a chance and overall, I’m really glad I did. However, I found the vehement dislike of philosophy and philosophy students the narrative was pushing on me quite strange. I am perfectly aware that the story is taking place in the imaginary ancient world so, in theory, I shouldn’t be judging it by real historical societies. But for this reader this book invoked such strong associations with Greek/Roman societies that the idea of not judging based on the real historical societies did not quite work for me.

All the philosophers in this book are either horrible people (blurb does talk about murderous philosophy students so I am not revealing any spoilers here), or incompetent cowards, or just incompetent. As I said, because philosophy and philosophers were such big important part of Greek Roman civilization (history I love), I was at best confused.

Have I mentioned philosophy students in this book sound like white nationalists and homophobes? Well, they did to me. Enough about this relatively minor issue – if readers of this book understand there is no connection or association with real history, they should be fine.

The story in this book is described quite well in the blurb. Damiscos arrives at the villa of an old friend, Niomi, to buy a fish sauce (don’t ask, this was part of his job description) and he finds out that his friend is currently entertaining several guests at her villa. Not all these guests are very pleasant (understatement of the century). They are philosophy students who are there mostly because their teacher has a familial connection with Niomi, she felt bad for him, and invited him into her home.

Damiscos also meets Varazda who is supposedly a slave of another guest, Arystoklus. Even though it is clear in the blurb that the philosophy students are up to no good, I can’t tell you anything about how the plot unfolds because the blurb is silent about it. Let’s just say that a romance unfolds amidst the murder mystery and the suspense/adventure… although mystery is revealed rather quickly. Read the adventure for yourself, let’s just talk about the romance.

I thought romance was *wonderful*. It may not have been very slow burn time wise, but the narrative unfolded really slowly to show both characters going from initial distrust to respect, to liking, and finally to love relatively slowly. More importantly I thought they both experienced some character growth and, since this is a first book of the trilogy, I am guessing that more character growth is to be expected.

The story does not have many sex scenes (since they just met and were often in danger); I appreciated that and I actually really liked what I did read. Damiscos always made sure to ask whether Varazda wanted to do something new, if he wanted to changed it up just a little bit, and there was teasing and even laughter. I think what I read in this book was not just sex, but intimacy and I liked that.

“He looked into Varazda’s face—what he could see of it from this angle—and loosened his grip. “Still a yes,” Varazda murmured. “Just a—a—yes, very much a yes.”

“Please.” He collapsed gracefully onto it, pulling the covers around himself, and pressed his face into the pillow, drawing a deep breath. “Mmmm. Smells like soldier.” “I’m sorry,” said Damiskos stiffly. One dark eye looked up at him from the pillow. “I don’t know if you’ve worked this out, First Spear,” came Varazda’s muffled voice, “but I fancy soldiers.”

“Damiskos looked into Varazda’s eyes, and the smile that momentarily lit Varazda’s face—soft, intimate, just a little wry—had nothing to do with sex. Except that it made Damiskos want him with the heat of a building on fire.”

Here is Varazda comforting Damiscos after he had a flashback to his war days. I cite this deliberately because the book mostly avoids standard hurt/comfort moments and this one was one of the very few. These men do lean on each other and support each other more and more as the story unfolds, but it was to my thinking *restrained*.

“Then he leaned forward, taking Damiskos’s face between his hands, and kissed him once, hard. Damiskos collapsed against him as if his bones had all suddenly dissolved. He realized distantly that he was crying—sobbing—in Varazda’s arms, and he couldn’t stop. The amazing thing was that Varazda didn’t seem embarrassed or even surprised. “You’re all right,” he kept saying calmly. “You’re all right. This isn’t then. This is different. I’m here.” Varazda somehow, miraculously, understood.”

The book does not end with them together but they are together mentally and planning to reunite soon. It is not a cliffhanger.