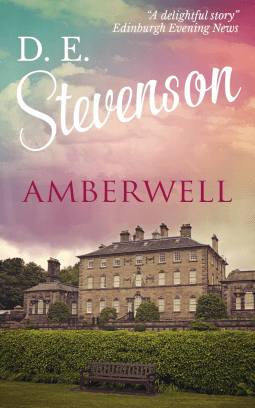 It was dark when Nell Ayrton got to Carlisle. There had been a raid in the Midlands and the station was blacked-out and in chaos. Nell ran wildly from one side of the enormous station to the other, despair clutching at her heart. How on earth was she to find an unknown woman in the milling crowds? And would she have Roger’s baby safely tucked away with her?

Nell is just one of the Aryton’s in trouble as the Second World War looms.
Amberwell, an estate on the west coast of Scotland, has been in the Ayrton family for several generations… descending from father to son in an unbroken line. By family tradition, each new owner was to add to the amenities of the place and in this way Amberwell grew larger and more beautiful as the years went by, endowed with gardens and terraces and orchards.

The five young Ayrtons who grew up at Amberwell have now ventured out into the world. They may have been brought up by cool, distant parents, but the bonds between these children are strong. Now they must fight to hold on to what they see dear as the threat of war emerges.

Will the war drastically alter their destinies? What will become of the Amberwell children, their complex relationships, and the place they call home …?

There is a new press rereleasing books by D.E. Stevenson and I’m delighted to see it. As soon as I started reading it, “Amberwell” immediately brought to mind the last Stevenson books I reviewed “Listening Valley” and “Celia’s House.” I guess when the title is that of a place, and specifically a house, it’s a fair bet that this is the type of book it will be. Taking place in Scotland, among a certain class of landed but not noble families, it begins with the history of this family estate which has passed down from father to son for over 150 years.

The current family has the usual large crop of children, two boys and three girls, who are benignly neglected by their parents except for those moments of sending the boys off to school and choosing their future careers for them. As for the girls, well the parents seem to assume that Nannie will see to them and Miss Clarke, brought in daily, will instruct them in what little she herself knows and beyond that, well girls just don’t need an education wasted on them. Or going to church or meeting many people.

Honestly, during the first half of the book, I wanted to shake the Ayrton parents. Repeatedly. As the eldest son Roger says, they never even tried to know their children and it was only when he saw his fellow officers reading long letters from and talking at length about their families that he realized what was missing in his life. I also sympathized with him in his frustration and anger when his parents seemed more worried about losing house staff than about the fact that their country was at war and he, being in the Army, might die.

It is delightful, if sad, to watch Nell blossom in the face of the needs of keeping Amberwell running. Her mother is certainly her useless self about it. Eldest brother Roger has his trauma to survive while younger brother Tom finally gets into the Navy despite his father. The prettiest sister Connie is the one who made, according to her parents, the “good marriage” yet seems to have turned out the worst. And why does Stevenson always make the pretty one have the empty, shallow life? Meanwhile the fate of the youngest sister Anne, the one who got cut off from the whole family for what she did, remains a mystery until the end.

To be completely honest, the book started somewhat slowly. The prewar years during which we see the damage being done to these poor children by their Edwardian parents is almost emotionally rending. It’s not until the siblings either leave the stifling atmosphere of their home or are called on to take over it and lead it through the war years that they finally gain their independence and freedom. And even then the damage done to them emotionally is still not healed by the end of the book. Yet, as the five children grow, I found myself riveted to the story and silently cheering their progress towards adulthood.

There are some threads unfinished and a few things mentioned in the story which aren’t completely explained. Tom tells Nell that if only their father had told him why father wanted Tom to be a doctor and not to join the Navy, it would have saved him years of misery and resentment. But then Tom never tells Nell – or us – what those reasons were. There is also an unfinished romance which now has me on pins and needles and I’m curious as to how an employment situation will work out. There is a follow up novel which I hope this press will release soon as I’m gasping to know what happens next about a lot of things.

I suspect that this novel is one that will appeal to people who like quiet, more women’s fiction sort of books or ones interested in between the war tales or how Scotland coped with World War II. In other words, if you’ve tried Stevenson and liked her, this will probably suit. B

→ Jayne
Previous article: Thursday News: SXSW, Microsoft, Disney, and the best meditation ever
Next Post: #TBT Giveaway for Rules for the Reckless