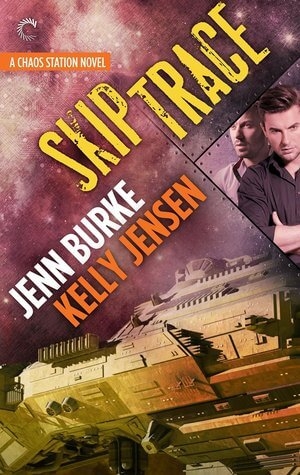 Zander Anatolius has been revived from the fatal effects of the super-soldier program, but now he has to face his estranged family and tell a story few would believe. With his lover and the crew of the Chaos at his side, Zander returns home to a media frenzy, threats from the military and pressure to join the family business.

Felix Ingesson still struggles with the horror of believing Zander dead. And no matter how strong their emotional connection is, Felix feels out of place in the glittery world of Zander’s rich family. His lover would be better off without a broken, low-class ship’s engineer holding him back.

When the crew receives word that another of Zander’s former teammates needs rescue, Felix travels with the Chaos…setting Zander free. But when Zander is arrested for treason, the men realize they need each other as much as ever—not only to survive, but to make their lives worth living.

Note: Spoiler Alert for earlier books in the series.

Kaetrin: At the end of Lonely Shore, (spoiler alert) Felix and Zed were happy together, Zed having chosen to return to the Chaos instead of remaining with the Guardians. They and the rest of the Chaos crew are headed toward Zed’s home where he will be reunited with his family. I said in our review of Lonely Shore that I was a bit worried about how the series was going to continue. I thought Felix and Zed’s romantic arc was done. I was willing to keep reading and be surprised (hoping to be surprised) but I hoped there wouldn’t be artificial conflicts between the pair. Unfortunately, in the first half of Skip Trace, that’s what I got. Felix has managed to convince himself that he’s not good enough for Zed and Zed will be better off staying with his family and leaving the Chaos. Where he got that from I don’t know because Zed never gave any indication that’s what he wanted. I mean, Zed chose Felix over the Guardians. If that’s not a statement, I don’t know what is.  It felt, to me, like a long-winded and very artificial way to get the characters separated so that the second half of the book could happen.

What did you think of the beginning Sirius?

Sirius: Yep, both of us were worried about whether Zed and Felix had any internal issues to resolve and not look like “the heroes of romance novels” (and I am not saying this as a compliment) and for both of us, unfortunately, it looks like some of our worries came true.

I tried to use the analytical part of my brain to come up with justifications for Felix, because of course the book wanted me to do that, and I came up with some excuses. He did not resolve his own issues, I think was the main one, so he was bound to act irrationally. Maybe, but in fiction I still need to see an explanation for the hero acting irrationally and Felix not resolving his own issues *just was not enough*. I thought he deserved a good smack or two or ten. Him whining about Zed decision to stay with his family and him not being good enough made me think, wait what? Didn’t you grow up with that family or at least near them? Surely you know what they think about you and consider you good enough. No? Never happened?

Kaetrin:  Yes! The way Felix felt about Zed’s family felt inconsistent with the earlier books and it bothered me. In Chaos Station, we were told that Felix was basically adopted by Zed’s family and I’m sure I read that they’d offered him a home after he was released from the Stin prison mine, so his belief he was unwelcome was a bridge too far for me.

Sirius: And as you said, Zed had already made a very loud statement in the last book. What was that? Something my imagination came up with? Lets just say I put this book down several times before I forced myself to get through the first half. Did it get better for you?

Kaetrin: Yes it did, fortunately. I, too, put the book down a couple of times at the beginning.  I don’t think this is a spoiler to say given the book description, but once Zed gets arrested, things started looking up. Not that I was excited by Zed getting arrested or anything of course! But, at that point, the characters started acting like I expected them to act and there was a lot more action and tension in the story. I just didn’t believe the beginning. It felt manufactured to me. But when Zed is arrested, Felix and the crew of the Chaos have to race to the rescue and I am, ever and always, a sucker for the rescue trope. (Trigger warning – there is some torture when Zed is being interrogated which, while not graphic, was still pretty awful.)  The stakes immediately got higher and that’s when I bought into the story. What about you?

Sirius: I certainly enjoyed the second half of the book much better – as you said, the characters started acting the way one expects them to act (based on the previous books), we see nonstop action, camaraderie, and Zed and Felix trying to learn something from the events of the book and grow as characters. But now I don’t have any confidence that Felix will remember what he learned in the next book. I fully expect him to forget about it by the time the next book comes along. Actually, take a look at the blurb of the next book. I would like to place a bet that Zed will forget how much Felix loves him and act all jealous. I really, really want to be proven wrong, because the space opera part of this story was really enjoyable and the chemistry between the guys was still of the charts for me, but Felix acting stupid was really boring and manufactured .

Kaetrin: It looks like the next book will delve more into Felix’s time as a prisoner of the Stin. I’m hoping that the characters don’t regress but actually tackle any issues together.  I like reading about existing couple doing things; fighting crime, having adventures, etc, (I’m a fan of the In Death series after all) but I don’t like manufactured internal conflicts. Frankly, there seems to be enough external conflict in their environment as it is, and it’s much more believable.

Sirius: And let us talk about the Guardians – obviously they and Zed are connected for some mysterious big payoff at the end, right? It is not so that at the end of every book they would act as a saving device doing something nobody else can do, right? Right?

Kaetrin: I think (I hope!) there is a plan for the Guardians, or, at least, regarding what Zed is to do for them but yes, I agree. No more deus ex machina please.

The end of the story brought a very interesting development to the world of the series and that is intriguing and I like the idea of the Chaos having a base of operations. I liked how the cast expanded in this book. I’m happy to read about the adventures of the Chaos crew, with Felix’s and Zed’s romance for some spice but I don’t want them to be continually breaking up and getting back together. That ruins the romance before for me because I think I can’t believe in their HEA. I want to see the characters grow and work together rather than separating at the first sign of trouble.

I thought the back half of Skip Trace was much stronger than the front but I’d still say Lonely Shore was my favourite of the three books so far.  Was there anything else that particularly struck you about the story?

Sirius: I think this is the time for me to wrap up my part because all I can do right now is keep nodding my head in agreement with what you wrote. What else did I like? I liked Marney; she was a badass in the best sense of the word for me. What is your grade? I did not like first half and enjoyed the second one so I guess C sounds like a nice compromise.

Kaetrin: I really enjoyed the back half so I’m going with a C+.