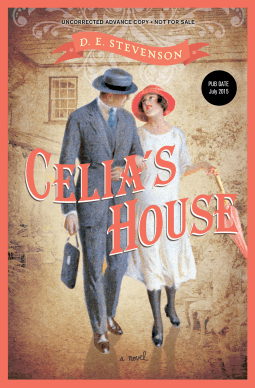 Celia Dunne may be an old spinster, but she’s no fool. She knows that changing her will to leave the grand family estate, Dunnian, to her grand-nephew will ruffle feathers within the family. But Celia also knows that Dunnian has stood solemn and empty for far too long, and she intends for that to change after she’s gone. Humphrey’s children will turn the creaky old house back into a family home-just the way it was meant to be.

As Humphrey’s young family grows and expands within the walls of Dunnian, the house seems to welcome them with warmth and a wonderful feeling of belonging. Following the Dunnes through youthful antics, merry parties, heartbreaks, love, and marriages, Celia’s House is an enchanting family novel that begs to be read and savored over and over again.

Ever since I discovered D.E. Stevenson via these reissues from Sourcebooks, I’ve been eagerly waiting for the next one at six month intervals. Honestly, they haven’t all clicked for me but when one does, it’s a delight. “Celia’s House” is a book I think readers will either love or loathe. Maybe loathe is too strong a term but I’ll warn upfront that it’s not a true romance, though it has romantic threads running through it. Instead it’s a family novel but also a house novel in the literal sense. It’s as much about Dunnian as the Dunnes.

One note: There are some slight errors in the text due to scanning or proofing errors. Nothing egregious but every now and then something jars just slightly.

The book is divided into five sections that span from 1906 to 1942. I was enchanted by the detailed, loving description of Dunnian and how important it is and has been to generations – including the gardener. Reading about the quiet, drifting conversation between the older great-aunt Celia and her great-nephew Humphrey – all Dunnian men have been named Humphrey, Henry or William – brought back my own childhood listening to aunts, great-aunts and my grandmother discuss the people and small town where my mother grew up. Some may find the slower pace boring but to me, it was restful.

After all, it’s called “Celia’s House” so of course there is a great deal of detail paid to the history of it, to family, to the decision of who Celia feels is suited for it and to get it. And it’s lovely who does. Humphrey and Alice truly are the “right sort” – ones who “feel” the house as opposed to those who see it as dumpy and old fashioned and who plan to overhaul it as soon as the last spade of dirt lands on aunt Celia’s grave.

The next part starts from the POV of young Master Mark – Humphrey’s son – as he explores and gets to know Dunnian and the people who call – and did call – it home. Wonderful Nannie is there to soothe and comfort while Miss Becky can tell stories about Dunnian and Dunne history. Thrilling tales of Border Reivers and battles fought against the English and of people who have lived on this land for centuries. Meanwhile his mother is guided by the local doyenne through her new duties as lady of the house. One must be firm with the housemaids and not let cook serve the cod without sauce.

In the third part, Humphrey and Alice’s children are now in their twenties and pairing off with some looking as if they’ll make disastrous choices. The language is all very “Bright Young Things” – “most awfully interesting,” and “tremendous fun” or “rather wonderful” unless one “blots his copybook.” Long evening walks are taken in tweeds with the dogs down by the river. Heartbreak arrives as one daughter makes a “good marriage” yet a bad decision and I held my breath as Mark barreled towards disaster.

I will admit that what comes next is my favorite. There is humor as grown Mark finds his way even if that shows him as a hopeless male trying to keep house. No dishes don’t wash themselves nor do groceries magically appear in the larder and one must insist that the housemaids wear clean aprons. But the best is the moment when all becomes right with the world. Truth and fair play prevail and a wrong is righted most decisively. Two lovely people finally find each other and one nasty one is sent packing.

The final war years bit is the shortest and deals with ration coupons, lack of servants in a house which is not labor saving and how young Celia has become adept at handling the boilers. Everyone is pitching in and making do. There’s thrilling news for Deb and Mark while Humphrey chafes at the fact he can’t do more for the war effort. Those wanting more can turn to “Listening Valley” to discover who is finally worthy of happy Celia.

All in all, it’s a wonderful story told with warmth and love about a house and the family who have lived there for generations. B

“It’s a lovely house,” Courtney said slowly. “There’s some-thing about it— I don’t quite know what it is— something very satisfying.”

“I know,” declared Courtney. “I’ve got it now. It’s a home, that’s what it is. That’s what’s so very special about it. Dunnian looks like a place for people to live in and be happy.”

Humphrey smiled— no praise could have pleased him better.

They were still standing there when Celia came out of the front door. She hesitated for a moment and then began to walk toward them down the drive. Celia was wearing a cherry-colored linen frock and her head was bare; she was carrying a basket on her arm.

And this, thought Courtney, as he went forward to meet his fate, this is one of the happy people who live at Dunnian House.

Suddenly the sun came out from behind the clouds and all the birds in the garden began to sing.