Lottie just knows that her boyfriend is going to propose during lunch at one of London’s fanciest restaurants. But when his big question involves a trip abroad, not a trip down the aisle, she’s completely crushed. So when Ben, an old flame, calls her out of the blue and reminds Lottie of their pact to get married if they were both still single at thirty, she jumps at the chance. No formal dates—just a quick march to the altar and a honeymoon on Ikonos, the sun-drenched Greek island where they first met years ago.

Their family and friends are horrified. Fliss, Lottie’s older sister, knows that Lottie can be impulsive—but surely this is her worst decision yet. And Ben’s colleague Lorcan fears that this hasty marriage will ruin his friend’s career. To keep Lottie and Ben from making a terrible mistake, Fliss concocts an elaborate scheme to sabotage their wedding night. As she and Lorcan jet off to Ikonos in pursuit, Lottie and Ben are in for a honeymoon to remember, for better . . . or worse.

This is only the second book of yours I’ve read but I’m seeing a pattern developing – namely plots that sound more than a little ridiculous but which have to be accepted in order to enjoy your particular brand of literary chaos. So far, I’ve had enough fun with the books that the outlandish things going on haven’t fazed me. But when it comes right down to it, the plot descriptions do make it sound as if your novels are peopled by complete fucking lunatics.

Lottie is a pulled together professional woman with a tendency to go whack-shit when love lets her down. She’s spent years remembering her gap year in a hazy, golden glow that she tries to wrap around herself after the disappointing turn of her relationship with Richard. This jump from the frying pan into the fire of her sudden marriage is the set up that must be bought – hook, line and sinker by the reader. And let’s face it, if this wasn’t a comedy and it hadn’t been written by you, I would have closed the book right then with the thought that Lottie was as crazy as a shit house rat. But, as told by Fliss, Lottie’s past actions and the fact that Lottie and Ben were sympatico at one time makes it easier to shake off the WTF aspect of the plot set up and get on with reading it. It takes the horrormoon with its final trip back to the scene of her memories to jolt it home to her – you really can’t go back.

I literally crowed with laughter – earning me strange looks from my kitties – at so many points — the condom landing in Lorcan’s G&T at the sidewalk bistro, Richard upending his “won’t fit in the overhead bin” suitcase and then, after pawing through it, standing in the Heathrow departing lounge holding his wadded up boxer shorts, Ben’s loud and persistant (despite another guest thinking him a perv) efforts on the beach to rent a hotel room from a fellow hotel couple for quick sex and then there’s the sheer, demonic brilliance of manager Nico & Co’s fiendishly clever “in flagrante delicto” inhibiting efforts at the resort. It’s a shivaree of epic, long distance proportions. 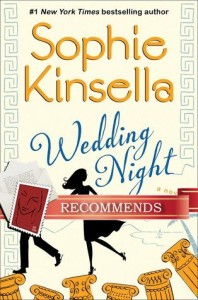 But, there’s something more going on here. The wedding night sabotage is funny but had the book been only that, it would have grown rom-com stale very soon. Lottie and Ben are slowly discovering that maybe you can’t just ignore 15 years of separate living and perhaps at 33 you really do need to know something more about your mate than what you knew as hormonal 18 year olds.

Meanwhile Fliss might come off as a nutcase for her choice to stick a spoke in Lottie’s wedding night wheels. Her defense makes more sense than might initally be believed given Lottie’s long history of kooky post-breakup actions and Unfortunate Choices – this being the worst of them. And then there’s Fliss’s own hellish divorce that drives her to try and avoid watching Lottie endure the same. As Lorcan tells Fliss, after blowing up at her for the epic interference in her sister’s life, in a fucked up way, Fliss is trying to do the right thing and help Lottie, but she can’t be Lottie’s keeper forever and Lottie deserves the chance to succeed or fail in her marriage choice

Then Lorcan shouldn’t be throwing stones in his glass house because he’s just as obsessed with continuing his efforts on behalf of Ben’s company. Fliss gets to raise her eyebrows at Lorcan trudging across half of Europe to browbeat Ben into making the best – in Lorcan’s POV – decision for the paper products company. Just as Fliss is almost blinded in her efforts to “save” Lottie from a mistake, Lorcan can be so singleminded that he can’t see the forest for the trees. This trip, the situation and his time with Fliss will be the things that beak the lock the job has on him and sets him free to get back on with his own life.

Fliss and Lorcan bring the book to some deeper moments as they trade divorce horror stories and find shoulders to cry on about it. Fliss, at least, has spent yonks complaining to anyone she can corner about her soon-to-be-ex husband’s shittiness but it doesn’t seem as if she’s taken the final step to emotionally let it all out and thus let it go until now. This is what finally brings Fliss closure and begins to heal her wounded spirit. It helps Lorcan too I think, as he sees how far Fliss and Richard will go for family and loved ones.

And Richard! Richard is aces in how he comes through romantically – flying around the world, being willing to discover the truth about something that means a great deal to Lottie and even the fact that he knows this means a great deal to her. Bless him that he’s even halfway to accepting the ring Lottie’s bought him.

The alternate first person takes a little getting used to but both women are astute observers and I felt I was getting the unvarnished reactions of the others in the story – mostly men now that I think of it. Both sisters find what they need – Lottie gets the man she really loved all along – and Fliss gets letting go, peace and a new start. I love the gift that Lorcan gets her which shows he remembers what she’s said.

This could have been little more than a light, frothy beach read but underneath the frivolity is some deep shit. My advice for readers is just to let yourself go and flume with it. B