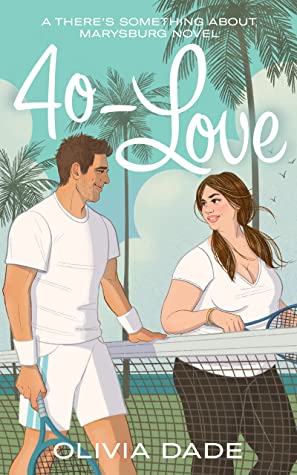 First off, what a gorgeous cover! It’s pretty, fun and flirty and represents the main characters very well.

Tess Dunn, who is about to turn 40, is the assistant principal at Marysburg High School and is on vacation with her BFF Belle, a fellow teacher (who now lives in Boston), for two weeks on a resort island not far from the Florida coast.

Tess is fat. Her fatness is front and centre in the book, from the cover to the meet cute and all the way through. Tess is taking an early-morning ocean swim and wearing a halter-top bikini in the ocean and adjusting it because it is so uncomfortable for her “ginormous boobs” when she is dunked by a rogue wave and ends up sans top. As a member of the teaching profession in the USA and one who keenly wants a promotion which looks to be shortly on offer, she cannot afford a hint of scandal and such a thing as a photograph on social media or a complaint by other guests could torpedo her career. It’s stupid but nonetheless true. There are some teen/pre-teen young people entering the water and Tess is desperate. She seeks aid from the only other adult nearby, who turns out to be Lucas Karlsson, the resident tennis instructor (although she doesn’t know it at the time).

I can’t say that Lucas initially made a good impression upon me. He more than made up for it for the rest of the book but that very first interaction came across to me as a little skeevy given that his first offer to shield her from onlookers is to use his hands rather than go and get her a towel.  The book tells me that Lucas is often propositioned by women and he thinks that is what Tess is doing. He’s a 26-year-old former tennis professional, fit and athletic, tall and gorgeous with, what I imagine to be a kind of young Roger Federer vibe going on. He doesn’t lack for sexual partners if he wants them. But still. I didn’t like his initial reaction to Tess in that respect. I did however like his other initial reaction; he thought her beautiful and never, not once, looked upon her as the butt of a joke.

Let’s face it, in much of mainstream media the fat woman losing her bikini top would be played for laughs (not funny but there you go) and the hot tennis pro chasing her would be a con man because the fat woman doesn’t get the guy. It’s beginning to be depicted differently (and better) in some movies these days but it would still be the more likely offering I believe. But that’s not the story you are telling, thank God. Here, Lucas is  (to add a cricket metaphor into a book which has a tennis-theme because why not?) bowled over by Tess. He finds her unbelievably sexy and beautiful. He is neither fazed or dismayed by their age difference; he finds her wickedly funny and smart and admires pretty much everything about her.

Tess is very comfortable in her body. She can get a bit touchy at times believing (based on past experience) that someone may leap to trying to police her diet or activity or leap to judgement about her state of health but as for herself, she’s comfortable in her body and likes it just fine the way it is. She is scarred by a prior relationship breakdown when her then-fiance cheated on her (with a young grad student – he was a professor) and accused her of being too much like his mother than a lover, of being cold and practical rather than warm and loving. He ex was a little older than she or around the same age and she could not keep hold of him. How could a relationship between her and Lucas, so much younger than she, possibly work? She doesn’t doubt his attraction to her for body reasons. She doubts his attraction to her for reasons quite aside from that.

Lucas hides behind a veneer of light flirtation and doesn’t let people get too close to him. After the ending of his career due to injury, he took the tennis instructor job and has coasted since then, still a bit lost about what his future might hold and lacking confidence in himself that he has anything useful or meaningful to offer now that he cannot perform at the highest level in his chosen sport. But when he meets Tess, he is challenged (by her, and quite directly too) to open up and let her see him. And, for her, he is willing to do so.

I wanted to say something else about the fat representation in the book. It’s not possible to pretend that Tess isn’t fat. The book is full of descriptions of her, from her own perspective and from Lucas’s. In Lucas’s POV we most often see those descriptors used with compliments and other markers of his attraction; “dimpled adorable thighs”, “generous, plush and more beautiful” breasts,

And he wasn’t talking about her awe-inspiring breasts or her generous ass or her soft belly, although those were draws in their own right.

A reader cannot see Tess other than the size she is. She is also shown, at various times red-faced and sweaty, dealing with back pain from having large breasts, knee pain, likely contributed to by her weight (per Tess) and other less than flattering things but it’s all okay. Lucas loves her just the way she is. There is something so powerful in that representation. It is not a fantasy but much more real than that. There were times I found it somewhat confronting but after asking myself why that was, I realised it was more about my own body issues than anything else. My husband is a silver fox but he’s not 26 and athletic and fit with washboard abs. I struggle to see myself with someone like Lucas unless I see myself as far more attractive than I actually am. I put myself in Tess’s place and thought of all the ways I’d want to hide any perceived imperfection (and I perceive many) from someone like Lucas and how I would struggle to be myself with him and could only admire Tess. For all of her self-esteem issues brought on her her jerkface ex, she was very emotionally brave. Far more so than I.

40-Love explicitly tells a story of a realistically drawn older fat woman getting the hot young guy and it does not apologise for it. It does not try and hide Tess’s fatness or dress it up or romanticise it. Tess is worthy just the way she is. Period.

Perhaps, in hindsight, it was not a bad thing that I initially thought Lucas was less than perfect. For the rest of the book he was basically entirely perfect. Sometimes, a little too perfect. Tess was worried she would end up being a kind of maternal figure to him (based on things her ex said to her) but there were hints of the reverse being the case here and there; where I thought Lucas edged too much toward caregiver than lover.

Most of the book takes place in the two weeks of Tess and Belle’s vacation. For reasons which turn out to be a little thin, Tess is spending quite a bit of time preparing for her bid to become principal of Marysburg High and, combined with regular hookups with Lucas, doesn’t seem to spend a lot of time with Belle. For her part, Belle is hooking up with someone else and it doesn’t seem to bother her that she and Tess aren’t glued at the hip. When I was single and on holiday with another single friend we were always together so this was a novel depiction for me.

Most of the story revolves around Tess and Lucas.  I like a lot of interaction between the main characters in a romance regardless, but it was especially necessary because I needed to believe they fall in love and are willing to uproot their lives after only a very short space of time. Tess and Lucas quickly get into pretty deep conversations and take a little time to get to the sex (but when they do they go at it like very happy bunnies) and I was convinced there was more to them than physical attraction. There were a few times though that the deep conversations and emotionally revealing moments felt a little forced; as if I saw the authorial hand pushing me to the realisation that these two belonged together rather than it being organic.

The end was a bit rushed, with Lucas and Tess having to come up with a workable plan to continue their relationship beyond the island. I could have used a little more breathing space between some of it and a little more details on other aspects. I did believe it though. And, the epilogue, showing readers life two years later did plenty of demonstrate all was well in the Dunn-Karlsson pairing too.

→ Kaetrin
Previous article: REVIEW: Alya and the Three Cats by Amina Hachimi Alaoui, illustrations by Maya Fidawi
Next Post: What Janine is Reading and Listening to: This and That