I think this book is a great example of how expectations and back blurb copy can color a reading experience. When I read “Whistlin’ Dixie in a Nor’Easter,” I knew there was a sequel and therefore some loose ends to Leelee Satterfield’s story. It wasn’t until I posted my review for the first book that I found out there is going to be a third book in the series. When I started this book however, I still thought that some relationships left unfinished would be explored here and that Leelee would progress from where we’d left her in “Nor’Easter.” Alas, not so. 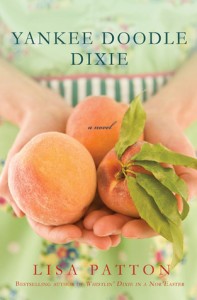 At loose ends after selling the Inn she’d run in Vermont, transplanted Tennessean Leelee Satterfield finds that her new life back in Memphis isn’t quite the return to Home Sweet Home that she thought it would be. Now separated from her cheating husband – whose dream it was to move to Vermont and run that inn – she is living in a rental house with a nosey neighbor who never met an “at home party” selling business he didn’t embrace, working at a radio station, juggling work with being a single mom and reconnecting with her three best friends and her childhood nurse, Kissee. When a station promotion brings her in contact with a rock star she’s idolized since her teenage years, Leelee is thrilled when Liam White notices her and gives her the rock star rush job. But his attention might just cost Leelee her job. Plus her heart can’t seem to let go of the man she thought shared her feelings back in Vermont.

At the end of “Nor’Easter,” Leelee seemed to have learned how to stand on her own two feet and be her own person. After a lifetime of having first her father and then her husband make most of the decisions of her life, she had taken charge and proved to herself and others that she could do just fine on her own. She and Peter had also taken the first step in what Leelee hoped would turn into a romantic relationship. When I picked up “Yankee Doodle Dixie” I thought Leelee would progress onward and upward. Based on the book blurb, I thought that she would quickly open a similar business as she’d had in Vermont. I thought she and Peter might get their feelings sorted. I was wrong.

Instead Leelee seems to have regressed a bit. It’s quickly apparent that the thing with Peter isn’t going anywhere – at least in this book. Leelee then falls back into the same “let the man run the relationship” thing with Liam that she’s done her whole life. There are risks to it that she knows up front plus she’s got Kissee telling her to watch her step with this man. And her friends, who’ve watched her marriage implode, see nothing wrong in egging her on in questionable circumstances. Leelee does learn a powerful lesson about Liam and more importantly herself but I felt that I’d watched her take two steps forward in Vermont only to take a giant one backwards in Tennessee to finish only slightly ahead of where book one ended. I kept thinking, “has she learned nothing?”

The job situation Leelee finds herself in is also little better than her initial experience with the inn in Vermont. She’s doing drudge work for a maniacal boss and it’s making her miserable. On her way into her interview she even thought that she didn’t want to go through what she had in Vermont and yet there she is suffering through the same basic stuff. My thoughts on this were “I’ve read this before and it’s depressing me to see Leelee go through this again.”

The book wasn’t a total disappointment to me. The scenes of Leelee and her four friends reuniting and having fun were enjoyable. The Elvis Week stuff was a scream. I also liked Kissee though I think people might have trouble with her character. The lifelong love that she and Leelee feel comes through in their interactions but having an African-American in role of someone who used to be “the help,” even though Leelee’s always viewed Kissee as more a mother than her than her real one, is going to be a tough sell.

Leelee does pull herself together and begin to explore her past relationships and where she wants her future to go. She takes what she learned about herself running an inn and decides to start there with what made her happy in life. This is where the book picks up for me. It ends on a positive note with a set up for the future that I do want to read as I think this will be what I had hoped “YDD” would give me. Leelee seems to have straightened her life up but I had to wait too long for her epiphany and felt as if I were reading only a slightly different version of the book I’d already read. C