“He finds love on the eve of a war he doesn’t plan on surviving.

Dante knows the price of rebellion. The Grid created him in its likeness, turning him into a killing machine—tested, modified and enhanced to be a “better citizen”. Years may have passed since he escaped that freak show, but the scars are still fresh.

Without the mandatory implant, Steel scrapes by, living free of the Grid’s control. When a job goes bad, everyone around her dies, their minds crushed by the notorious Cardinal. But he doesn’t kill her. He takes her to a secret lair filled with fascinating, forbidden pre-Grid knowledge. Who is this man—ruthless murderer or eccentric loner?

Bad-mannered as she is, Dante can’t bring himself to silence the abrasive, cigarette-addicted Steel. Something about her calls to him, though trusting her could be a mistake. Should she betray him, it would wipe out years of patient waiting. Waiting while the Grid hunts him for the priceless information he carries within his living data vault. Waiting while his dish of revenge turns ice cold.

For Dante intends to go back. And this time, he intends to be the only one left standing.” 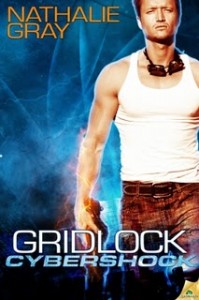 I’m not normally a post apocalyptic girl. Generally I run screaming from those arcs and books that are offered to us with this theme. Movies too. Don’t like them either. But only for you will I break that and read this one. Yep, the first story of yours I read made that much of an impression on me. And whoo-hoo Canada gets an apocalypse too! Equal opportunity bleak future. I remember reading in comments on the 2012 movie that Australia and Canada always feel left out. Glad to see they’ll go down with the rest of us. Just kidding.

This is a short novella so there’s not a lot of world building, mainly generic “life’s gonna suck” details of a world gone horribly bad. This time from the Internet taking over. I hadn’t read that scenario before but then see the first paragraph. From reviews of other post-apocalyptic books at DA, I get that you’re using shorthand descriptions common to this genre: old, decaying world down on the ground with remnants of things common to today’s reader and the new, shinier one up in the air.

Steel is a cool heroine who shoots first and then asks no questions later. She does what she wants or feels obligated or needs to do without any pansy assed hand wringing over it. If some dude’s gotta die, he dies. I love the image of her with white hair, loads of tats and piercings. She also does what she has to in order to survive including running drugs, giving blow jobs to someone other than the hero and looking out for number 1. You don’t give her much history but enough to flesh her out a bit, give her motivation for her actions, reactions and thoughts. She’s definitely kick ass but she also knows that life is easier if one flies below the radar and keeps out of sight. I love how Steel gives Dante revenge on the person who’d experimented on him and made his life hell.

The only reason she breaks with her “me first” attitude is that Dante saved her life when he could have taken it, does some small kindnesses for her when there was no reason to, he didn’t demand something in return, and is the only person to care about her and about whom she cares for in her life. He also trusts her with his i.d. and his home location. Also something not often done then. With such a sucky generalized world she lives in, I can see how this would mean a lot to her.

Dante isn’t an overly huge, macho guy. He’s barely taller than Steel! But he’s got presence which I love how you nail by the voice tone and calmness he shows. That’s all that was needed for me to believe in his stature, intelligence and determination. His choice and use of words caught my attention and is explained by the books he reads. Plus he’s a virgin! I’m not sure about whole “can kill with a thought” thing but then there’s a lot of weird stuff in this book without a lot of space for explanations. He’s fairly calm and steadfast about his decision to destroy the Bunker and try to break the Grid. His reasons are both personal because of what was done to him and general because of what he sees happening around him. He’s resigned to the fact that more than likely he’ll die doing what he’s planned. Now there’s a man on a mission.

The story has tense action that is well described. It wasn’t until after I’d finished reading the scene when Steel first escapes from Dante that I realized I was holding my breath with her waiting for the doors to the elevator to close. There’s some deus ex machina stuff with young woman who helps Steel and Dante escape but okay, they were kind of backed into a corner. She must be expanded on in someone else’s novella.

I was surprised at the delay period of 7 months from most of the action until the end. I would guess that the other stories in this series might take place during this interval but the way this is written, it can and does stand on its own. I kind of like the dragonfly dream that lures him out of his coma and back to life. But the declarations of love – at least on his part – seem quick. Steel has now had 7 months to live with him but one quickie and he’s a gonner for life? Hmmmm. That must have been some damn good sex. B