REVIEW: Damned If You Do by Marie Sexton 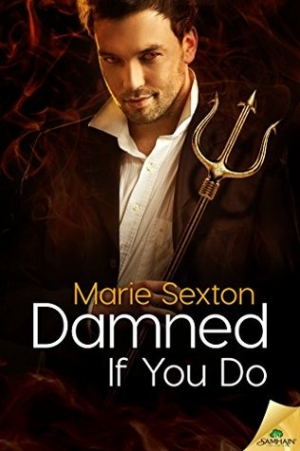 The path to temptation is paved with a hellish amount of paperwork.

Soul acquisition is a drag, but if Abaddon doesn’t catch up on his quota, he could be demoted to scooping poop for the Hounds of Hell. With a deadline hanging over him, he heads for the Bible Belt, looking for the perfect combination of sweetness and challenge.

Seth is a blind musician, part of a traveling tent revival. He’s cute, mystically talented, and quotes the Bible at every turn. His soul is pure enough to fill Abaddon’s quota for months to come, and Abaddon is determined to claim it.

The problem? There’s the revival foreman who watches Abaddon’s every move. Then there’s the mystery of Seth’s many unusual talents. Lastly, there’s Abaddon himself. He’s beginning to like Seth a bit too much. Maybe Seth deserves something better than damnation.

But Hell’s agenda isn’t negotiable, and time is running out. If Abaddon doesn’t play his cards right, he could condemn both of them to the worst fate of all—an eternity apart.

Warning: Contains a Bible-quoting twink and an irreverent devil who’ll do anything to avoid going “back to the office”. Also, snakes. Lots and lots of snakes

The last couple of books by this author did not work for me, but it shows how much I used to love her work that I just cannot bring myself to leave her books behind, so I keep buying them in hopes that the next one will work better. Sadly, it did not. You have to understand – I have a very soft spot for redemption stories, and one about angels and demons with a demon who failed to meet his quota of soul acquisition and faced demotion in Hell (which seemed to work like a corporate office) sounded like my catnip. I also want to stress again that I enjoy stories that deal with religions of all kinds, real or made–up. As long as the stories are not preachy, that is, and I found that this one preached a whole lot more than I could tolerate.

“To: Abaddon #325.63.7924.5 From: Satan, Prince of Darkness, Son of Perdition, Father of Lies, etc. Re: Failure to meet soul quota. It has come to our attention that you have not met your soul quota for the month. This is your third consecutive offense. You are hereby placed on formal probation. Failure to meet the quota within the next two weeks will result in demotion and immediate revocation of Earth-traveling privileges. Also: get a haircut.”

It is no wonder that after receiving an email like this from the Boss, Abaddon decides to get on with it, but he decides that in order to get ahead and maybe even get a promotion, instead of obtaining several regular, “pedestrian” souls, he will find somebody with a soul so pure, so bright that it will get him a bigger and faster reward. After reaching out to Earth with his demonic senses, he feels a shining soul that calls to him with its brightness.

So off to Bible Belt territory Abaddon goes, where he finds a young musician named Seth who is part of a revival. Seth is clearly a very gifted musician and a very devout servant of God. He also quotes the Bible all the time (I wanted to throw something at him by the time story was over, to be honest).

Abaddon attempts to get his soul almost right away, by making a bet with Seth as to who will play an instrument better. Seth did not initially understand that bet was not a joke, but supposedly that did not matter – if he had lost, his soul would have been forfeited. But he won and asked Abaddon to come to the revival.

Abaddon makes couple of pitiful attempts to get Seth’s soul, but very quickly he realizes that he cannot do it and falls in love with Seth instead.  It would be spoilerish to discuss the specifics, but let’s just say that Abaddon‘s views about Seth change in a predictable way, although with some interesting surprises along the way as well. I mean, this is romance and I do not think that I would be spoilering anything by saying that they will get a happy ending, right?

“What are you doing?” “I won’t hurt you.” He couldn’t have, even if the rules allowed it. He was overwhelmed by the tenderness that filled him. There was something so wonderful about knowing that Seth knew him for what he really was, and yet seeing Seth still standing there, not asking for anything at all. Just waiting, as if having a little chat with a devil on a bright Sunday morning in the deep woods of Alabama was the most natural thing in the world.”

I thought that Abaddon and Seth’s love story was pretty much an Instant Love, because only at the beginning does Abbadon believe that he is just hungry for Seth’s soul; almost immediately after that he realizes that he is in love with the boy.

““Not exactly.” “Then how—” “I don’t travel the same way you do. Your soul—” “Oh my gosh!” “It’s like a beacon to me, Seth. It’s brighter than any lighthouse. It took me a couple of days to spot it, but once I did, I only had to follow its light here.”

As I said before, I did not think that Abaddon’s character arc was a surprise, but I am not complaining about that – his potential redemption was the main reason why I bought the book. Seth surprised me as well, and I am not talking only about the sheer quantity of Bible quotes he subjected me to (this was just annoying to me) No, his backstory was a little unexpected and his situation was a little unexpected too and the resolution was while convenient also a little unexpected (not the whole resolution just a certain twist to it). These two were sweet together, but I wished for less Bible to be honest and for more chance for them to get to know each other rather than – ohh your soul is calling and yeah, I am in love with you.