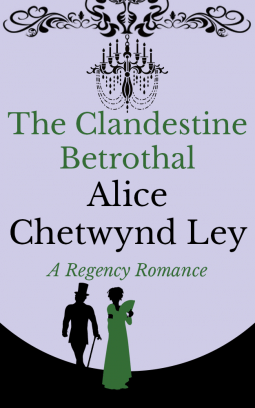 When 17-year-old Susan Fyfield is engaged to the dashing man-about-town Beau Eversley, it should make her the happiest girl in England.

After all, Beau is everything she could wish for: handsome, charming and from a good family. The trouble is, in announcing her betrothal to her aunt and sister, she has made one small oversight. With typical impetuosity, she has neglected to tell Beau himself.

Susan is surprised when Beau actually agrees to the plan: to help her out of the situation in which she has landed herself, not only will he consent to the pretence but will also allow her to break off the engagement whenever she chooses.

But then a revelation about Susan’s past casts a shadow on the history of her parentage and she realises deception is all around. Will she ever discover who her real mother and father actually were? Can she be destined to marry the man she truly loves?

“The Clandestine Betrothal” takes me back to older, “trad” Regency style books. It conforms to the Heyer model of the age, speech, dress and manners and has no sex. Some conventions might be contravened but at least the characters are aware of them and that they’re doing.

It has a fairly standard plot – Hugh “Beau” Eversley is a dashing man about town. All women – debutants and demimondains alike – want him but he’s nowhere near ready to settle down, marry and begin to fill his nursery. A friend of his beloved younger sister Georgie appears in his life and entanglements begin. Susan has a history of impetuousness and speaking without thinking which has now got her into a pickle. The more she tries to tell the truth, the less her aunt and cousin believe her.

As Beau tells Susan, more than once, she has the knack of depressing his pretentions with her truthful confessions and artless comments. But why is he going along with the pretend engagement? Compassion? Pity? Or is there something he sees in her beneath her youth and naiveté?

It all leads to a revelation about Susan’s background which astonishes and dismays her. What will she do now? And where will that take her? As Beau continues to aid Susan in her quest for her past, he begins to realize his feelings have changed from that of an honorary elder brother to something deeper. Has he come to this truth too late or is there still time for him to win the woman of his heart?

Both Beau and Susan change over the course of the story – slowly but believably. Here is a story that incorporates the sadness and tragedy that could result from marrying in that age with a lack of money and family approval. It’s not too hard to figure out who everyone is related to and work out what happened but it’s a nice, sweet romance with an honorable hero and heroine. B-