REVIEW: The Song of Orpheus by Tracy Barrett 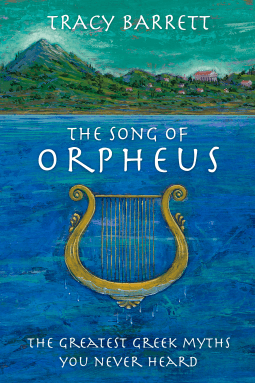 The Song of Orpheus: The Greatest Greek Myths You Never Heard is a funny, adventure-filled collection of wonderfully weird “new” Greek myths. This unforgettable collection spins tales of love and loss, hilariously vain superheroes, ancient robots, untrappable giant foxes, men reborn after being torn apart by dragons, and even the world’s first monkeys. A few of these tales may seem familiar at first, but be prepared for the unexpected. Others are wonderfully strange and puzzling. All of them are entertaining. All of them deserve to be better known.

Edith Hamilton’s “Mythology” was a well loved and well thumbed book by my bedside as I grew up. I figured I’d probably read all the Greek myths but when I saw the blurb for this collection, I was intrigued. I guess I hadn’t read them all, after all.

The book seems to be written for people who might not know that much about Greek myths and everyday ancient Greek life – e.g. there are explanations of what a lyre is and a lot of background on mythical characters. It also has a very modern writing style “They were all like no, you can’t do that, dead is dead…” – very YA. The plot twist here is that after Orpheus screwed up getting his wife back out of the Underworld, in his despair he wandered around and accidentally crashed a nymph party and pissed them off so that they tore him apart and his head turned into a talking rock. Now he’s got a quota of stories to tell in a certain time limit and coaxes modern listener into hearing the remaining 17 he needs to tell before he’ll be free. Here goes.

Orpheus gives some personal commentary on the nature of myths, the changing world since “his day” and yet how some things have stayed the same. He sounds un-historical about how he’s going to apologize to Eurydice for being such a bonehead and turning around before completely exiting the Underworld but then he’s had a lot of time to think about it. His hope is that she’s more forgiving than he was stupid. But he’s speaking and telling the stories as if he knows they’re myths. Rather like he’s had 3000 years to ponder things and has come to the conclusion that they were all made up – despite the fact that he figured in some of them. Suddenly his own experiences were just tall tales?

Orpheus warns the Listener that not all stories are happy ones, especially between immortals and humans both because humans grow old and die but also because immortals often gave little thought to how their actions might negatively human’s lives. I also got tired of the later stories all beginning with Orpheus fretting about the dwindling time he had left to tell the tales and worrying about not seeing Eurydice. I got it from the beginning.

Some are sad, some funny, some could be interpreted in various ways. Since the book seems to be aimed at people with some knowledge of these myths, it’s odd that there’s so much general background information about Greek myths included. There are some stories I’d never heard of here and some that sounded vaguely familiar but it was nice to get a refresher. B-