REVIEW: You Had Me at Hola by Alexis Daria 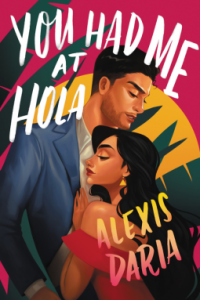 Leading Ladies do not end up on tabloid covers.

After a messy public breakup, soap opera darling Jasmine Lin Rodriguez finds her face splashed across the tabloids. When she returns to her hometown of New York City to film the starring role in a bilingual romantic comedy for the number one streaming service in the country, Jasmine figures her new “Leading Lady Plan” should be easy enough to follow—until a casting shake-up pairs her with telenovela hunk Ashton Suárez.

Leading Ladies don’t need a man to be happy.

After his last telenovela character was killed off, Ashton is worried his career is dead as well. Joining this new cast as a last-minute addition will give him the chance to show off his acting chops to American audiences and ping the radar of Hollywood casting agents. To make it work, he’ll need to generate smoking-hot on-screen chemistry with Jasmine. Easier said than done, especially when a disastrous first impression smothers the embers of whatever sexual heat they might have had.

Leading Ladies do not rebound with their new costars.

With their careers on the line, Jasmine and Ashton agree to rehearse in private. But rehearsal leads to kissing, and kissing leads to a behind-the-scenes romance worthy of a soap opera. While their on-screen performance improves, the media spotlight on Jasmine soon threatens to destroy her new image and expose Ashton’s most closely guarded secret.

You had me at this cover. I saw it and just had to know what this book was all about. The blurb sounded interesting and I was excited about the multicultural aspects. But I’m afraid only part of it worked for me.

“You Had Me at Hola” certainly checks diversity boxes – Jasmine and Ashton are both from Puerto Rican families and all of Jasmine’s twelve Nuyorican cousins are biracial. The cast they’re working with on the show are all Latinx and there is one trans character (though he’s not a big part of the book) as well as a non binary assistant. Plus a special intimacy coordinator on set who deals with consent to be sure there are safe spaces for everyone, Ashton, too!

In the past, we’ve had reviews which mention and had readers complain of how foreign languages are used in majority English language books. Here there is lots of Spanish – some is sprinkled one word at a time in an otherwise English sentence while at other times entire sentences are in Spanish. There is enough context around these to get an idea what is being said and it all felt natural. Yet since I’m not a Spanish speaker, I can’t vouch for this.

I liked the peek into the differences in Latinx cultures. Ashton is Puerto Rican and worried that audiences might not accept him as much as they would a Spanish actor. Raised as a Nuyorican, Jasmine is part Puerto Rican (father) and part Philipino (mother) and mainly spoke English at home and thus, to the surprise of her castmates, doesn’t speak Spanish as fluently as they thought she would. Ashton (real name Angel Luis) also has to deal with colorism in the Latinx community. He tells Jasmine it isn’t as bad as it used to be but he still worries about tanning.

The scenes of Jasmine and Ashton talking about their experiences in soap operas and telenovelas was fun. Both have a love/hate relationship with the vehicles that have launched them but I was tickled that Jasmine’s is still much more love.

At first I liked the idea of some chapters being told as the shooting script and filming of the show. Then the picky details of filming began to bore me. There are a ton of cast characters and crew for the show and it seemed that as each was introduced we had to get a run down of what they looked like and what they were wearing. Not needed. There were also a lot of little info dumps and moments when Jasmine or Ashton would mentally wander off and spend 3/4 of a page thinking about something so that by the time the dialog started up again, I’d lost the thread of conversation.

Then there was the scene where intimacy coordinator Vera was assisting Jasmine and Ashton work out the blocking of the first kiss scene. I think this was meant to be a slow burn sexy scene but instead it became dry and clinical. Blah. After they have to try seventeen takes of The Kiss and still they, plus the entire crew, feel “something is missing,” it seemed a metaphor for how I feel about their romance.

No matter how many times I was told that Ashton and Jasmine thought the other attractive and sexy, they didn’t interact due to Ashton’s fear for his privacy due to his son. He always withdraws from contact with anyone on set as soon as the rehearsal or shooting is done so as to building heat … yeah, nothing. It was not until halfway through the book that they began to spend any real time together and then suddenly BAM it was hot and steamy sexy times that seemed to spring out of nowhere.

The book also suffered from a pet peeve of mine which is lots of repetition and restating what we’ve already been told. Soon I was getting as irritated as Ashton’s father about Ashton’s constant obsession with the past, why he fears for his son, and that he will never let anyone into his life. I got it. I understood it. I understood it the first 4 times it was explained. It made sense but didn’t need to be on the page that many times. Jasmine had issues with her family that led to the way she craved attention and acceptance but these weren’t shown nearly as many times.

The final straw for me was the way Ashton managed to turn everything into how it affected him. The last argument he had with Jasmine cemented the feeling I had that she could do better. Sure Ashton’s handsome and has a darling son. His family are nice and I found myself liking his father better than I liked Ashton. Even the reconciliation scene fell flat for me and I wasn’t convinced he’d done all he could to earn Jasmine’s trust again. In the epilogue we’re supposed to see how wonderful everything is but honestly based on what I read, I’d still be holding my breath were I Jasmine. So good parts and not so good parts averaged to a C for me.