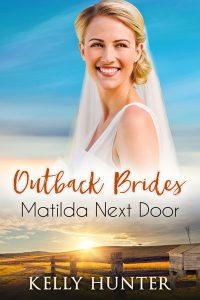 When a long-anticipated holiday takes an unexpected turn…

Aussie farm girl Matilda Moore kicks off her dream trip to London by flat-sitting for her childhood friend. But London is daunting, crowded and noisy, and that’s before Tilly finds a baby on the doorstep. There’s a note attached: “Henry, if you’re reading this, please know the worst has happened.”

Probability expert Henry Church has finally returned home to Wirralong, Australia, to see his grandparents when he gets a phone call from Tilly that breaks every statistical analysis. The probability of him being the father is marginal. Plus, he knows nothing about caring for a baby. Emotions and socializing are even bigger mysteries. He begs Tilly for help—can she cut her holiday short and bring the baby to Wirralong?

Tilly will do almost anything for her childhood best friend, but falling in love with him and his motherless baby is an emphatic no. Out of the question. Or is it?

I’m on an Aussie book roll lately. It’s been a while since I’ve taken the time to enjoy one of your books but this turns out to be a great one to get me back. Two childhood friends, both with some insecurities and issues, finally discover something that leads to the break through in their relationship – a double secret baby!

I adored Matilda who is the sturdy, get things done type of person. She’s had some past disappointments and a childhood of sometimes being called Silly Tilly. She’s resorted her plans and hopes, found something she enjoys doing, and always dreamed of a chance to travel a bit and see some places. Her glee at finally getting a chance to see the world is infectious.

“They had it all worked out and she could not wait. She’d recently added a polka-dot shirt to her wardrobe full of plaid. And a white jacket. White, no matter how impractical! With a tiny little white flower pattern on the lining. Flowers for her wardrobe. White-on-white flowers, and barely visible, but she knew they were there.”

Henry broke free of their small town so why can’t she? Even after twenty three hours in the air and the airline losing her luggage, she keeps her chin up, a smile on, and remembers the security code to turn off the apartment alarm after she initially forgets the fact that there is a security alarm. It might take a wee bit of encouragement to actually get her out onto the streets of London but she does give it a fair shot before deciding that there’s no place like home.

After a lifetime of living beside Henry’s grandmother, Tilly (and I) can understand why Henry needed to leave and, though Tilly worries about Henry’s grandparents (mostly his grandfather given the fact that Beth is vinegar and spite personified), she realizes why Henry doesn’t visit often. Frankly from how his grandmother acts, I’m surprised anyone would willingly be around her. Sure, now she seems to be sliding into Alzheimers now but that isn’t the cause of her lashing into people and cutting them down back then. Henry’s childhood could be summed up as “not nice.” It’s little wonder to Henry that he has no confidence around people and especially around women.

They both have their insecurities which will be allowed to come out and play a little before being discussed.

A handful of little words, a clutch of syllables lightly spoken, but they warmed him through, and this was why he’d wanted to call her. Not just to provide support if she needed it but to take heart from her in return.
‘I touch base with you there because I miss you being here, right next door,’ he offered gruffly. ‘I touch base because I like the thought of you in my space and want you to feel at home there and supported in a way you’ve always made me feel. I call because I want to.’

Her eyes shimmered and for a moment he thought there might be tears. Clearly more words were required. Better words. But he didn’t have any.

As Tilly tells her mother, she got her bluntness naturally. Even Henry is a little gobsmacked when Tilly comes right out and asks him questions that most books would let dangle for 100 pages. I was stunned, too, but happy. Then Henry and Tilly talk. Actually talk about things. Imagine that. It does take a little while before they’re finally on the same page, romantically. But that definitely is due to a few crossed signals that could happen to anyone, Henry not feeling confident, and Tilly’s father warning Henry off a three-years-younger Tilly when they were teens. Henry’s balls might have been mentioned in that conversation. But Henry’s always loved Tilly.

‘Star Wars quotes? Still?’ She could make him smile. Always had.

‘What can I say? I’m loyal to the classics. Besides, you are going to call me tomorrow.’

Confidence looked good on her. His shirt looked particularly good on her. ‘Only if you put my sock drawer back the way it was.’

‘Hand over heart, I’ll do it.’ She suited action to words, and then started rubbing her hand over her heart. Breast. Heart. Breast … ‘How can this be cotton material when it feels like silk?’

‘Matilda, please stop doing whatever it is you’re doing to that shirt.’ Was that a pebbled nipple?

He closed his eyes. Invoked a prayer. Wished for Scotty to beam him right there.

Australia is woven into Tilly’s and Henry’s hearts. One of the reasons Tilly isn’t as thrilled with London as she’d hoped is because it doesn’t have the blue sky she loves. Henry secretly felt the same way when he first got to rainy, overcast England. Blue sky and red dirt, that’s what these two long for.

“And the sky here, Henry. I don’t mean to be picky, but please tell me it turns blue on occasion.’

The secret baby aspect of the story is both hilarious and heartbreaking. Since neither is expecting little Rowan to enter their lives, desperation while learning how to take care of a baby adds the funny. The reason why Rowan suddenly enters their lives is the sad. I was delighted that Rowan’s mother wasn’t turned into an evil bitch. Rowan is actually a plot moppet but in the best of ways. Thank you that Henry is also allowed to have his moments of anger at how things were done and how he nearly didn’t know about Rowan – something that evokes memories in him of how he never knew his own father.

I would have liked a bit more closure on Henry’s relationship with his grandfather. His grandmother seems a lost cause but even though Henry finally lets out some of the pain and questions his grandfather about why the man never stood up for him during Henry’s childhood, Henry doesn’t get any answers. There are also a few editing issues I saw but these are mainly minor name and age things.

But this – ah this part shows that even if Tilly’s parents think they might be moving too fast, Henry and Tilly are right.

“She shook her head at his hesitation, not censure. Knowing. ‘Those three little words scare you senseless, don’t they?’

‘Have you ever said them before?’

He nodded and remembered to breathe again when she reached up to draw his head down so she could rest her forehead against his.

His ‘I’ was rough, but he inhabited it fully, and poured all that he was into the kiss that followed.

‘Love.’ Just because he had trouble saying it, didn’t mean he couldn’t feel it, deep down beneath the barriers that had protected him for so long. ‘Love,’ he said again, more certain that he had so much to give and that with patience, and this woman beside him, he would find a way to let it flow to her more easily. ‘I love.’

‘Such an overachiever,’ she mocked gently. ‘Already ahead of the teacher.’

So grateful to have her as his teacher.

‘I love you too.’ A quiet kiss, brimming with unspoken promises. ‘And you don’t have to say it all the time, you big, gorgeous still river of a man, but every now and again I’m going to want to hear it.’

Henry and Tilly will be fine because they love each other, always have, and because they talk, and because Tilly believes in Henry which makes him want to be the best for her. They have faced their demons, kicked those demons around a bit, and come out on the other side. Okay, I’ll stop quoting half the book now. B+

→ Jayne
Previous article: REVIEW: Sweetest in the Gale by Olivia Dade
Next Post: REVIEW: You Had Me at Hola by Alexis Daria