REVIEW: Thinking of You by Jill Mansell

When Ginny Holland’s daughter heads off to university, Ginny is left with a severe case of empty nest syndrome. To make matters worse, the first gorgeous man she’s laid eyes on in years has just accused her of shoplifting. So, in need of a bit of company, Ginny decides to advertise for a lodger, but what she gets is lovelorn Laurel. With Laurel comes her dangerously charming brother, Perry and the offer of a great new job, and things begin looking up…until Ginny realizes that her potential boss is all too familiar. Is it too late for Ginny to set things right after an anything but desirable first impression?

When I read the blurb for “Thinking of You,” I liked the idea of a slightly older heroine finding love later in life. I didn’t realize this was a reissue until I started to read it. I have no idea if it’s been changed any since 2007 but then there doesn’t seem to be much that might influence the plot that has changed between then and now. 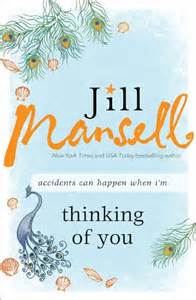 The book kicks off with quite an opening set up of different characters, their relationships and the plot threads. It’s often funny in an amusing, ironic sort of way with some LOL moments mixed in. This is intercut with a bit of darker shadings which round out the main characters and further the plot. Still everyone is distinct and I never lost sight of who they all were and how they fitted into the story.

The plot threads are believable and not twisted into pretzels of WTFery. Often I can’t get past some bizarre set up an author employs to use a certain setting or a have characters hold certain jobs or interact in such-and-such a way. Not so here. Empty nest syndrome, adultery, broken hearts, ladies men, first year of college – all are plausible and not eye rolling.

That being said, I could tell in which direction a lot of the plot was headed and how the characters would behave and react. When this or that occurred, I wasn’t all that surprised.

“Actually I caught her shoplifting,” said Finn. This is far from a meet-cute beginning for Finn and Ginny. In fact, he makes his – loud – public accusation, which reduces Ginny to tears and that worst of all things for the English – public embarrassment. This couple was going to have a lot to work out before their HEA

Except, I didn’t get enough of that. I needed a bit more romance. Yes, I can see this is a times more women’s fiction and with the number of characters involved it’s hard to get in depth with all their stories but for Ginny and Finn I wanted more. One cattus interruptus – which is hilarious – and one completed sex scene and that’s it? I did like that they talk a bit and discuss their lives outside of how they feel about each other but I would loved to have more of them together.

Then comes the come-upppance and payback period. Don’t get me wrong – I wanted all these outcomes. I was hoping to see the villains get served with their just desserts and the protagonists triumph over them. But it was just all too neat and tidy. Like a list being checked off and bows being wrapped too tidily. Each asshole gets hoisted on his or her own petard, generally publicly and often with the assistance of the person most wronged. It’s very satisfying and there’s little of the martyr – I must be nice and not gloat over my enemy because I’m the heroine or hero – involved. But it’s almost too much that this many wronged people will get justice 1-2-3 one after another as the book winds down. It’s too clockwork-y, too assembly line-ish.

I enjoyed getting to know these people and peeking in on their lives. I felt good when the villains were taken care of and the protagonists found happiness. But the first aspect felt too perfect and the second felt lacking. C