PLEASE NOTE: It is impossible to summarize the plot of this book without disclosing some spoilers, including the identities of the main characters. Readers who prefer to avoid spoilers are advised not to read this review. 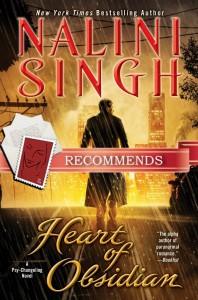 Since his introduction back in Visions of Heat, we’ve learned many things about former Councilor Kaleb Krychek. Kaleb is cold, ruthless, and lethal. He has been searching for someone, or something, for years. And he is capable of anything – but does that include love?

When we last saw him in Tangle of Need, Kaleb had at last found what he was looking for. And it was indeed a someone – a woman. Now, at the beginning of Heart of Obsidian, Kaleb and the woman he has rescued, or perhaps merely transported from one prison to another, face off.

What Kaleb demands of her is reasonable enough – that she eat, drink and shower. But the woman refuses, crouching and hissing at Kaleb instead. Her arms are scratched, her hair a tangle, her mind a shifting snarl of a maze, and the person she once was no longer there.

Still, she does seem to possess intelligence, and she does eat and drink after Kaleb samples the food and the beverage. Kaleb realizes he must negotiate with her, and provide, as much as he can, the illusion that he is giving her freedom. This despite the fact that Kaleb knows he has no intention of ever letting her go.

Though Kaleb’s captive recognizes exactly how dangerous he is, some part of her mind feels oddly safe, and it is this sense of safety that restores order to her thoughts by dissolving the maze she had created to thwart anyone who tried to control her psychically.

Kaleb has brought his quarry to an isolated but peaceful and calming environment, a large house that seems to have been thoughtfully designed, though Kaleb himself does not inhabit most of its rooms. He confines himself to a couple, and allows the woman he brought here to roam. As she does, she finds that objects in the house seem strangely familiar, though she cannot place them.

She does, however, eventually recall some parts of her past, including who she is – Sahara Kyriakus, of the Nightstar PsyClan. As she comes into greater awareness of herself, of who she is and what she wants, Sahara understand that she is attracted to Kaleb, and that this attraction could be her undoing.

That Kaleb wants her is clear – but does he want her for herself, or for the secret ability she has hidden, which, in the wrong hands, could make her the ultimate weapon?

Kaleb, realizing that Sahara is drawn to him, allows her to touch him. He knows that Sahara’s Silence is broken, and that sex can bond two people. It is a calculated decision for Kaleb to risk his own Silence by sleeping with Sahara, if such an opportunity presents itself, because a physical bond may make it harder for her to attempt to leave him.

But Sahara recognizes that the day when she is strong enough to leave will arrive, and that when it comes, she must be prepared. Kaleb, as the serial-killing Santano Enrique’s protégé, may have committed heinous crimes. Nor is Kaleb averse to doing away with the Psy race altogether – if certain conditions demand it.

Why, then, does Sahara feel safe with Kaleb? Why does part of her mind, which has memory gaps, insist he would never hurt her? Sahara was only sixteen when her earlier captors took her, and Kaleb would have been twenty-two at the time, so they would likely not have been lovers. Did they share some kind of connection, and if so, what was it?

Complicating Sahara and Kaleb’s relationship are attacks by the renegade group Pure Psy; attacks which Kaleb does what he can to counter. Is he doing so for reasons of his own, for ulterior motives, or is he in fact behind Pure Psy’s actions?

While Sahara agonizes over these questions, Kaleb waits for the other shoe to drop – for Sahara to remember the role he played in her earlier life. For when she does, Kaleb is certain she will not forgive his past actions, and he will then have to face her judgment – and her ability, which is the only one that can match and perhaps even outmatch his own.

I’ve been eagerly awaiting the release of Heart of Obsidian and in most regards, this book does not disappoint. Stark, romantic, and satisfying, the novel hinges on its hero’s dark magnetism.

The storyline is well plotted, entertaining and exciting. Because Kaleb is such an important figure in the Psy/changeling world, he features in the Psy politics subplots of this book as well as in the romantic main storyline. I’ll discuss the subplots first.

Of course, the question of whether or not Kaleb is the Ghost is answered in this novel, but while I have some caveats about how this is dealt with, I will not go into them here so as not to spoil the answer, which comes late in the novel.

It is refreshing that we spend little time with the changelings in this book, but their cameos are significant enough to the plot events that I did not mind their absence from the first half of the book. Rather, it was great to read a Psy/Psy romantic relationship, which feels less familiar and more interesting at this point.

There are some wonderful scenes with Aden and Vasic which reveal their strengths and their vulnerabilities, their loyalty to each other and their isolation and loneliness. I am looking forward to spending more time in the company of these characters in future books.

Heart of Obsidian feels more cohesive than most of the Psy/changeling books, with very few excursions away from the main characters. The fact that Kaleb and/or Sahara are in almost every scene allows for a close focus on the romance, while at the same time forwarding the Psy/changeling world political plotline, with some big developments on the latter front.

(Although I have to ask: am I the only one who would prefer to see free, democratic elections replace the Psy Council?)

In this book, the two aspects of the series – romance and political tensions — are woven together so tightly they are almost inseparable, something I really appreciated. But because of that, when the Kaleb/Sahara arcs are disrupted by the rare scene spent with Pure Psy or with a news bulletin, I was irritated and anxious to get back to the main characters.

About those main characters. The deeper development of Kaleb reveals a duality in him, the outward exterior of perfect Silence which conceals a “flaw” that could be his downfall. With Sahara, Kaleb is an enigma, ruthlessly pragmatic one moment, dangerously passionate the next, and calm and cool in the following instant. All this makes him a puzzle both Sahara and the reader would like to solve, and the pieces of this puzzle are only gradually filled in.

While I’m not convinced Sahara is Kaleb’s equal in strength and power, she is nonetheless no wilting violet, and I see her as a good match for him, someone who balances out his coldness and dangerous ambition with by grounding him in her warmth and stability.

That Sahara, who begins the book approximating a madwoman, is the one to serve this function is ironic, interesting, and a testament to her essential health and wholeness.

I found myself questioning whether someone who spent over seven years in captivity under horrifying circumstances could ever be as healthy as Sahara is presented (I felt her traumas were overshadowed by Kaleb’s), but I never doubted that Sahara was good for Kaleb.

Nor did I doubt that Kaleb was good for Sahara, which is quite a feat considering his effed up childhood, his twisted actions in adulthood, his warped propensity to contemplate destroying the Net, and his admission that where most people are concerned, he is incapable of empathy.

The thing is, though, that from the beginning, Kaleb is unfailingly thoughtful to Sahara, focused on her, honest with her, and shows her every concern. I did wonder, though, that the messed up aspects of Kaleb didn’t give Sahara even more of a pause.

Not many people are incapable of empathy for 99% of sentient beings. If I were contemplating spending the rest of my life with someone, I would want that person to be able to care about the people I care about.

It is also mentioned in Sahara’s thoughts that Kaleb didn’t rise to the Council without getting his hands dirty, but the details of these killings are conveniently glossed over. And then there is the fact that destroying the PsyNet, an idea Kaleb takes quite seriously, is, not to put too fine a point on it, nothing less than genocide.

There is a point in the story in which Sahara thinks that Kaleb is not as bad as he believes, and another in which she tells him that while she would not condone some of the things he did or considered doing, because she too did something morally ambiguous once, she would never judge him for his own moral missteps. Neither one of these statements convinced me to share Sahara’s opinions of Kaleb.

Ultimately, I concluded that this book wants to have it both ways: On the one hand, we are intended to love the fact that Kaleb is such a badass that he could conceivably lay waste to most of his own race. On the other hand we are also meant to agree with Sahara that Kaleb isn’t really a bad guy after all.

If this works in the context of the novel, it’s because like Sahara, the reader is caught up in Kaleb’s power, magnetism, consideration and protectiveness, and in the romance of Sahara being a rare and precious exception to Kaleb’s general lack of empathy and inability to connect with other people.

Isn’t it most people’s fantasy, in some small, secret, immature part of the soul, to be loved to the exclusion of all other considerations? This book taps into that fantasy.

And if we fully buy into that fantasy while reading Heart of Obsidian, then it doesn’t matter that Kaleb is basically a sociopath with an asterisk next to the word: *Sahara Kyriakus and perhaps a few others exempted. It doesn’t matter because the novel makes it damned romantic.

That in itself is disturbing. But the fact is, I enjoyed reading about Kaleb and Sahara’s love, and even about the lengths they were willing to go to for each other. Philosophical and moral qualms aside, Heart of Obsidian was quite a compelling read. I rate it a B+.