One of my favorite historical re-reads is The Madness of Lord Ian Mackenzie and in Tiger Magic I think I see hints of the same character, although not the same romantic arc. This is the fifth book in the Shifters Unbound series which is an alternate reality contemporary that makes a strong social statement. Shifters, viewed as dangerous animals, are collared and tagged by the government. There are strong tensions between humans and shifters and it is considered taboo to mingle with them. Of course, taboo for some means exciting so there is no shortage of humans that wander into the Shiftertowns looking for a taste of the exotic. 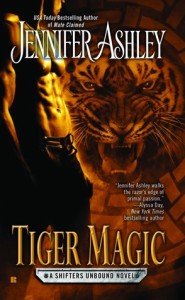 Discussions of otherness is the very heart of the conflict in the Shifters Unbound series, even if it isn’t explicitly stated. Tiger has no name or clan. He is a wild shifter, created in a lab and has escaped. He has been mated before and knows the feelings and sensations brought on by the mate bond and when he sees Carly Randal, he recognizes her as generating similar, but even stronger feelings. Because Tiger has been brought up outside of the world, he has little understanding of the customs and constraints of human and Shifters alike. He acts primarily on instinct and his innate Shifter thought process.

Carly begins the story engaged to a man who is cheating on her and at a loss at how to recover given that her work life was tied up in her fiancee. Carly appreciates being rescued by Tiger but she’s confused by his sudden appearance in her life and his unwillingness to leave her side. But because she’s been seen with him and because he’s being hunted by the government, Carly’s life is endangered. The beginning of the story was slow and the romance requires the reader to take huge leaps. I’m always disappointed in a romance when the falling in love portion is simply skipped over and that’s pretty much what happens in the story. Carly is swept up into the Shiftertown politics and the conflict over who controls Tiger.

There are two story arcs within this book – the romance and the mystery of Tiger’s origin. Why was he created and what do they want with him? The reveal is a little incredible although it was one way to resolve (and cement) Tiger’s place within Shiftertown.

Tiger’s presence in Shiftertown presented a power imbalance. He was not part of any clan and he was quite powerful. He didn’t accede to any one alpha’s rulings. Because Tiger stood outside the clan structure, there was little advancement in the overall mythology of the Shifters and the fae and their struggle for equality with the humans. However, because of the genetic testing on Tiger there is possibility this will have implications in future books.

While I had wished for more movement in the overall series arc and struggled a bit with the great initial leaps I was required to take in order to swallow the romance, Carly and Tiger are a sweet coupling and I appreciate the social commentary wrapped up in a sexy paranormal romance. We aren’t just getting hot Tiger loving in these books. B-