REVIEW: The Second Seduction of a Lady by Miranda Neville

I’ve enjoyed all four books in your Burgundy Club series so when I heard you were starting a new series and putting out a prequel novella, I snapped it up from Edelweiss. Set in the English countryside in 1793, The Second Seduction of a Lady is a story of reunited lovers. 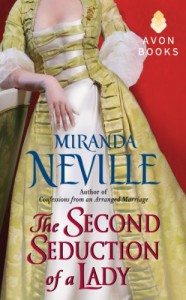 The novella begins with Austen-style omniscient narration which tells the reader that Eleanor Hardwick’s record for common sense is nearly unblemished. The one blemish, as it turns out, is Max Quinton. Eleanor has never believed in marriage nor intended to marry, but when she was twenty-five, Eleanor’s conviction slipped.

Max Quinton turned out to be a cad, and Eleanor found out before she married him – but not before she’d given him her “virtue.” While Max sent her letters pleading his case, Eleanor waited to see if pregnancy would force her to marry him. Thankfully, it didn’t, and Eleanor returned his letters unopened.

Max and Eleanor meet again when she is visiting her delightful seventeen year old cousin Caro, as well Caro’s unpleasant mother and brother. Max is the guardian of the young heir to the neighboring estate, Robert, and Robert is about to reach his majority.

After a brief, cold, wet greeting from Eleanor on a riverbank, Max resolves to win back her affections. He fell in love with Eleanor five years ago and never got over her loss. As Max engineers meetings with Eleanor, affording Robert and Caro opportunities to fall into infatuation, the story of Eleanor and Max’s first meeting is told in flashbacks.

Max knows he screwed up back then, but he wants another chance with Eleanor. And the more time Eleanor spends with Max, the more she questions whether she was right to be so unforgiving. Meanwhile, Caro and Robert get closer than is wise, and Max is not exactly blameless for that. Will Eleanor, a woman set against marriage, find it in her heart not only to forgive him, but to accept his suit?

The Second Seduction of a Lady has a less humorous and more serious tone than most of your books, and reminded me of the 1990s traditional regencies published by Signet. Those little red books frequently had countryside settings, lovers parted by misunderstanding or an interfering third party, and occasionally, a punishing kiss, all of which can be found here. The heroines sometimes felt a bit starchy, and that description fits Eleanor, too.

Though there were Signet regencies I loved, more often I liked those books mildly. Many of them were a pleasant way to pass the time. I had a similar experience with The Second Seduction of a Lady.

The novella gives a charming depiction of a countryside neighborhood and several nice touches in side characters who bring that milieu to life. It also contains sex scenes, unlike most trad regencies. Perhaps because these are shown in the less-experienced heroine’s POV, the sex scenes contained some awkward descriptions of body parts, such as “the core he has once filled.” There was also some conflation (to borrow a word from Janet/Robin) of love and sex that didn’t thrill me.

I’ve written in the past about how much I enjoy your writing style and especially your characterization. There is typically a genuine warmth and vulnerability to your characters that makes them appeal to me in a way that feels very natural. But I didn’t connect with Eleanor and Max to the same degree.

I said before that Eleanor could seem a bit starchy at times. Her views on marriage seemed rigid to me, too. While we were told early on that her parents were ill-suited to one another and their marriage made Eleanor’s mother unhappy, I think I needed her mother’s unhappiness and Eleanor’s role in observing it or responding to it as a child to be shown or discussed in greater depth for me to understand why Eleanor was so set against marriage.

Max was a livelier character than Eleanor, but I had an issue with him as well. While Eleanor described herself as “managing” I saw Max as much more managing since he engineered situations more than once. There were times he behaved in a manipulative or high-handed fashion where Eleanor was concerned.

[spoiler]For example, when Max and Eleanor pursue Robert and Caro who have eloped to Gretna Green, Max lets it be known that he and Eleanor also plan to marry, even though Eleanor has not agreed to marry him. This willingness to entrap Eleanor did not sit well with me.
[/spoiler]

I understand intellectually that Max was devastated to lose Eleanor five years before, but if this was the reason for his high-handedness, I wish I had been made to feel the pain that loss brought him more. Furthermore, I wanted him to understand that what he’d done was wrong. In some cases he did understand his mistakes, took responsibility for them, and apologized, but not in all instances.

With both these characters, I wanted more of the vulnerability you usually depict so well. But they both had likeable qualities too. Eleanor loved her large family and looked out for Caro. She had a quirky love for fashionable hats and a softness that emerged when Max got closer to her. Max had charm and evident competence. He was also devoted to Eleanor in his heart.

I read this novella pretty fast, and toward the end, I even got a little emotional. There were some clever turns of phrase, too. I missed the humor that characterizes your books, but the writing itself was mostly good and the story readable. I’m giving it a C.