In all fairness, the title does promise what is delivered. But I found that I didn’t care for a woman who would consider this acceptable behavior. The romance is like one of the heroine’s mother’s fairy cakes or ‘light as air’ sponge cakes. And even the farting dog and images of Amy hauling a wheelbarrow around during her daily work as a garden designer aren’t enough to ground this story for me. Perhaps had I read it 25 years ago, I could have totally bought into it but today reality has reared its ugly head too often and I need more to get me to believe in a Royal HEA. I feel that this review is going to be like slamming the oven door on the souffle of this book. 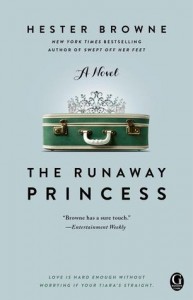 Amy Wilde is a simple Yorkshire lass who’s found her niche in London as a garden designer. She works with her friend Ted, who supplies a lot of the muscle, and lives with posh society roomie Jo, who can keep you entertained for hours with the scoop on her outrageous family, and dog Badger, who never met a smelly thing he didn’t want to roll in. Jo specializes in wild parties and there’s always a crowd who show up at their flat but one night a truly over the top man appears, complete with an entourage that includes three pencil thin women and one harried looking man. Amy and the harried man, who introduces himself as Leo, talk and flirt a little as Leo attempts to fix some damage that OTT Rolf caused. Amy’s natural Yorkshire reticence keeps her from being as verbally dazzling as Jo keeps trying to help Amy to be but Leo reappears anyway and the two begin to date.

Leo’s obviously loaded and well known in the ritzy circles of London but Amy believes that he’s the investment banker he’s introduced himself as. It takes Jo to open Amy’s eyes to the fact that Leo is actually Prince Leopold of Nirona, a wealthy European principality. Suddenly Amy’s in a whole new world and feeling overwhelmed by it. Still, she can’t fight her attraction to Leo any more than he seems to want to fight his with her. A romantic proposal later and Amy’s now being featured – and trashed – in the paparazzi tabloid website YoungHot&Royal. It takes a sudden reversal of the succession at his grandfather’s deathbed to thrust Leo from fifth in line to being the Crown Prince. And where Amy thought she could manage being the wife of a minor royal, now she’s not so sure if she can handle what her future will be if she stays the course. But…will she?

I used to want to be a Princess – lovely clothes, priceless jewelry, adoring crowds, what’s not to want? Then I grew up and followed – along with the world – the saga of Princess Di and the Duchess of York and, backdating a bit, learned that Princess Grace was miserable too. Suddenly, the perks didn’t seem like nearly enough for what you’d have to give up – which seems to basically be your entire life. And not only your life but that of any one near or dear to you who might make a salacious story if only as a 9 day wonder has to deal with it as well. Plus most of the time, it ends in divorce or bitter unhappiness. Really, who wants this? Okay, there are some who seem willing but for me, the price is far too high.

So, in the beginning, I can understand Amy’s heel dragging and dismay as she gets a wider and more complete glimpse of what she’s facing. I like that the book is upfront about the high cost of looking good enough to be front page all the time, the effort and constant maintenance that it takes to be a modern Royal – even if only a second tier one. The routine, file books and organizational calendars could be soul sucking. Knowing the press and paparazzi are lurking to catch you out and gleefully publish the results could make me want to hide under a flowerpot. Just the duties alone would be daunting but add to it the complex mix of years-in-the-making issues Amy and her family have got simmering and I might have not only second but fifth thoughts as well. And certainly the time to question if this is truly what she wants should be now since she already realizes that she and Leo really aren’t talking things out.

But to do a runner as she does? Whoa, talk about a way to bring her relationship with Leo crashing down because believe me, were I Leo, I would take a few steps back and reconsider given Amy’s (repeat) actions and her lack of communication with him. This is the heart of my problem with this book. These two are supposed to be building towards a lifetime together and they can’t even talk to each other. It was obvious to me that they were both having issues – Leo just a little but Amy a whole lot. Lotsa lot.

Let me elaborate. Were I Leo, I would be very hesitant about picking things back up with Amy because of the way she lied by omission to him. The issue with her family is one thing but the crack Nirona spin doctors and lawyers are ready to do damage control about that. No, it’s the fact that this woman who said she loved me and was going to spend a life with me hadn’t trusted me. Not with a major secret in her life but also not with her fears, doubts and issues with my heritage/lifestyle and what would be expected of her and also of how my family was used to using money to fix all their problems. There’s lip firming, words bitten back and silences enough here to raise all kinds of red flags. And all that’s before Amy’s runner. Were I on the receiving end of that I would be as devastated as Leo and need a lot of time to be sure Amy was over her fears and ready for what her future could be. I would need a lot of talking and airing of the issues we hadn’t talked about much less dealt with before being ready to take the plunge – whether I was still in love or not. As Amy showed, love doesn’t conquer all fears nor make everything all right.

I also felt that as much as Amy does try to meet Leo in the middle between their two former lifestyles – it’s Leo who changes and gives and meets her the most. Amy does change, – some – and does learn but it’s Leo who bends the most. Leo who’s almost a saint anyway. Seriously, a few flaws would have made him more real to me instead of him coming off like a cardboard cutout paper doll. He’s wonderful, handsome, intelligent, thoughtful, charming, polite – a great chap all around – but he’s not real. He’s a fairy tale and I’ve lost my belief in real live fairy tales now.

Jo and Ted are fantastic characters and I ended up enjoying their presence in scenes a bit more than Amy’s. Generally I adore chick lit but I have to see the heroine grow and it helps if I can at least sympathize with if not like her. Here, I felt I really needed Leo’s side of the story since a lot of the time I felt like he was getting the shaft end of this relationship. Plus he’s too fantastic for any reality and Amy’s meltdowns and repressed feelings don’t make her the most sympathetic of heroines. I finished the book convinced they’re in love but not truly convinced that they’re ready for marriage or have a good shot at a HEA. Amy’s matured but I don’t think enough. Yet. C-