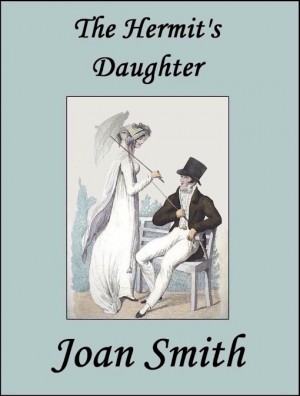 Sally Hermitage was daughter of the famous solicitor “The Hermit,” but unfortunately her father had not left his widow financially secure. So Sally was determined to see her sister married to the man she loved, Lord Derwent. But Derwent had a guardian, Lord Monstuart, who was just as determined to prevent his nephew from throwing himself away on Melanie. But Monstuart exhibited some evidence of attraction to Sally…

For years you’ve been one of my primary “go-to” authors for funny traditional regencies. The blurb for this sounded good and I enjoyed the excerpt but unfortunately, I found the book as a whole was not what I was expecting.

The opening scenes of the story when Sally and her family meet Derwent’s guardian are classic “Joan Smith” funny. I was loving the contest of wits and intelligence between Sally and Monstuart. It’s like watching two duelists pull out their weapons, assume a stance and then cross swords. It’s also obvious from early on that both highly anticipate their meetings and feel a lot more for the other than they’re willing to admit – just yet. The scene in which Sally leaves Monstuart literally holding the fish for dinner was hilarious as well.

Their relationship is in startling contrast to that of Mellie and Derwent which is insipid – like a beautifully prepared gourmet meal compared to bland pap. But Mellie and her love are just right for each other exactly as Sally and Monstuart are perfectly paired. Mixing the lovers would be like serving fish taco ice cream.

Then Derwent and Mellie marry – at Sally’s urging because she’s the one they all turn to in order to make their decisions for them – everyone heads to London and the story starts to skitter sideways.

I know Sally’s not supposed to be able to see that Monstuart is in love with her but darn it! I need to see it a bit more clearly than I do here. This section of the book makes for dismaying reading. The fun was gone from Sally and Monstuart’s encounters and there was precious little else to take its place.

Mellie and Derwent are two lovely mooncalves in love who really do need keepers but they also have a tendency to sulk and whine a good deal. They both look to Sally for help with decisions then pout and take verbal slings at her, as does her own scatterbrained mother, when things don’t go perfectly. The tone of this part definitely veers close to mean-spirited at times.

Honestly I finished the book hoping that Sally and Monstuart will have as little as possible to do with those ingrates. The marriage proposal scene takes the feel of the story back to the funny start and watching Sally and Monstuart snark and snarl their way into an engagement salvaged the book a little but not by much. C

→ Jayne
Previous article: REVIEW: Heartsick by Caitlin Sinead
Next Post: On the Interchangeability of Books