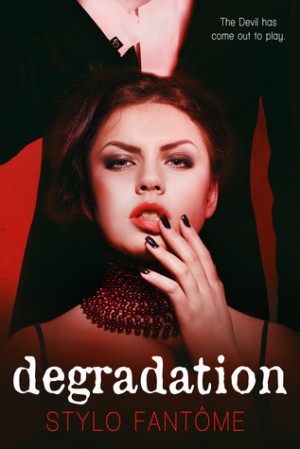 I bought the first book priced at 99c upon a recommended post at The Rock Stars of Romance.  The blurb intrigued me and the sample had me hooked. For readers, they should know that they’ll have to read and buy all three novels in the Kane Trilogy to get their HEA. Degradation ends on a big cliffhanger.

The story opens with eighteen year old, Harvard bound Tate dropping off things for her sister who lived with Jameson Kane. Tate and her sister never got along. Tate was jealous of Ellie’s success and her parents’ overt favoritism toward Ellie. Tate ends up drinking champagne and chatting with Jameson who reveals that he plans to break up with Ellie anyway. Through a series of small incidents, Jameson and Tate end up having sex that night while Ellie is away. It changes everything for both of them.

Tate becomes estranged from her family. Cut off from the family money, Tate finds her own way. She becomes sexually adventurous, almost as if the sex she had with Jameson unlocked some heretofore hidden well of curiosity. Tate not only has sex with multiple partners, she enjoys it but she still seeks out that emotional high that she had when she had sex with Jameson.

Jameson, too, was learning about himself and what he wanted seven years ago. He learned he didn’t want to be tied down, have a wife, and that he had rather perverse tastes in sex. Conveniently Tate and Jameson are two sides of the same coin. They both enjoy challenging each other and Tate enjoys being conquered and Jameson enjoys doing the conquering. They agree to a relationship of sorts where they continue to play their games but that his ex girlfriend is off limits and her friend, Angier, is off limits. Everyone else is fair game.

Tate intuits that Jameson does not really care to share her with anyone whereas she doesn’t mind (and is in fact turned on by his adventures with other random women so long as he explains those encounters in great detail). This part of their relationship was interesting because it evolved over time. Initially, when it was fun and Tate still trusted Jameson, these random encounters were exciting. Jameson even admits that he sought out these randoms for the sole purpose of being able to retell them to Tate later whereas he felt (and he was right) that Tate’s encounters with other men were about forgetting Jameson.

Their play, however, seems to be all about how much emotional pain Tate can handle. She tells him outright that it’s one thing to call her a dumb cunt when they’re having sex because she believes that he says those things to turn her on. It hurts, however, when she comes to the belief that he actually believes that. As the story unspools, Jameson keeps testing Tate and eventually takes it too far.

I liked Tate quite a bit and I feel that she carries the story. I wasn’t sure about the character she turned into in books 2 and 3 but given the trauma she suffers, it seemed consistent that she wasn’t the same person after the trauma as she was before. I wished she spent less time trying to seek her strength by relying on the men in her life, whether it was Jameson, Angier, or others. She came off as such a strong and vibrant character in the first book and became lost and uncertain for most of books two and three.

Jameson isn’t very likable and I think it’s interesting that he doesn’t have to be. He gives Tate what she wants and it is primarily through her eyes that he is magnetic and interesting. Otherwise, he’s a sociopath with few social skills who hates all people. He doesn’t have a reason for hating people; he just does. Most of his actions toward Tate can be read as mean and they are only softened when we understand that this is what Tate wants.

I thought the consent issue was well done in that I believed that Tate wanted to be treated this way and got off on it. She pushes Jameson hard (although not as hard as he pushes her).

Degradation ends on a big cliffhanger and the following two books–Reparation and Separation–are all about Jameson coming to grips with his feelings for Tate and earning her trust back. The second two stories lacked the emotional punch of the first one but as a reader, I had to know what happened.

I don’t think this is a feel good romance story but it’s compelling and for those who like the dark romances but are tired of the sexual slavery, this would be a good alternative. I have a hard time rating this book. Some of the content didn’t sit well (but I think that was the point) but it was well written and compelling so…B-?