REVIEW: Way of the Shadows by Cynthia Eden

One of your biggest fans is Mistress M from SM Book Obsessions. The other day when I was nosing around for a book to read, instead of diving into my one thousand plus to be read pile (this may or may not be an exaggeration), I was trawling the net for a new read. Melissa suggested Way of the Shadows. This book is #8 in the Shadow Agents series but I was assured I wouldn’t need to read any of the previous books in order to embark on the journey with Noelle Evers and Thomas Anthony. For the most part, I think that was accurate. 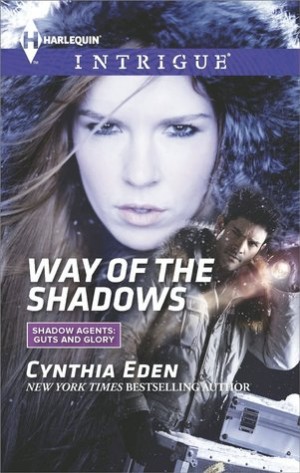 Noelle Evers was kidnapped as a seventeen year old. She was found forty-eight hours later, beaten and bruised with her abductor dead at her feet. She remembers nothing about the how she came to be abducted, who took her and why there was a dead man in the cabin with her. Noelle grew up and became a criminal profiler for the FBI. Bryan Mercer, the head of a special agent task force, acquires her services on a new mission.

He sends Noelle and EOD agent Thomas Anthony to Alasksa to see Senator Lawrence Duncan who Mercer believes was behind the bombing of an EOD office in Washington, D.C. Noelle and Thomas have an uneasy attraction to each other that they don’t even try to repress when bad things start to happen around them.

A stay in a small cabin and an abduction of a local girl triggers Noelle’s memory loss and flashbacks of the past start to come back to her. Thomas fears Noelle’s flashbacks because the darkest time in her life contains an encounter with Thomas.

There’s a lot of action in the book. In fact, there are so many plot twists and action scenes, it felt a tad over the top but it does keep the storyline moving. A lot of the falling in love parts happen in Noelle and Thomas headspace rather than in interaction and dialogue between the characters. Further, as a reader, we are asked to rely upon pre book feelings to serve as the foundation for the romance. We know that Thomas wants Noelle. Noelle feels an attraction to Thomas and that’s all the story essentially provides in terms of the reasons that Noelle and Thomas fall in love. Yes, Noelle is strong and smart and Thomas is devoted and capable but the way in which they go from partners to lovers was quick and without much discussion.

Thomas has watched over Noelle for fifteen years. Between assignments, he checks up on Noelle–unbeknownst to her. The emotional conflict that arises between the two passes quickly even though it could have served as a larger impediment. Thomas has a number of secrets and Noelle’s ability to forgive and move on is remarkable. After their first lovemaking session, I wouldn’t have minded if Noelle was a little angrier at what she learns post coitus.

Despite both of their bad pasts, Noelle and Thomas are protrayed as skilled at their jobs. Thomas is a believable killer and rescuer and Noelle is good at putting together pieces of evidence into a meaningful pattern. While Noelle is rescued more than once by Thomas, she is capable with a gun and recognizes her strengths and limitations.

If a reader is looking for the possessive and dedicated hero, Thomas fits the bill and he does so without being overbearing or manipulative. He was devoted to Noelle for years and his path always came back to her which is quite romantic. I liked that Noelle was depicted as capable and not crippled by her past.

Way of the Shadows is face paced, steamy with likable leads. I’d definitely read another in this series but I’d hope the books go on sale at some point. B-