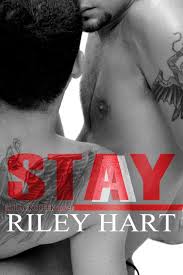 Wes Jensen just lost the sister who raised him, and gained custody of his niece. The last thing he needs to add to his full plate is dealing with Braden Roth, the one-night-stand who continues to try to push his way into Wes’s life. He has a kid to raise now, and Wes isn’t great at getting close anyway.

Braden has never had a woman or a man sneak out on him the morning after. From the start, Wes intrigues him, and Braden isn’t one to deny himself something he wants. And he wants Wes. The more time he spends with Wes and the little girl who constantly keeps them on their toes, the more Braden realizes this isn’t just about getting the guy who walked away.

As their lives intertwine more and more, Wes discovers Braden isn’t as shallow as he thought. But after everything Wes lost in his life, he isn’t sure he can risk his heart, and truly want Braden to stay—and if he did, would Wes’s quiet life be enough for Braden?

I almost gave up trying to find new to me authors on Amazon bestseller lists, because most of the time I was not happy with the books I chose. However when I saw your book was at #1, I remembered that some of my m/m book friends really liked your stories, so I kept my fingers crossed and dived in. Apparently this is a second book in your Blackcreek series, but the first book seemed to be about a different couple – who plays friends and confidants roles in this one, so I think the reader can easily read this book first without being confused.

This is a character based story – there is really not much happening plot- wise. Wes moved back home to take care of his older sister who was dying and she wanted him to have custody of her four year old daughter Jessie. Not long before his sister died he needed a break and ended up having a one night stand with Braden. Wes sneaked out on him in the morning and nobody had sneaked out on Braden before, so he was intrigued and wanted to know more about Wes and be his friend. When Braden appeared at the funeral to offer support to Wes, I was annoyed at Braden, because he felt like a selfish prick to me.

I saw very fast though that Braden really was not shallow. He just went for what he wanted as he had done all his life and this time he wanted Wes, because he was intrigued by him. Braden however was also a nice guy whose offer of friendship was sincere and he really did help Wes a lot with taking care of Jessie. Wes loved Jessie with all his heart and wanted to do right by her, but he had never taken care of a child on a permanent basis before, so once a week babysitting help from Braden came in handy.

“He had this need to do something important by Wes. Not that he was selfless or anything, because just as much as those other things, he just plain wanted Wes.

There was more to it even than that, though. He didn’t want Wes to be alone.

The man would never ask for help, wouldn’t ask for someone to be there, but Braden wanted to make sure Wes knew he would be. He hated to think about anyone feeling completely alone in the world, but…fuck, it gutted him to think of Wes feeling that way. ”

Wes’ main character flaw was pushing away people he loved, because he was afraid that otherwise he would lose them all.

“Everyone who knew him understood how hard it was for him to talk about things that really mattered. If he didn’t say them, he could pretend they weren’t true. Not feeling made it a whole lot easier when he lost them, and Wes always lost people that mattered to him”.

I will admit that while I understand how this flaw is a good one to have for romantic hero (this weakens his ability to form a relationship, but surely does not make him any less a romantic hero, does not make him a bad person, etc), every time I encounter the hero like Wes in romance I wonder whether a real person would operate like that, but that’s because it just feels counter-intuitive to me. However the writing was engaging enough to make me almost buy how Wes dealt with his insecurities.

I thought this was actually very nicely done – how sexual attraction slowly transformed into them wanting to be part of each other’s lives and learning that they wanted to be together. Of course Wes’ character flaw did not go away and that transformed into mandatory romantic separation. I actually was not completely happy with how it was done, simply because while yes, it happened because of Wes’ insecurities and worries and his habits of pushing away people who love him, at the same time to me it kind of kicked Wes’ back to the beginning of the story. I just thought he grew as a character and the stupid quarrel made me doubt that. On the other hand they fixed it fast enough, I liked that part.

Jessie played an important part in the story, and I liked her well enough, she did not annoy me, but I am not sure if she was a fully fleshed out character. I am leaning towards thinking of her as catalyst in bringing the guys together, and I am not sure if it is enough for me, but on the other hand she is four (almost five) years old, so maybe her age would not allow her to be more complex character just yet.

Brad’s loud family was a pleasure to be around, and Wes’ sisters were nice too (both the dead and alive ones, in fact the dead one felt way too saintly), but once again I thought they were not really the characters in their own right, they were just there to showcase the guys.

P.S. A couple of weeks after finished this review I feel a need to come back and add a P.S., just to note that the book now is pretty much a blur in my memory. Unfortunately it turned out to be a forgettable read.