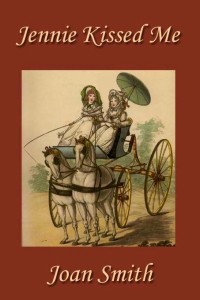 When Jennie Robsjohn inherited ten thousand pounds, she left teaching in Bath for London’s glories, with her companion Mrs. Irvine. En route she castigated a gentleman who had a beautiful companion young enough to be his daughter—which she was. Eventually Lord Marndale found Jennie’s influence over his wayward daughter to be remarkable. Jennie couldn’t decide if he wanted her as Victoria’s companion—or something more.

I have an abundance of your books on my TBR heaps and decided on this one based on the “excellent” notation for it at The Good Ton website – now saved via the wayback site. Well, to be honest, to me parts of it were indeed excellent while others sort of bogged down – no pun intended.

The story gets off to a great start with no nonsense former schoolteacher Jennie and her friend, naval widow Mrs. Irvine, off to London where Jennie hopes her small inheritance will snag her at least a baronet. A misunderstanding leads to a hilarious farce during which Jennie shows the stern stuff of which she’s made. I loved it when she smartly put Marndale in his place and gained his awed appreciation.

A trip to his country estate later and Jennie has shown why she was such a treasured teacher in her light handling of Marndale’s daughter Victoria’s rebelliousness. I was charmed by their growing relationship as much as I enjoyed watching Marndale fall under Jennie’s spell. Mrs. Irvine’s outspokenness was as much fun to read about though she ultimately turned out to be sort of a one note tune.

Usually I don’t mind a first person POV and in some cases I positively enjoy it but here I felt a bit lost as to what our hero, Marndale was up to. He seemed to be highly interested in Jennie as a romantic interest and not merely as a companion for his almost adult daughter but there was just enough to leave Jennie guessing and that left me uneasy. Was that his goal? Or did he want more? Given that I wasn’t >I> quite sure, Jennie’s matrimonial net casting and hinting got a touch embarrassing for her towards the end of the book.

Since Jennie had to be kept in the dark as to exactly what Marndale’s intentions were, some red herrings and Big Mis’s had to be manufactured. Two of them did take until the end to resolve themselves as interested in each other which was fine and sort of fun to watch but one event just dragged. Yes, I mean the much vaunted excursion into the “wilderness” that Jennie proposes and Victoria gets her heart set on. Tramp, tramp, tramp through the bogs and forest for a day of basically nothing but everyone being miserable. I didn’t feel that it advanced the plot at all as much as it served as a means to pad the book.

Once the plot moved beyond this, it picked up again as explanations for actions were supplied, relationships were elucidated and things became clear again. Still, there was a bit of time wasted until the lovely proposal scene – or perhaps I should call it the “we’re all on one page and crystal clear about our intentions and those are matrimony” as no question was ever asked and answered. Once Marndale had brought Jennie to a boil with his kisses though, it was fairly obvious to all what was going to happen. /wink.

So what started off as an excellent and funny book unfortunately, for me, got slowed down to a slogging middle before ending with a bang. All’s well at the end but I can’t count this effort as one of your books that I will revisit any time soon. C+