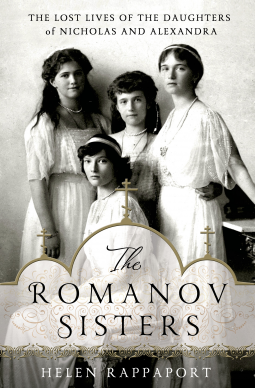 They were the Princess Dianas of their day—perhaps the most photographed and talked about young royals of the early twentieth century. The four captivating Russian Grand Duchesses—Olga, Tatiana, Maria and Anastasia Romanov—were much admired for their happy dispositions, their looks, the clothes they wore and their privileged lifestyle.

Over the years, the story of the four Romanov sisters and their tragic end in a basement at Ekaterinburg in 1918 has clouded our view of them, leading to a mass of sentimental and idealized hagiography. With this treasure trove of diaries and letters from the grand duchesses to their friends and family, we learn that they were intelligent, sensitive and perceptive witnesses to the dark turmoil within their immediate family and the ominous approach of the Russian Revolution, the nightmare that would sweep their world away, and them along with it.

The Romanov Sisters sets out to capture the joy as well as the insecurities and poignancy of those young lives against the backdrop of the dying days of late Imperial Russia, World War I and the Russian Revolution. Rappaport aims to present a new and challenging take on the story, drawing extensively on previously unseen or unpublished letters, diaries and archival sources, as well as private collections. It is a book that will surprise people, even aficionados.

My introduction to the Romanovs began many years ago when I read Robert K Massie’s “Nicholas and Alexandra.’ While it’s a very good book for its time, one glaring defect for me was always the fact that the lives of the four Grand Duchesses were covered in only one chapter titled OTMA. The sisters themselves used the term but, as you mention in your book, it mainly served to turn them into an faceless mass, indistinguishable from each other. When I saw the title of your book I thought, ‘aha, now maybe I can learn more about each sister as an individual.”

From the opening, the book is so full of signs, SIGNS I tell you! of what was to lead to what was to come. Or what certainly helped grease things along. Reading it is like watching one of those old 1970s disaster films – Airport, The Towering Inferno, Earthquake or The Poseidon Adventure. We get the introduction of the cast of characters, the setting of the disaster and slow build up to The Event – whatever that might be, followed by the fallout from the catastrophe. Here it’s the Romanov family, in a Russia poised for social upheaval, which lead to the Revolution and then to their deaths.

Since we already know the family is doomed, it’s easy to pick out the people and events in their lives and the world stage that got them to Ekaterinburg. All of this must obviously be covered as it was such an integral part of what happened to the sisters but what about them before the end? What made them tick? How were they different? This is what I really wanted to know.

The book comes through for me. It’s obvious that considerable time and effort was expended in tracking down – and in many cases translating – original source material. Their parents wrote much about them in letters and diaries. Since the sisters were celebrities in their day there a plethora of foreign coverage of their lives. And as they were prodigious letter writers, their own experiences, thoughts and hopes were captured and preserved in the moment, much like objects in amber.

Far from being the stairstep princesses in often matching tulle covered picture hats of the day, the sisters were vastly different young women. Sometimes solemn, serene, imperial, impish, boy crazy or downright mean, the girls were individuals from the beginning and just starting to show the women they could have become given different circumstances. I was surprised at how extremely naïve they were but given the degree to which their parents sheltered them, and how they still called them “girlies” until Olga was near twenty, I suppose I shouldn’t be.

One thing that does come through, crystal clear, is their devotion to each other, to their parents and to their brother who, unfortunately, due to the Russian peoples’ and his parent’s hopes for an heir, seemed to push the four sisters into the background and blur their individual personalities.

Reasons are given for not including information about the actual execution and the disposal of the bodies. I realize that you’d already covered it in another book but by merely mentioning that it makes it seem as if you’re trying to sell the reader that book to get the complete story.

I did enjoy getting to know Olga, Tatiana, Maria and Anastasia much better than I did when I began the book. Each sister is now a bit clearer and more fixed in my mind. Yes, I know that if they had lived, they would probably have been relegated to nothing more than footnotes of the era (after all, who remembers much of Princess Marie-Thérèse Charlotte of France?) but since that isn’t what happened and many still want to know more about them, this is a good starting point to do so. B