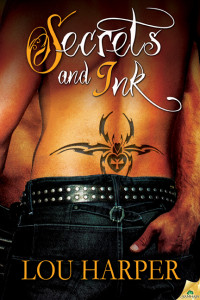 When Karma writes you a ticket, pay up or else…

If life was like the movies, Jem Mitchell’s wouldn’t be such a mess. In LA’s glittering world of dreams, he works an unglamorous job at a gourmet grocery store. His past is so deep and dark, the details are lost even to him. All he knows is he was once cursed by a meter maid, and ever since, his love life has sucked.

When Detective Nick Davies becomes a regular at the store, Jem dares to hope he’s un-hexed at last. He should have known that sex with a remarkably normal guy, devoid of weird fetishes and fatal personality flaws, was too good to be true.

During a post-encounter cuddle, Nick recognizes the tattoo on Jem’s back—and remembers him as a young hustler he arrested nine years past.

As Jem’s memories come crashing back, he flees from Nick, but fate contrives to keep pushing them back together. And when Jem’s old partner in crime is found murdered, the stakes are raised for life, for love, and a dangerous drama with no guarantee of a Hollywood ending.

Warning: Stars a mild-mannered store clerk with a shady past, a hunky cop whose passion in the bedroom is as big as his passion for justice, and celebrity sightings you won’t see on TMZ.

Dear Lou Harper,
On the surface, I could not think of anything obviously wrong with this story. The narrator Jem is likeable and funny. He has his own quirks and neurosis and the reasons are all based on what happened to him in the past. He thinks he is cursed – truly when I was reading the blurb I was sure that the magic would be involved in the story. However, it is very clear (to any person on Earth but Jem) that he has just been having lots and lots of bad luck in the last several years of his life.

“You should have patience with Jem,” she said, leaning close to Nick. “He thinks he’s been cursed.” “Yeah, I’ve heard,” Nick replied. I shook my head at her disapprovingly. “I don’t think that. I know it. Ms. Jones said, word for word: Sir, may all your hubris fall around your ears like a ton of bricks. Three days later, a literal ton of bricks fell on me. Well, okay, technically, it was poured concrete, but that’s a tiny detail. I’ve had nothing but bad luck since.” Like my sister, Nick was a doubter. “Don’t be ridiculous. Life’s not a fairy tale.” “Don’t I know it? But the curse is real. I saw a psychic, and she categorically declared I was under a curse. Don’t give me that look,” I added, because Nick was rolling his eyes now. “Madame Layla is for real. She is also a witch, so she knows her stuff.”

When Jem and Nick met, I felt the connection between them and I wanted to see and feel more of that. I was not sure whether I liked that they had already met in the past, when Nick arrested Jem during his hustling activities, but I was ready to go along with it – especially since the reasons for Jem being a teenage prostitute were on one hand different from what many m/m stories usually go with and on the other hand so simple and believable to me.
I also really enjoyed the mystery part of the story – the first part of the mystery that is, although it started very strong, it then fizzled out really quickly, because the identity of the villain was telegraphed pretty obviously. I mean, I do not mind if mystery is just a vehicle for romance OR if the romance takes a very secondary fiddle to the mystery, but to me neither the romance nor mystery in this book received an in depth treatment. The mystery was simplistic, because there was no candidate to divert my suspicions from the one character who felt like a REALLY bad and sleazy guy from the very beginning. I get that there was an attempt to do so with somebody else, but I just did not buy that at all.
The romance was cute. But I wanted to know more about both guys as people. As I said before, I thought Jem’s neurosis was established well by what happened to him in the past, but at the same time I thought the medical part of his situation was given a superficial treatment. I get that it is hard to strike a balance in romance, but I did not feel like the balance was achieved. Nick was nice and dependable and a stickler for the rules, but I did not feel like I got to know him well if at all. I felt that characterization-wise the story was just scratching the surface, especially with Nick, and it was frustrating for me to feel dissatisfied with the characters when I finished reading.
I liked it but did not love it.
Grade C.