You are one of my go to authors in contemporary romance. I feel safe in one of your books. I’m not going to find assholes or cheating or anyone getting their heads cut off. The most unexpected thing I can expect in a Kowalski book is how badly an ATV will be mangled. In fact, maybe that should be the new rating I give to Stacey books. This one was a five ATVs but the other one was only worth three ATVs. 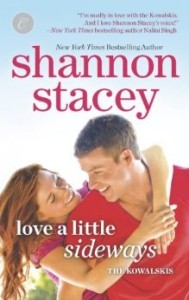 Liz is the only sister of the big Kowalski family and she’s spent most of her adult life supporting an artist in New Mexico and she rarely saw her family. When she decides that the long term relationship is going nowhere, Liz heads home to Maine. There she starts a waitressing job and begins to consider what she really wants to do in her life.

One thing she’d like to do is Drew Miller, the Police Chief and best friend of her older brother. They had a one night stand (or one late afternoon stand) during the wedding reception of one of Liz’s brothers but they’ve kept it a secret because of Drew’s relationship with Mitch, the eldest Kowalski.

When Liz is back in Maine, their attraction to each other is hard to resist but there are two major impediments to any relationship. Drew is concerned about telling Mitch that he, Drew, is having sex with Mitch’s sister but the more pressing concern is the major difference between Drew and Liz’s outlook for the future.

Drew spent years married to a woman who never wanted to have children but never admitted it to Drew. This wasn’t something he knew and ultimately that led to a divorce. He is actively looking for a wife and one who wants to have kids. While Liz wants kids and a family possibly that is in the far future. Right now she wants to look at classes at a community college and even get a degree. She doesn’t want to wait tables for the rest of her life and is feeling a bit self conscious of how she compares professionally with her brothers.

Drew and Liz presented an impossible conflict. He wants to get married and have children and she does not. The entire Kowalski clan is brought back together for a camping trip where Drew and Liz’s first conflict – Mitch – comes to a head but their other conflict isn’t so easily resolved. Liz is still living in a rented house and with inflatable chairs and sofa. Her worldly belongings could fit into the back of a car. Nothing about her lifestyle indicates that she is ready to settle down.

Both characters are extremely likeable and I enjoyed revisiting all the other Kowalskis but I did wonder if the vast cast of characters would be confusing to readers. And while I felt that there was great chemistry between Liz and Drew, the impossible conflict had to end in either Drew giving up his dream of the future or Liz sacrificing for Drew. That wasn’t how the story was brought to a close but I had a bit of a hard time believing that the two were going to have a happy ever after. Instead I felt that neither character had really moved far enough in the other’s direction for a completely satisfactory conclusion. B- or 4 ATVs.

→ Jane
Previous article: REVIEW: At Any Price by Brenna Aubrey
Next Post: Isn’t It Romantic?