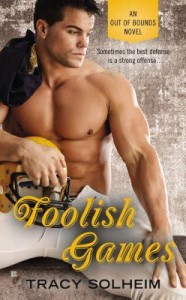 Julianne Marchione is a famous bridal gown designer who has a one night stand which results in a surprise pregnancy. Determined to raise the child on her own, she never reconnects with Will Connelly, a pro football player. When her baby  has a life threatening illness requiring a blood transfusion, however, she is compelled to seek Will out.

A bastard himself, Will is furious at Julianne and demands that he not only marry her but that he be given his rightful place as Owen’s father. Julianne agrees because this is the only way she will save her son but refuses to be anything but an in-name only wife. Will and Julianne’s relationship starts off on a bad note and initially does not get better.

Will is initially very cold to Julianne and given that she was going to keep his son from him that was probably deserved.  As the two spend time together in Will’s hometown, a place that he kind of loathes because of how he and his mother were treated when she was a poor young single parent, Will begins to thaw as he begins to see how great of a mother Julianne is to Owen.

Julianne is a … frustrating character at times. Her initial plans to raise her son on her own were somewhat understandable but then she sells her successful bridal business to pay Owen’s medical bills even after Will agreed to cover them (and likely Will’s insurance could help in that regard).  She meekly agrees to Will’s marriage plans because she has no financial resources to fight him BUT her brother is a wealthy senator. It seems like she had other options but I understand she couldn’t choose those because otherwise how would we get Will and Julianne in a house together?

Notwithstanding the setup, I did enjoy the progression of the romance which largely centers around their unabated attraction for each other and their love for Owen. Both are impressed with the other’s devotion to their son and it is really the newborn that brings them together.  I was convinced that they were a good match. Will needed someone like Julianne who was more expressive with her feelings, more willing to take an emotional chance.

Will and Julianne’s burgeoning romance is imperiled by a bounty scandal that involves his former college coach at Yale and now defensive coordinator the NFL. Will would never turn on his former coach because without the coach’s championing, Will would not be in the NFL at all.

As the two fall for each other conflicts arise in the form of Julianne refusing to share the details of a new business with Will and Will’s scandal but there was a point in the book where I wanted to reach through the book and slap Julianne silly for something that she does to Will.  I know it was inadvertent but her lack of discretion as it related to private, secret things that Will told her was infuriating.

As for the secondary characters, I loved Will’s mother and the relationship that the two had. They were devoted to seeing that the other was happy and the tough times that they’d had together only made them a stronger, tighter unit.  But Julianne’s family was frustrating. Perhaps it was to show us that the rich don’t have better families than the poor, but the use of Julianne’s brother both as a villain and a hero came off as contrived and inconsistent. Of all the actors in the story, he was the least believable and the most flat.

I think readers of sports fans would like this book but Julianne’s behavior in the beginning and the end could have cratered the book if not for the positive ending brought about by other characters. Overall though I liked the blend of sports, the relationship between Will and his mother, and the romance between Julianna and Will. B-