I bought this book because it was recommended in an online forum I belong to.  Lexi LaCroix is a former model turned couture wedding dress designer. Her clients are so famous that they require background checks of the designer forcing Lexi to live a sedate and scandal free life. She’s ready to take the next step in her career by partnering with a larger clothing manufacturing company who would mass produce a line of Lexi’s bridal designs. Her potential partnership is threatened by word that Lexi was at a sex club. Lexi had gone to this club, but for nothing more than observation but the warning hits home. 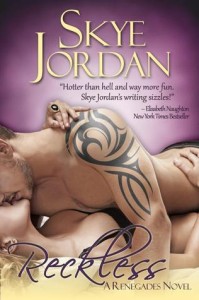 Jax’s problem is that by leaving acting to do stunts, he’s got conflict with his family. Further, he’s tired of being used by all the hot women he is dating.They sleep with him and then try to leverage that relationship into an advantage for his career. Jax is told by his best friend that Jax needs an attitude adjustment. He needs to stop looking for the hot women and looking for nice, caring ones instead. That’s pretty good advice. Does Jax take this advice?

Not really because shortly after engaging in anonymous cell phone chatting, he’s quickly arranging his plans in NYC to accommodate a one night stand. The one night turns into more nights, of course, or there wouldn’t be a romance.  The attraction and romance rests primarily on the physical lusts of the characters. After all, during their first encounter, they barely know what each other looks like with Lexi demanding that Jax make love to her in the dark.  Lexi is afraid that her one night stand might be harmful to her business.

The conflicts that keep Lexi and Jax apart are difficult to swallow. Lexi’s career requires so much discretion that she can’t be involved with a former actor, scion of Hollywood, and now stuntman?  Jax shows almost no character growth through the story given that while he was supposed to search out different women and make different choices, he was never actually forced to do so. His petulance at being shoved to the side was also confounding. He reeked of the poor little rich boy syndrome who made problems where there were none.

It’s probably a good thing that the pseudonym was adopted for Joan Swan because I had such a negative reaction to the portrayal of racist language used in Fever, I probably wouldn’t have picked it up. This book falls into the category realm for me and while it was a nice diversion, the failure of Jax to actually grow as a character was about as disappointing as was the lack of development of the romance.  The story had a lot of lustful scenes which were well done and I liked Lexi quite a bit. She was determined to make her own way and she did, without the help of Jax, her best friend, or anyone else. She pursued her own vision and achieved success on her own.  Lexi is what made the story work for me and if she wanted pouty Jax, then I guess I’m glad she ended up with him.  C

→ Jane
Previous article: REVIEW: Relativity by Cristin Bishara
Next Post: Daily Deals: Seamstresses, both modern and historical with a confectionaire thrown in