Kaetrin: I haven’t read everything in your backlist, but I have read quite a bit of it and it is usually successful for me.  So I was keen to read your newest release Fall Hard (which title my brain kept insisting on reversing).

Willaful: Merrow’s name is one of the few that would get me to pick up a book with the word “Viking” associated with it! My experiences with romance Vikings have not been good ones. 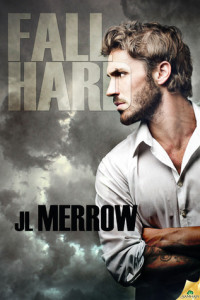 told from the first person POV of Dr. Paul Ansell, a historian who teaches at the Snorri Sturlusen Institute of Icelandic Studies.  A year prior to when the story starts, Paul was involved in an accident in which his lover Sven (who was American and not Icelandic despite the name) died and he was seriously injured.  Paul has been recuperating with his sister in Britain and returns to Iceland to take up his teaching post again, continue his research in to Egil Skallagrimsson (a hero/villain from an ancient saga) and to find answers about the accident he can’t remember.  All of his previous time in Iceland has been forgotten as a result of retrograde amnesia resulting from the accident.  In Iceland, he meets up with a local man, Viggo Gudrunarsson, a man he has clearly known before and they quickly embark upon a fairly whirlwind romantic relationship.

Willaful: First off, I was impressed with how setting is used in this book. Iceland is not only depicted with loving care, but its culture and history are absolutely essential to the plot.

Merrow cleverly uses Paul’s amnesia as an effective way of getting in local color without sounding like a guidebook. He’s relearning and re-experiencing everything, so it’s natural for him think about or comment on it. Like the dark lava bread:

“The sweet flavour and cakey texture of the bread tantalised me with almost-memories: I’d eaten this fresh-baked, not from a supermarket, I was certain, and it had been much better.”

Bread is such an meaningful cultural reference because pretty much every nation has their own distinct version; my nephew still brings us back pan hallulla when he visits Chile.  Knowing what their bread is like makes the place come alive for me.  Throughout the book, I really felt the appeal of Iceland, which is far more than just hot Vikings.

Kaetrin:  I loved the Icelandic setting.  I found myself stopping to Google various places and landmarks.  It almost felt like Iceland, or at least Reykjavik and surrounds were a character in the book.  There was such a strong sense of place.   I think it added to the mystery aspect of the story too (especially with the barren lava field landscape which is a large part of the country)  – Paul was discovering Iceland again and the reader was taken on the journey into the unknown.  My sense was that a lot of research into Iceland and the sagas had been done because it felt authentic and seamless in the book, with no large info-dumps or travelogues. Because it is told in the first person and because Paul has forgotten Iceland and the people he knew there, the reader discovers everything as he does.  He is naturally suspicious – almost everyone knows more about him than he does and he is sure there are things people are not telling him.

Willaful: I also enjoyed many aspects of Paul’s character. He’s a serious scholar, very atypical for a romance hero. He has significant relationships with women. Being gay is integral to his life — and how cool to read about Pride in Iceland! — but his life isn’t all about being gay.

Except that it’s obviously an m/m romance, I found the book hard to categorize, with its strong mystery element. Would you call it a Gothic romance? The overall tone with Paul’s confusion and uncertainty has a very gothic feel to me. In fact, Paul’s role in the story, and both the beginning and the ending, strongly evoke classic Hitchcock films.

Kaetrin:  I haven’t read much Gothic romance so I’m not sure I know enough about it to make any comment on that.  But I’d say it was definitely more of a mystery/romance rather than a romantic suspense.  There was a strong moodiness to the text which fit the mystery theme really well and the first person narrative only added to that. And I agree with you that there was a Hitchcockian (Hitchcockeseque?) feel to the story.

Willaful:  Let’s go with Hitchcockesque, just because it looks so filthy! On reflection, I think I’d call the book a psychological thriller, except the romantic element is much greater than you’d expect, and the thrilling element weaker. I didn’t find it entirely successful in any of the genres, though.

Kaetrin:  I enjoyed the romance and I liked the mystery up until the big reveal where things felt a little underdeveloped for me.  What happened “before” remained a little too vague and unformed, even by the end. I still had some questions about what Viggo and Paul had been to each other and I felt the explanation for Viggo’s tattoos suggested something other than what was actually the case. (May I also add that Viggo’s Yggdrasil (tree of life) tattoo sounded like it was particularly painful to get, the taproot ending where it did.  Ouchie.)

I found Sven difficult to know, which was both good and bad.  Good, because it meant that I had no investment in Paul’s relationship with him and therefore no trouble buying into the romance between Viggo and Paul. But bad, because the big reveal at the end was kind of a letdown for me – the set up led me toward something more exotic perhaps.  But then, I’m usually pretty bad at mysteries.

Willaful:  I agree that after so much suspense, the ending was a little tame. I was puzzled by what’s going on the secondary characters, Mags and Alex. There seemed to be many signs that Mags was interested in Alex — blushing and so on — yet later she encourages Paul to be with him.

Kaetrin: I took it to be a way of the author keeping things mysterious. Most of the characters were suspicious in some ways.  I think that’s part of the reason why the big reveal didn’t work super well for me – I wondered why the other characters had acted oddly.

Willaful: Yes, exactly. There are many threads that were intended to create suspicion and are simply never explained.

I’m afraid the mysterious elements badly backfired with me: the first time I read the book, I was so mistrustful of everyone, I couldn’t relax into the romance or get attached to any particular relationship, because I had no idea how it would turn out. Basically, it worked too well as a thriller for me to enjoy it as a romance. Everything seemed suspicious — Paul even started to wonder if his sister is hiding things from him. The atmosphere was so sinister, I kept waiting tensely for something awful to happen. And then the ending didn’t really justify all the tension.

On the second read, I was able to enjoy the romance and see how charming Viggo is, with his soulful music, crinkly eyes and “born to smile” face. He and Paul are from very different worlds in more ways than one, but they complement each other.

Kaetrin:  I didn’t have trouble with the mystery interfering with the romance – as I knew it was a romance, I trusted there would be a HEA and whatever resolution there was to the mystery aspects, it would not interfere with it. I did definitely feel the connection between Viggo and Paul and I believed in their happy ending – even if I would have liked a little more about what they planned for the future – was Paul going to stay in Iceland permanently?  (Not that I needed to know it for the story to be complete – I just wanted to).

Willaful:  It didn’t even occur to me to wonder about that. I guess the book ended on a note that made me feel confident they’d stay together. Although I would only have given it a C after my first read, the second one brought it up to a B.

Kaetrin:  I normally read for the romance but I found myself engaged by the mystery as well here; the book pulled me forward as I tried to puzzle it out. Like I said before, I’m really bad at mysteries so I didn’t work it out and unfortunately, the resolution did fall a little flat.  But despite some reservations about the early part of their relationship, the romance between Viggo and Paul did work for me and I was immersed right til the end.  I also appreciated the epilogue here which helped to round out the story and solidify the HEA.  I liked this one very much. I give it a B.