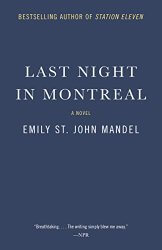 After reading the excellent Station Eleven, prompted by Janine’s review, I was very happy to see that your debut novel was being reissued and was available for review.

Like Station Eleven, Last Night in Montreal weaves back and forth in time, presenting the varying perspectives of interconnected characters. In the present day, Lilia is living with Eli, a frustrated graduate student unable to finish his dissertation, in Brooklyn. They share a fascination with languages (Eli’s area of study is dead languages) and Eli is obsessed with Lilia in spite of, or more likely because of the fact that she’s so elusive and emotionally unavailable. One day she leaves their apartment and disappears. Desperate to find her, Eli follows clues from a series of mysterious postcards he receives in the mail from Montreal.

Years earlier, Lilia is a small child living with her mother and half-brother in a small town north of the Canadian border. One snowy night, Lilia’s father lures her outside and makes off with her. In the ensuing chaos – police tramping through the house and asking questions – the reader gets the sense, from the half-brother Simon’s point-of-view, that all is not quite right in the household and that Lilia’s mother is not being entirely honest about circumstances leading up to Lilia’s disappearance.

Meanwhile, Lilia and her father spend the next nine years on the road, traveling from town to town, staying at motels and eating in diners. She has a fitful, informal education, heavy on languages and the arts, courtesy of her father. Lilia doesn’t appear unhappy or seem to miss her mother (she’s one of several characters whose third-person POV is represented). On the contrary, she takes to writing notes in the Gideon Bibles found in every motel room, notes that indicate that she doesn’t want to be found. She signs her name to these notes. Her father knows nothing about this and would be horrified if he did; they are at times barely one step ahead of the law as it is. Lilia has mysterious scars on her arms (which were fresh and bandaged when she was taken by her father), the origins of which she doesn’t recall; in fact, she doesn’t seem to recall her life before the abduction at all.

A few years after Lilia’s disappearance, a private investigator in Montreal, Christopher, is given the case by Lilia’s mother, with one important caveat: he’s not allowed to talk to Lilia’s brother. Christopher is in a failing marriage to Elaine, his childhood sweetheart (they grew up in a roaming circus together and only ever wanted to settle down somewhere and lead normal lives). Christopher finds evidence that Elaine is having an affair, but refuses to confront her about it, choosing instead to work long hours and bury himself in work. Elaine pretty much disappears too (eventually she takes off entirely, but even before that she’s barely present), and this leaves their only child, Michaela (who is the same age as Lilia) more or less on her own. Christopher eventually travels to America to follow Lilia’s trail; it’s supposed to be a short business trip but it extends for years instead, as he obsessively follows Lilia throughout the country. Meanwhile, Michaela is left to raise herself and indulge in her own obsession, tightrope walking without a net (she wanted to join the circus but her parents wouldn’t let her, though they did enroll her in acrobat lessons).

In the present day, Eli travels to Montreal in the depths of freezing winter, and meets Michaela, the source of the postcards. He wants to know where Lilia is (Michaela claims to have seen her recently); she wants him to tell her about an incident that Lilia won’t talk about, an accident that injured Michaela’s father years before (presumably when he was trailing Lilia and her father). Eli stays in Montreal for weeks, hanging out at the club where Michaela works (she’s a go-go dancer) and engaging in a standoff with her: neither will give the other the information each wants.

If I could think of one phrase to describe Last Night in Montreal, it would be: self-consciously literary. The writing is beautiful, but the somewhat dreamy style worked a lot better for me in Station Eleven than it did here. I think that’s partly because the events of Station Eleven are so catastrophic that a lyrical style worked; it leavened the grimness a bit. Whereas here, the characters are so mired in Deep Thoughts and Big Ideas and angst, I paradoxically ended up wondering about prosaic things like: did they ever watch television? Where did their money to live on come from?

Last Night in Montreal is full of recurrent themes: the story of Icarus, whose doomed flight fascinates both Lilia and Christopher; the meaning and purpose of travel (are you going to something or away from something?); the significance of language and the limitations it can impose (Lilia is fluent in a number of languages, whereas Eli’s and Michaela’s shared difficulty with French ends up being a hindrance in notoriously English-hostile Montreal). The theme that runs throughout the book (and which ended up giving me fits) is the twinning of Lilia and Michaela. The same age (Michaela notes at one point that she is two months older that Lilia), both are deeply wounded by the mistakes of their parents. Michaela is in some ways Lilia’s mirror opposite; where Lilia is the object of obsession (Eli’s, her parents’, Christopher’s), Michaela is the forgotten one, abandoned by her parents and of interest to Eli only because of what she can tell him about Lilia. Though I don’t believe Lilia had it any better being the pursued one rather than the ignored one, the dichotomy made me feel very much more for Michaela than for Lilia (or any of the other characters in the story, for that matter).

This is why I didn’t like Last Night in Montreal (and I didn’t like it, though it had qualities that I admired, chiefly the writing): there is no moral center, no real likeable characters, and most importantly, though I feel terribly conventional and bourgeois for even thinking in these terms, I felt bad for Michaela. To address the first issue: the novel doesn’t ever seem concerned with the rightness or wrongness of the characters’ actions, though I would say both sets of parents and, to a lesser extent, Lilia herself, are monstrously selfish in their actions and do a lot of damage. I found that I just wasn’t that comfortable with their being no moral POV, though I would not have said before that that’s something I require when I’m reading. I’m not talking about characters being punished or needing the author to be explicit about the wrongs that various characters do. I just wanted some acknowledgement of how utterly fucked-up these situations were. I don’t know if it’s a divide between the literary novel and the genre novel, where in the latter there’s a greater expectation of rules and, I don’t know, clarity? I don’t need a book to have the same moral POV as I do, necessarily, and I don’t like or want neat morality lessons with clear heroes and villains. But the lack of moral center, the lack of any particular POV on the characters and their actions, made it hard to relate to the story and characters.

The only character I felt any connection to was Michaela, because she was manifestly unhappy, which made her at least feel real. I would expect someone who had been through what she’d been through to be unhappy. Lilia spends the book as the obscure object of desire; for all that we get her POV fairly often, her feelings remain opaque. She seems to be made up of ennui, a restless desire to move on, and an interest in the arcane (words and architecture, chiefly). In short, she doesn’t ever come off much like a real woman. Eli is callow; that’s about it. Christopher is hard to understand, even though like Lilia we are given his POV on a number of occasions. I never got what was driving him in his search  for Lilia. The others – Lilia’s parents, Michaela’s mother – are never given POVs (at least not that I recall) and so there’s little opportunity to understand why they are so awful (and some might argue that Lilia’s father wasn’t awful but I believe he was, absent any real understanding of why he made the choices he made).

More than anything, Last Night in Montreal was simply a frustrating, unsatisfying read – it wasn’t just that I didn’t care about the characters; I didn’t understand them, and they never came alive for me. My final grade for this book is a C.