I first heard of Station Eleven, your post-apocalyptic literary novel, when my friend, author Meredith Duran, recommended it to me. I was a bit hesitant to read it — literary fiction can be emotionally hard on me — but it turned out that this novel, for all that it deals with loss, feels tender and hopeful. 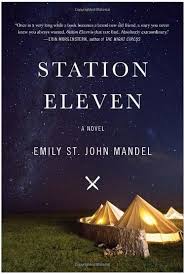 Station Eleven begins with Shakespeare, King Lear to be precise. A performance is staged at Toronto’s Elgin Theatre. Three little girls with non-speaking roles portray representations of Lear’s daughters in childhood. Arthur Leander, the actor playing Lear, collapses and has a heart attack on stage.

Jeevan Chaudhary, an audience member who once worked as paparazzo and entertainment journalist and is now training to be a paramedic, jumps onto the stage and administers CPR until medical assistance arrives. Jeevan once stalked Arthur as a paparazzo, once interviewed him as a journalist, and now wants to save his life, but is unable to do so. Arthur dies.

One of the child actresses, eight year old Kirsten Raymonde, witnesses Arthur’s death. Jeevan tries to comfort her until the show’s wrangler arrives to take her. Jeevan, whose girlfriend has long since left the theater, wanders outside in a snowstorm.

Members of the show’s cast gather at the bar in the lobby to discuss who should first be informed of the thrice-divorced Arthur’s passing. They settle on his lawyer. Then the second chapter ends this way:

In the lobby, the people gathered at the bar clinked their glasses together. “To Arthur,” they said. They drank for a few more minutes and then went their separate ways in the storm.

Of all of them at the bar that night, the bartender was the one who survived the longest. He died three weeks later on the road out of the city.

Jeevan has boarded a streetcar when the phone call from his friend Hua comes. Hua, a doctor, is calling to alert Jeevan to the arrival of a new and virulent epidemic known as the Georgia flu in Toronto.

A frantic Jeevan gets off the streetcar and shops for several shopping carts’ worth of groceries to stockpile while calling his girlfriend to warn her. Then he heads to his brother Frank’s apartment.

Sixty dollars later Jeevan was alone outside his brother’s apartment door, the carts lined up down the corridor. Perhaps, he thought, he should have called ahead from the grocery store. It was one a.m. on a Thursday night, the corridor all closed doors and silence.

“Jeevan,” Frank said, when he came to the door. “An unexpected pleasure.”

“I…” Jeevan didn’t know how to explain himself, so he stepped back and gestured weakly at the carts instead of speaking. Frank maneuvered his wheelchair forward and peered down the hall.

“I see you went shopping,” he said.

The novel then shifts to Arthur Leander’s lawyer, who calls Arthur’s closest friend, Clark Thompson, and asks him to deliver the news of Arthur’s death to Arthur’s ex-wives. Miranda, the first of these and a shipping company executive, is in Malaysia when she gets the call.

So this is how it ends, she thought, when the call was over, and she was soothed by the banality of it. You get a phone call in a foreign country, and just like that the man with whom you once thought you’d grow old has departed from this earth.

The conversation in Spanish went on in the nearby darkness. The ships still shone on the horizon; there was still no breeze. It was morning in New York City. She imagined Clark hanging up the receiver in his office in Manhattan. This was during the final month of the era when it was possible to press a series of buttons on a telephone and speak with someone on the far side of the earth.

When we reconnect with one of the characters, twenty years have passed. Kirsten Raymonde, the child actress in the King Lear production, is now twenty-eight and part of a troupe of actors and musicians known as the Traveling Symphony. The Symphony mostly sticks to familiar territory in the middle of what was once the U.S., along Lakes Michigan and Huron.

In this era, most “towns” are composed of a few families clustered together. So few people survived the Georgia Flu that the land through which the Symphony travels is mostly empty, though littered with the skeletons of rusted cars that aren’t operable any longer. Gasoline production has ceased.

The Symphony performs music and Shakespeare, which is what people hunger for most now. As they travel, they memorize their lines and carry knives, in case they meet with danger on the road.

But it is not on the road that the Symphony meets with danger, but in the small settlement of St. Deborah by the Water. Two years before, they left two members of their troupe in this “town” – Kirsten’s pregnant best friend Charlie and her partner Jeremy.

Not only are Charlie and Jeremy missing now, but the townspeople are oddly unfriendly, and a twelve year old girl follows Kirsten when she tries to find out what happened to Jeremy and Charlie. The midwife tells Kirsten that Charlie had a healthy baby girl before leaving a year before.

”Your friend rejected the prophet’s advances,” she whispered, close to Kirsten’s ear. “They had to leave town. Stop asking questions and tell your people to leave here as quickly as possible.”

After discovering graves for Charlie and Jeremy, The Symphony does just that. Believing the graves may be empty and that the town’s prophet and his followers could be in pursuit, they turn south. But no one knows what lies in that direction… the rumored Museum of Civilization, to which Charlie and Jeremy may have attempted to escape, or danger and possibly even death?

Station Eleven is large in scope yet comes across as intimate. It is narrated in omniscient voice and flows effortlessly back and forward in time, and back and forward again. The nonlinear structure illuminates what was lost with the arrival of the Georgia Flu—so many lives, and a way of life that seems as distant as a fairytale to those born later—as well as what has remained.

The book follows the lives of five major characters – Kirsten, Jeevan, Arthur, Miranda, and Arthur’s friend Clark. Not all of them survive, but each is depicted with clarity but also with a forgiving affection. Most are shown through a before-and-after lens that allows the novel to not only grieve for, but celebrate, what was best about their old world while marveling at the wonders of the new one.

The novel is concerned less with the physical struggle for survival, and more with the needs of the human spirit. The Traveling Symphony’s lead caravan is emblazoned with the line, taken from an old episode of Star Trek Voyager, “Because survival is insufficient.” That sentence is both a mission statement for the Symphony, and a theme in the novel. After survival has been achieved, what else might bloom if nurtured?

I’ve quoted liberally from the beginning of the book because I loved the writing, and didn’t know how else to do justice to the stark beauty of the sentences or to the novel’s unexpected suspensfulness. I also loved the characters – from Miranda, who, after her divorce from Arthur, finds two lines of work to satisfy her and feed her soul, to Jeevan and Clark who struggle for a similar kind of satisfaction.

From Kirsten, to whom the Symphony is now a family, and who collects articles about Arthur Leander, the last person from the time before whom she remembers, to Arthur himself, a Hollywood actor in the time before the virus, a man who leads a shallow life but discovers what is most important in his eleventh hour.

I have just two complaints about this book: that Arthur is initially harder to care about than the other characters, partly since he lived before the Georgia Flu swept across the world, and partly due to his personality, and that I experienced mild confusion about the timing of the publication of a book about Arthur. But later in the book, both of these issues resolve satisfactorily.

The novel leaves it to us to make up our minds about the characters’ choices, and never judges them for us. Since this is literary fiction (albeit with some genre elements), it’s best not to wait for all the threads to connect at once, or for a detailed description of the days when the survivors fought each other for resources.

Station Eleven takes its title from two graphic novels Arthur gave the child Kirsten which the adult Kirsten still carries with her. In those volumes, Station Eleven is a traveling space station, home to Dr. Eleven and to castaways from earth who live beneath bridged islands, in the Undersea. To Dr. Eleven and to the residents of the Undersea, the loss of earth is a tragedy, but it does not negate the beauty of their new surroundings.

Similarly, the novel Station Eleven explores not only loss and damage, but also what is best about humanity, what we have to look forward to so long as we remain. The gentle yet clear-eyed compassion of the novel’s voice infuses the book with a kind of tenderness. Even in the tough post-virus environment, there is still a love of music and story. There are still grace notes, there is still a need for connection, and there is still love. If, as in Shakespeare’s words, life is a brief candle, then it is one whose luminous beauty cannot be denied. A-/A.