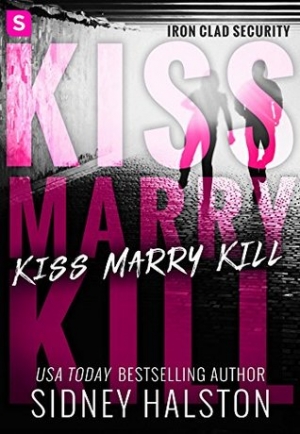 Five years ago they fell in love after one whirlwind summer. Now she’s an internationally famous musician and he’s officially out of the military, but when their worlds collide, can they keep things strictly professional? Sweet, thrilling, emotional, and sexy, fall in love with Megan and Jax in USA Today bestseller Sidney Halston’s Kiss Marry Kill.

It was just supposed to be a regular Thursday afternoon…and then he saw her. Sitting in seat L214, one seat over from his at the baseball game, right next to her douche of a soon-to-be-ex-boyfriend. An impromptu kiss for the kiss cam, and Jax knew his life would never be the same. Five years and a tour in Afghanistan later, Jax is back stateside running his own private security firm, Iron-Clad, with his best friend. He isn’t the man he used to be… but Megan isn’t the sexy and sweet, though sheltered, twenty-two-year-old he left behind, either. And she’s in trouble.

…but now they’re on the run.

Megan Cruz has made something of herself. She’s turned her dreams of pop stardom into a reality. But when a deadly stalker breaks into her home claiming to be her number-one fan, the only person she can turn to is the boy who got away. But Jax isn’t the same carefree charmer who stole her heart, then broke it when he joined the military. This man is seductive, hard, guarded. And he’ll do anything to protect what’s his.

The blurb pretty much sounded like my romantic suspense catnip so I had high hopes going into Kiss Marry Kill. Unfortunately, I found the story a little disjointed and the (brief) separation of the protagonists late in the book felt entirely for plot purposes rather than anything that made sense or felt organic.

Jackson Irons is one half of “Iron Clad Security” – the other half is Jax’s best buddy from the Marines is Josef Clad. (Perhaps I’m too picky but the name felt a little too cutesy and I did roll my eyes at Joey’s surname.) Jax and Joey set up their business after leaving the military – in Jax’s case also after he recovered as best he could from serious injuries sustained while deployed and which left most of his platoon dead. However, apart from brief mentions of six months in hospital and some ongoing pain in his leg, not much attention was paid in the book to the aftereffects of his injury. On the other side of the ledger, Jax still does have nightmares and feels very guilty about the deaths of his teammates and he is open with Megan about having had extensive therapy. I was never quite sure why Jax felt so guilty. In the book he obviously feels he dropped the ball and holds himself responsible for the attack which killed his men but I wasn’t clear exactly why. As far as I could tell, he was off duty when the attack took place and he ran into danger in order to try and save his men.

Five years earlier, Jax had met Megan at a baseball game and they then had a romantic whirlwind romance which was destined to be short term only; Jax was leaving for his next deployment and, at the time, Megan had been about to commence law school. It seemed that their paths would not cross again and trying to force a long distance relationship was not what either of them wanted given the paths they were each on. Jax always wondered about Megan afterwards but he deliberately didn’t seek her out or Facebook stalk her or anything; he assumed by now she’d be happily married with a child or two and he (Jax) would be a (hopefully) happy  memory for her but nothing more. Because he feels so strongly for Megan, while he hopes she happy, he doesn’t feel the need to see evidence of it. However, when Jax finds out that Megan has narrowly  missed a serious assault (or worse) in her own home, he Rambo’s up and gets Joey’s cyber-skills on the case, arriving on Megan’s doorstep in time to coax her out of the closet where she had been hiding in fear when the stalker was in her house.

Megan, even though traumatised, is delighted to see Jax again. All her friends know about “the Jax” and how his encouragement to do what makes her happy rather than following the path laid out for her by her parents led her to her Grammy-winning musical career as the lead singer with the girl band, TNT. TNT stands for Tamara, Nelly and Taylor – the original band members. When Tamara good hooked on drugs and booze, she departed the band and Megan took her place. (I actually liked that Megan’s name didn’t start with T. It felt more authentic somehow.)

I understood why Jax didn’t search for Megan. I was less clear on why Megan never tried to find Jax.

In any event, once Jax storms back into her life, Megan is all about being with him forever. Jax initially resists because he feels unworthy of her but it doesn’t take long before their chemistry is too much for either of them to resist.

The story skips back and forth from “five years ago” and “present day” – I found much of their interaction in the flashback scenes quite charming. They were my favourite parts of the book actually. Their meet cute was awesome and apart from one aspect (which I won’t reveal here) I totally bought into their interlude.

Where the story fell down was in the suspense plot. The motivation of “Ryan” the stalker was never entirely clear. I guess he was just supposed to be a weirdo but there were reasons I was expecting more about this and it disappointed me that there wasn’t. I don’t want to give too much more away about the stalker/threat storyline other than to say how it ended up felt very obvious and really, Jax ought to have worked it out because I figure if I, not-a-professional-security-agent/bodyguard could, then he definitely should have. Some of the things “Ryan” did felt like they were there to create a crisis for Jax and Megan in their relationship rather than because the escalation made any kind of internal sense. And, just how some of the stalkery things were achieved was never actually spelled out.

Jax lost points with me when, shortly after appointing himself Chief of Megan Cruz Security, he fails to consult with Megan (even after specifically agreeing to do so) and ruins her entire garden (and let me just say that the phrase “ruins her entire garden” is a MASSIVE understatement for what he actually did). She forgave him for that way sooner than I would have.

Many of the transitions between scenes felt jagged and I had the sense that the story had to get from Point A to Point B and so, even if there was no link in the paragraph, that’s what was going to happen. I found myself with a bit of mental whiplash.

Some of the things in the book didn’t make sense to me or felt too unbelievable. For instance, shortly after Megan and Jax first meet, he talks about his dad and tells her:

“He’s the only person I’ve known to have ever died. I’ve never been to a cemetery before.”

The latter I could possibly believe, but the man had been deployed in Afghanistan and he’d never known anyone ever to have died?

There were some highlights in the book for me nonetheless. As I said above, I enjoyed the flashback scenes. I also liked the bit where Jax and Megan go fishing and I did chuckle at this (when they were all on the tour bus)

“If you two start humping, it’ll be all our business.” This time the muttered reply was from a decidedly masculine voice from the bed below theirs.

“She’s right, baby,” he whispered in her ear. “You’re loud. Always have been.”

“Am not,” she whispered back.

Kiss Marry Kill was a bit of a mixed bag but ultimately it worked better for me in concept than experience.