What Janine is Reading in Midwinter 2017

Perhaps this post should be titled What Janine is Rereading, since the books mentioned below are all books I’ve read before.

This was my third time reading Indiscreet. I first read it in the early 2000s because it was recommended by a number of people in a romance readers’ Yahoo group I belong to. On rereading it recently, I was glad to see that it is still a terrific read even now. Some aspects for the beginning are a little dated, but the second half packs quite a punch. 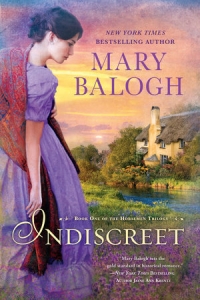 Catherine, a respectable widow, is living in a small village cottage when Rex, a viscount and twin to the local nobleman, visits his brother. Catherine mistakes Rex for his twin Claude, her landlord as well as her friend, and she smiles at him, a gesture Rex mistakes for flirtation and perhaps an invitation for more.

Thus begins Rex’s insistent pursuit of making Catherine his mistress. She rebuffs his offer but also gives him mixed signals (there are good reasons for this revealed later on). Eventually, in a careless moment, Rex accidentally does Catherine a very bad turn.Catherine’s past is tragic and complicated (and could be triggering to some readers, too). When Rex learns about it he really comes through for her, and there’s a great payoff for all that has come before.

The book is also a terrific exploration of slut shaming; without being heavy-handed, it really hammers home how women are so much more despised then men though their “sins” are often smaller and sometimes nonexistent. Reading the book got me thinking about how some older romances had their own subtle social justice messages.

In my earlier readings of Indiscreet, I was angry with Rex for half the book. This time, I was more understanding. He was still in the wrong, but I felt that he wasn’t 100% the callous cad he had seemed to me the first time. I paid more attention to Catherine’s attraction to him and the early indications that he had a heart than I had before.

Though in the first half, Rex tarnishes his armor quite a bit, that is necessary to telling this particular story, and the second half is so well-written and has such a satisfying payoff that I’m giving Indiscreet a B+/A-.

Megan Whalen Turner’s Queen’s Thief series is one of my favorite YA series. After a seven-year wait, a fifth book, titled Thick as Thieves, is finally coming out in May, so my husband and I decided to reread the prior four books to refresh our memories before Thick as Thieves is released.

The Thief by Megan Whalen Turner

My mini-review here is going to chime in with this Amazon review titled “This book is a four, unless you read the whole series, then it’s a five in retrospect.” 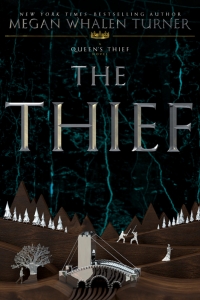 The first book in the series is narrated by the half-starved, rude Gen, a thief who bragged about having stolen the King of Sounis’s seal and was then jailed. As the novel opens, Gen is offered release from the king’s prison if he’ll accompany the king’s Magus, the soldier Pol, and two of the Magus’s apprentices on a journey to steal a mysterious object.

It is only a quarter of the way through that we learn what the object is, and that its theft could shift the balance of power between the kingdom of Sounis and the two neighboring kingdoms of Attolia and Eddis. Peppering the narrative are folk tales about the gods—folk tales that become more relevant in the novel’s second half.

This was my third time reading The Thief and I was blown away by how much I loved it this time around. It wasn’t always a great favorite of mine. I had difficulty getting into it the first time I read it—its first half felt slow and filled with what seemed like lengthy descriptions and petty squabbles. Two of my friends haven’t been able to finish it and another only finished it on the second try, though she now loves the series.

For that reason, I’ve sometimes recommended that if readers just can’t get into it, they skip ahead to book two. But this time I enjoyed this first book so, so much. Turner writes all her books to reread differently than they read the first time; these books are meant to be reread.

Knowing from the beginning who all the characters were and what their hidden agendas were made the first half of the book highly entertaining. Things Gen did which I originally dismissed as petty, foolish or annoying I now saw in a much different light–as smart moves. The double meanings and unreliable narration had me laughing out loud in several places.

Knowing what the future held for all the characters made the book extra delicious, too. I was able to anticipate not only what they would learn about each other later in this book, but also what fate had in store for them in future books, and I noticed how Turner wove certain motifs through multiple books. The scar on Gen’s cheek, for example, or the way the myths of the gods echoed the characters’ journeys in certain ways.

I came away with so much more admiration for how intricate and clever a novel The Thief is than I had ever had before and I feel a little embarrassed that when I first read it, I gave it a B-. This time I enjoyed it enough to feel that it merits an A.

The Queen of Attolia by Megan Whalen Turner

I then moved on to Queen, which I *also* enjoyed more this time than ever before. The way Turner plots her twists and revelations is what makes the books so fascinating to reread. The first time they are read on one level, the second time, a new light is cast on the events of the books which allows for a different reading. 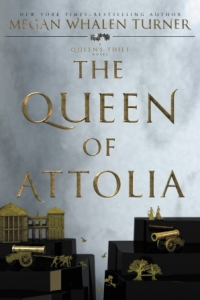 I don’t want to say too much about the plot of this book so as not to spoil the big revelation that comes toward the end of The Thief for those who haven’t read the first novel, and I also recommend that you avoid the back cover copy for The Queen of Attolia and later books if possible.

But I will say is that something awful happens to Gen early on in The Queen of Attolia, and that this is the book in which he matures into a man. He is still bright and audacious here, but for the first time, he is also dangerous.

Unlike The Thief, this novel is written in third person and in multiple viewpoints. Here, the countries of Eddis, Attolia and Sounis are at war. There is a pretty amazing romance that begins midway through this book and continues in book three. The Queen of Attolia was originally a B/B+ for me but it’s an A for me this time.

The King of Attolia by Megan Whalen Turner

With this one, the pleasure of rereading wasn’t nearly as disparate from my prior experiences. This has always been my favorite Turner and it probably still is. While, like Turner’s other books it has some big reveals, by this point in the series readers know better than to share the Attolian guard Costis’s view of Gen.

We may not know all the particulars of the con game, but knowing Gen from earlier books makes us aware that there is a game afoot and there’s a very different kind of anticipation and satisfaction that comes from that. 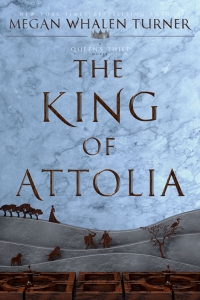 One of the best aspects of the novel is that three books in, there are still new facets to discover in our hero. If I had to compare him to a character whom readers of romance might be familiar with it would be Lymond from Dunnett’s series (I have only read The Game of Kings but other readers have made this comparison as well).

I gave The King of Attolia an A-/A the first time I read it and an A the second time. So it really couldn’t rise in my estimation, but I still have tremendous respect and love for it. Also, Gen’s relationship with his lady love is amazing in this book. We only see it in glimpses, but those glimpses are potent. There is a dance scene that might be my favorite dance scene in any book, and later on, a kiss that is one of the most romantic kisses I’ve read. A.