I’ve been in a reading slump lately and decided to try Heartless, your out of print historical romance from 1995, which has been sitting in my TBR pile for ages, in the hope that it would absorb me. Your older, angstier books are generally reliable in that even if when they are flawed, they make it easy for me to turn the pages. 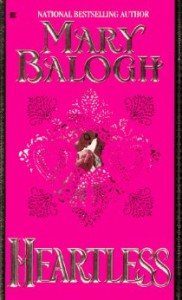 Such was the case with Heartless. It is the Georgian-era story of Lucas Kendrick, Duke of Harndon, and Anna Marlowe, the woman he marries after having only known her for a week. Ten years before, Luke had a falling out with his family after a duel with his older brother, and even the death of that brother eight years later did not bring him to England immediately.

But two years after George’s death, Luke is back from his exile in France, and his uncle Theo persuades him to take a bride in order to settle a dispute between his mother and his sister-in-law, Henrietta, whom Luke once loved. The two duchesses both want to rule Bowen Abbey, Lucas’s estate, and Theo believes that the addition of a third duchess to the family will resolve their quarrel.

Theo introduces Luke to Anna, the goddaughter of Theo’s lover and friend. Despite having cultivated ennui, indifference and heartlessness along with French mannerisms while abroad, Luke is dazzled by Anna, as she is by him. But Anna has an enemy, one who blackmails her, sends her threatening letters, and stalks her. One who has gone to America, but promised to return and to take her away with him.

Anna feels she cannot marry anyone, but she is so drawn to Luke and so happy in his presence that, after trying to put him off by confessing to having no money as well as to having a sister who is deaf-mute to support, she finds herself replying to his marriage proposal in the affirmative.

Luke too is attracted to Anna, perhaps even beginning to fall for her. He gives her an opportunity to tell him if she has more secrets, but she does not take it. And so Luke and Anna are married, and only Luke notices the stranger lurking outside the church in which they marry.

The morning after their wedding night, Luke calls Anna into his study and dashes her hopes that he did not notice the absence of her hymen. He offers her a chance to explain, but though tears rise to her eyes, she remains silent even when he asked her if she loves the man to whom she gave her virginity.

Luke takes that for a yes, but offers her a marriage in which duty and pleasure will supersede love. They will conceive his heir and other children, since they like each other well enough. As long as her past remains in the past, he will overlook her secrecy. He is not capable of love in any case.

There are tensions between Luke and other family members as well. Luke’s brother Ashley wants to keep an expensive mistress and gamble beyond his allowance. When Luke confronts his brother, Ashley accuses Luke of heartlessness. It is a familiar accusation, one that has been leveled at Luke many times in the past.

Luke’s sister Doris, the one member of the family who was most sorry to see him leave and effusive on his return, has fallen in love with an ineligible man – an artist who was hired to paint her portrait. It is during a violent confrontation between Luke and Doris’s suitor at Ranelagh Gardens that Anna is left alone and her stalker, Sir Lovatt Blaydon, approaches her.

Blaydon tells Anna that she is only on loan to Luke, and implies that he will eventually insist on her desertion of her husband. A tense and frightened Anna asks Luke to take her home, and then seduces him in the carriage. She tells him what she has begun to suspect—that she is pregnant. And she asks him to take her to his country estate, Bowden Abbey.

There, Luke and Anna’s marriage faces another threat, this time from the beautiful Henrietta whom Luke has never forgotten. Henrietta befriends Anna and later encounters Luke while he is out riding, seemingly by accident but in reality purposefully. More such meetings occur, leaving Luke both discomfited and, without regard to his belief that he is heartless, afraid that Henrietta might still have power over him. Yet Henrietta’s past is both traumatic and tragic, so Luke doesn’t confront her.

Despite the obstacles in the path of their happiness, Luke and Anna enjoy each other’s company and are good to one another. If Anna wants Luke to be capable of love, she does not complain to him. If part of Luke wishes he could trust his heart to Anna completely, he tells himself the current situation is for the best. Love hurts, and Luke has better cause to know that than most.

What he does not know is that Anna’s past will not remain in the past, and that his wife and the child she carries are both in danger.

I had heard a lot of good things about Heartless prior to reading it—it is a favorite of some of my friends. And it started out well. I liked Anna a great deal—she was sunny-natured and at ease with most people, as well as kind. Despite her caving to some of her blackmailer’s demands, I did not see her as weak. The villain was twisted enough that I understood she had good reasons to feel afraid of him.

Luke was interesting and a bit unusual, with an initial excess of powder and makeup that was attributed to his years with the French. He also had long hair beneath his wig and even had a fan he was in the habit of snapping closed. I might have enjoyed these aspects of his character more if the text—through Anna’s thoughts and words–had not kept insisting that they didn’t make him any less manly. I never bought his heartlessness but I don’t think I was really intended to.

The book was indeed absorbing, as I had hoped. It was easy to keep reading, something I don’t take for granted these days.

I disliked the wedding night discovery plot point partly because not every woman bleeds during her first sexual experience and partly because I’m not a fan of the trope in which the conflict hinges on the absence of the heroine’s virginity.

Nonetheless, I felt that Luke’s discovery of Anna’s non-virginal state could have easily gone pear shaped in a much bigger way, and didn’t. Luke didn’t obsess about Anna’s previous lover or lovers. He didn’t consider his wife a slut. He didn’t suspect her of cheating on him, or suspect that their child had been sired by another man.

I was grateful for all that, and it was a lot of why I liked Luke. I also liked the way his conflict with Ashley was resolved (The resolution of the conflict with Doris felt like it needed more page time than it got). A discovery that resulted from Luke and Ashley’s rapprochement brought about a catharsis to Luke’s feelings about his dead brother George, and that was quite moving.

But there were problems I had with this novel. I’m not a stickler for historical accuracy by any stretch, but I caught an error. Anna’s father could not have been in danger of going to debtors’ prison (due to his title of earl).

A secondary character, the Marquise d’Etienne, a lover of Luke’s who had followed him from England to France, appeared briefly early on in the book. Her sultry and temperamental character struck me as stereotypical in the way French women are frequently portrayed in historical romance.

Anna’s sister, the deaf-mute Emily, was also a problematic and stereotypical character. She was depicted as childlike, sad over her disability even after having lived with it all her life, and able to communicate only with those people with whom she shared a special connection.

As the novel continued on and Anna did not share her secret with Luke despite persistent attempts on his part to give her opportunities to do so, signs of empathy and affection on his part and even his assurance that he would protect her, I grew exasperated. Not so much with Anna, who was too likable a character but with the plot that required her not to share her secret with Luke.

Another aspect of the story that disappointed me involves a spoiler.

I was looking forward to seeing Luke’s walls crumble, but when it happened, it was not due to any breakthrough in his marriage or mending of the fences with his family members. Instead it was the birth of his child which thawed him. Which is nice enough and believable too, but not that satisfying from a narrative perspective, since I would have preferred to see some of the effort put forth in  Luke and Anna’s marriage or even in Luke’s relationship with his siblings lead to this change in Luke’s attitude.

I confess too that the villain’s motivation seemed too convoluted to me, and one of the events in his and Anna’s past not only twisted, but hard to buy.

Heartless isn’t the weakest Balogh I’ve read, but it also isn’t among the strongest. For me this was a middling book, and I give it a C.