Kevin Morrison had it all. A house he worked hard for, a loving wife, and three beautiful children. But it wasn’t until his marriage ended that he realized what the void he’d felt almost all his life meant. Coming out as a gay man at thirty-six is not an easy feat, but he is determined to be true to his heart. Meeting a man who shares his values, and is good with his children would be a bonus, but when the guy arrives in a uniquely wrapped package, and has very specific handling instructions, Kevin needs to decide if he’s up for that kind of love.

Obsessed with order and symmetry, and a paralyzing fear of germs, Cedric Haughton-Disley has lived with isolation and loneliness as long as he can remember. Desperate to be normal, he makes some much-needed changes in his life. If he can commit to his treatment, he might very well be able to procure some quality of life… even if that’s all he can get, as finding love and having a relationship are only possible in Cedric’s wildest dreams. But when a chance encounter leaves Cedric wishing for more, he decides to take a leap of faith, and pursue the guy he wants.

Together the two men make an unlikely match. Cedric needs organization, and Kevin represents chaos. In order to stay together they both need to compromise, but will they be able to deal with Cedric’s issues and the potential disaster, or let it break them apart?

I was smitten with your book, plain and simple. I spent a good amount of time trying to figure out whether the story was that good or it was just that it hit all my buttons, and I finally decided to leave it for your potential readers to decide. One thing I know for sure – the only trope that could make me like the story even if its merits are not as good is “from enemies to lovers” and the guys in this one never been enemies, so I am hoping that what happened was that I fell in love with a really good romance. 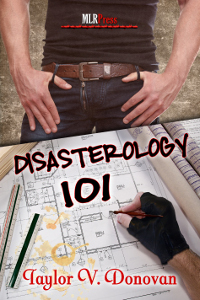 Let me count the reasons I was so impressed with this book. Cedric is not the first character I have “met” in m/m romances who has OCD. Cedric however is the first character (not saying that they do not exist just that I have not read about them) who actively tries to take charge and get some semblance of normalcy in his life *before* a potential love interest comes into his life. I thought his symptoms were very well researched (based on my brief research only), I thought his battles and setbacks were extremely well done. I also have to say that while this is not the first romance where the character who has a mental illness goes into therapy, I really liked how therapy was integrated in the book. It is not intrusive on the love story, and it does not take a lot of page space, but one can never doubt that it is important for Cedric and Kevin.

Of course I can never judge from personal experience as to how effectively Cedric’s illness is portrayed, but from the view of the outsider I really liked it. I liked that while the love makes him feel better as a person and I am sure influences his general mood and helps his strength, the other improvement he experiences comes from medication. And I loved that the writer did not shy away from portraying some side effects of the medication (such as that it decreases sexual performance), built the very naturally moving conflict based on that and still made it so unbelievably romantic for me.

His building romance with Kevin just made me swoon – that’s the best way to describe it. Yes, there are fantasy elements there, but I just went along, especially since it was so easy for me to believe in it. They were in lust almost right away, but it was lust not love, so I had no problem with that. It made perfect sense for me why Cedric was looking for somebody more than a casual hook up, he was already making some improvement in therapy and his doctor even encouraged that. In some stories that I read about damaged guys, I often catch myself thinking that these two need to have a whole lot more therapy before they even think about the relationship. Granted, Kevin coming out at 36 after a long marriage takes a bit more suspension of disbelief to buy, but I can buy a gay man suppressing who he was for that long, especially because Kevin did not come out as “gay for Cedric”, he just came out as gay. I also stumbled a bit over Kevin being so impressed with Cedric (which was fine since he did not know anybody else), but nobody would measure up after one encounter? This was a small niggle for me though.

I also liked how this story handled more dominant and more submissive roles in the building relationship. I typed this sentence and cringed, because in a story which does not have BDSM themes this often translates to me as – “I am the alpha hear me roar and you are somebody who always needs saving and cannot do anything for yourself till I come to take care of you”. This book went into more interesting direction. A couple of chapters before the end of the book Cedric muses about what roles they were taking in their relationship so far (note that they had been dating for just a month at that point, so it is not as if the roles were fixed in stone).

“Money. Cedric had it in abundance, and Kevin didn’t. Although their status was never verbalized, the truth was Kevin behaved like a boyfriend. He may be considerate of Cedric’s needs and let him top sexually, but there was no doubt Kevin was the big, strapping, dominant half in their relationship, taking charge in every aspect. He believed in being the breadwinner, and providing for his partner. He pulled chairs, and opened doors for Cedric. He held his hand when they went on their walks around the neighborhood, and marked his territory by placing his hand on the small of Cedric’s back.Archaic as the concept may be, he much preferred taking a more submissive role. He wasn’t a fart who could not taking care of himself, but Kevin’s breathtaking masculinity made Cedric feel safe and protected. He was perfectly fine with the caveman’s act, but he’d be damned if he would let it break it apart.”

I wonder how the reader who has not read the book would imagine Kevin after reading this quote. No, it is not as if I failed to see the signs through the book that Kevin is a big guy who likes to take care of Cedric. Nevertheless, I was almost shocked when Cedric was musing that he preferred “submissive role”, because if that’s what submissive role meant for him, I would love to see more characters like him. Cedric had been fighting his condition, trying to win some sort of easier life for himself way before he met Kevin and continued to fight it every single day. Maybe fight is the wrong word? Trying to live as normal life as possible? What is normal anyway? I never had any doubts about his strength of character and he continued to remain just as strong as he was when Kevin came along. That’s what I do not always see in so many stories – the moment the alpha male comes around, it is as if the other character’s strength and will power goes somewhere and never comes back.

And as you can see based on the last sentence of the quote Cedric’s thoughts are at time they are having problems, and almost at the verge of break up. And as far as I am concerned Cedric gets a huge credit for making sure the actual break up does not happen. I loved the characterization and this development – almost break up, but they managed to not make it happen. And notice how dominant/submissive does not translate into being that in bed? And why should it be necessarily, especially since the story is not about BDSM?I also never found Kevin to be overbearing, but instead a rather nice guy, who wanted to do everything he could to help his boyfriend. Of course he had his issues and his pride and money was a concern, but I never wanted to shake him and tell him to snap out of it.
Oh and I have to note as an aside that Kevin’s ex-wife was likeable. That was so very refreshing and when she committed a misstep she apologized. Have I mentioned how very pleased I was to meet such a rarity? Of course when people divorce often there are often plenty of hurt feelings to go around, but surely there are situations where two people manage to stay friendly for the sake of kids. And while they may not be in love anymore, they do not hate each other either, kids or no kids. According to most m/m stories I have read (not all but definitely most) where ex-wives are present such thing never happens. I know I sound a little sarcastic, but I truly was impressed by Jenny. She was mostly a supporting character and may have used more fleshing out (as most of the supporting characters actually), but I liked her.
I loved this book and can recommend it.