Giving up her out-of-wedlock son was the only right choice. Still, Kate Woodward aches that she isn’t part of his life. She can’t heal herself, but she can help former Confederate soldier Robert Markham rebuild his war-shattered life. But helping Robert is drawing them irresistibly close–even as Kate fears she can never be the one he deserves….

Battlefield loss and guilt rekindled Robert’s faith and brought him home to Salisbury. And Kate’s past only makes him more determined to show this steadfast, caring woman that she deserves happiness. Now, with her secrets revealed and her child in danger, Robert has only one chance to win her trust–and embark on the sweetest of new beginnings….” 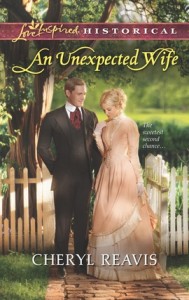 Ever since I read “The Prisoner” and “The Bride Fair,” I’ve been waiting for Kate Woodard to get her HEA. It’s so good to see these characters again. All are recognizable but all show signs of recognizable growth: Maria and Max as a family, the townspeople in regard to the Reconstruction, Kate in her maturity as the spinster of the family and Robert in coming home and atoning for the pain he caused. I will say that your choice of hero sparked a lot of questions in my mind as to how you’d pull off his story. I also wondered why the blurb said Rob’s hometown is Atlanta. Note that I’ve fixed that in my version of the description. ;)

Perhaps I just need to read more contemporary inspies but most of them haven’t worked as well for me. Since this is – obviously – a historical the inclusion of faith as a major factor in the lives of the characters feels more “dyed in the wool” for me. It’s personal growth in faith and not REPENT YOU SINNER! It seems to flow naturally from their lives and circumstances and not be there to try and save me, the reader. I appreciate this.

Kate and Robert grow more over the course of the book. Kate in her knowledge – she can lay a fire now – and in the realization of how her son’s life will proceed best. Robert had to make amends to his family and the people who loved and mourned him or who think he hurt them and their loved ones. I like that Kate doesn’t seek forgiveness for her sin – she feels she might have sinned but her son isn’t a sin – but rather peace and acceptance of the things she can’t change. She’s endured the situation and lived weighted down under family expectations for so long but now she can find the freedom of telling someone else about her struggle, of sharing the burden with someone who is there only for her.

Robert sank under the weight of his own feelings of guilt and remorse following the death of his younger brother at Gettysburg. When faced with the unbearable pain of his physical and mental wounds, he retreated away from those he felt he had let down. Initially I thought I wanted to see more of Robert’s POV especially his reunion with several people – among whom is the sister who has mourned him as dead for 7 years and the mother of the woman he loved who blames him for what her daughter became. And then that woman herself. I mean, Rob left a trail of grief in his wake and we see almost none of what must have been some impressive Southern “giving him what for” meetings.

Then upon rereading parts of the story I came to realize that what must have gone on during these meetings is displayed and told by Rob during his sermon for the town. Instead of slinking around and only abasing himself and allowing himself to be confronted in private by those he did wrong, he goes a step further and lays himself bare before everyone. Since this is an inspie, using a church sermon as a way to tell people how he thought he’d failed his promises, how low he’d sunk during those lost years and how he found his way back to religion and afterwards home is perfect.

Are Rob and Kate right for each other? Yes, I believe so. They compliment each other and have found The One who will accept their imperfections as human beings while still supporting them. Neither is trying to save the other with religion yet they both find their way back to it over the course of the story. Rob trusts plain speaking Kate to tell him what he needs to know after so long away from NC and Kate discovers a man to whom she can reveal her past, who doesn’t load her down with how he thinks she should act or behave.

Meeting up again with the various townspeople, Occupational Army and Woodard household members was a joy. Seeing how the love between Max and Maria has deepened, how well Jake and Joe are, how ever efficient Sergeant Major Perkins remains and how much Mrs. Kinnard still strikes fear into the Union Army brought back old times and books. I also enjoyed spending time with Mrs. Justice and Mrs. Russell and a few new characters.

The wait to return to Reconstruction Salisbury and for Kate to find her someone was long but worth it. The choice of Rob, complete with all his issues, was inspired. Making the book an inspirational is a good fit with what Kate and Rob have endured and triumphed over. Dare I hope more books will be set in this world? B