Despite this being a romantic suspense, the story felt flat to me. Hope Banning is a workaholic park ranger who plans to take her sister, Faith, white water rafting on their annual vacation together. Faith and Hope are the stereotypical good and bad girl with Faith having low standards in men and having a preference for skimpy shorts and bikinis. Hope is the quieter one who prefers demure swimsuits and conservative clothes. 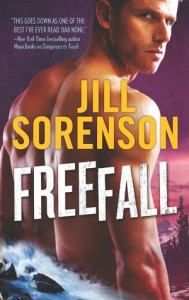 Sisters Hope and Faith alternate planning their yearly vacations. Last year, Faith took the two to the beach. This year’s rafting trip is cut short when a Search and Rescue call is put out in response to a plane crash at Angel Wings, a remote mountain top in the Sierra Nevadas. Hope sends Faith off on the trip, promising to catch up down river.

At this point, the story splits into two tracks with Hope responding to the SAR call as she is required by her job to do and Hope going off with the rafting group which consists of the guide and three college guys and one unexpected stranger.

Hope cannot climb alone and takes Sam Rutherford with her, reluctantly. Sam is a local celebrity, having won an Olympic medal and been featured for his daring climbs at one time. But since the death of Sam’s fiancé during a climb, he’s turned into a recluse and the idea of climbing with another woman scares him to death. What the two find at the top of the mountain suggests foul play and a possible dangerous man on the loose.

The two share a somewhat complicated history in that Sam and Hope had a one night stand that Hope may have desired to have been longer. Sam barely acknowledged that he once saw her naked. I wondered if Sam’s malaise permeated the feel of the story. Months later, the characters I remember the most from this story are Owen, the former felon, and Faith.

Because Sam and Hope’s relationship is stilted in the beginning, sexual tension is infused through Faith who, in keeping with her bad girl status, picks one of the single guys on her trip and starts flirting and making out with him. Of course, the reader knows how truly poor this decision is. Again, the bad girl being shown to have poor decision making skills is a bit par for the course.
Of course, Hope is portrayed at being worthless in a social situation, asking Sam if his dead fiancé was pregnant at the time of the climb that resulted in the fiancé’s death. It was such a weird, out of the blue, question that I wasn’t sure what the purpose was. To poke at Sam? To show how insensitive Hope could be? To provide a prompt to reveal stuff about both of them to the reader? There were a number of these small scenes where Hope would play the social misfit so we could have some kind of mini argument or, I suppose, tension between the two.

I wasn’t totally convinced at Sam’s climb out of depression. He suffered from some amnesia being in the San Diego earthquake. He had lost his fiancé. He was engaged in random hookups and dangerous night climbing activities. But place a woman he slept with in danger and apparently that could all be shook off.

There is a lot going on this book from the mystery of the plane crash, Faith’s doomed hookup with the stranger, and Hope and Sam’s half hearted romance. And while it is serviceably written, it’s not a book that stuck with me.  C