Blurb:
He can find a use for his lover’s hands…except when he needs help the most.

Kellen is short on cash—at least until his first novel starts to sell—but he has plenty of friends. None of them, unfortunately, share his love of books. For that he turns to IM chats with Mike from his online book group.

Though he manages to coax the shy, socially inept pathologist into a real-time meeting, Kellen has no intention of letting his new friend become more than a casual lover. Shaky finances and ailing mother aside, self-sufficiency is Kellen’s prime directive.

Mike considers himself a nerd of the highest order—short, bespectacled, prone to blurting out the wrong thing at the worst possible time. Meeting Kellen face to face is the biggest risk of his life, and he wonders if they’ll get more body parts together than just their faces.

First meeting leads to first date—first everything for Mike—and soon Kellen’s faced with breaking his just-friends-with-benefits rule. Yet as his elderly mother wanders deeper into senility, Kellen wonders if it’s better to lean on Mike rather than fall.

Warning: Contains an emotional love story between a too-proud-for-his-own-good writer with allergy to the L-word, and a painfully shy scientist who takes his sisters’ nagging to “get out there” literally. Oh, and an adorable stray cat.

I enjoyed how slowly the love story between Kellen and Mark developed. There is no Insta!Love in this book. Mark and Kellen are chat buddies on the internet first and they realize that they have a love of reading in common; I felt like they became friends first and lovers second. Yes, your supposed friend on the Internet can turn out to be the creep of the highest order, as Mark thinks about at some point, but the person may become a great friend too (I can certainly relate, having made some friends on the Internet who have become real life friends, not just email friends). 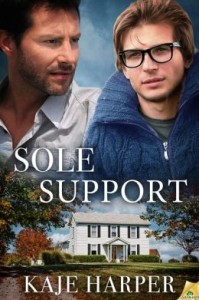 I easily bought Mark’s not having a boyfriend before because he was so painfully shy and often could say the “wrong” thing in the social conversation. I had more trouble buying Kellen’s not having any serious relationship, only casual sex, before he reached the age of forty. Once he was confronted with his mother’s illness, I could totally understand how he initially did not want to accept help and pushed people away. But I did not think that his backstory was developed enough to explain why he was a loner before the problems with his mom started. I mean, we are told that he is independent person and does not want to lean on anybody, but I did not get from the book that he never wanted a relationship before. Neither had he appeared to be as shy as Mark was, or shy at all. I told myself that I should just file my relative dissatisfaction with that part of Kellen’s characterization under “just because” and moved on.

I was kind of worried when we learned that Kellen was a writer. I am not very fond of mm books that are about an author who writes mm romances because too often they contain many winks towards real life mm writing and I don’t really care for that. Luckily Kellen writes gay mysteries, not mm romances, and more importantly, I at least did not spot many winks, just a few. We learn that writing is very important to him, that it is a part of his personality and I liked that.

On the other hand I would have liked to learn a little bit more about Mark’s job. I thought it was very clear that Mark was a very intelligent guy because of his love of reading if nothing else, but I would have been interested to see just a tiny bit more of him in his professional environment.

I liked how both guys changed a little bit over the course of the book, but did not acquire entire personality transplants. Mark’s painful shyness and Kellen’s stubborn independence are still there when the book is over, but Mark learns to get out of his shell at least with people whom he holds dear and Kellen learns to accept help from those he loves when he really needs it.

I am not always impressed when romance book tackles a serious issue of any kind – not because I do not like it, quite the contrary. I just feel that too often that serious issue is handled very superficially, just to dress romance up and then everything is good and shiny and I am left feeling very annoyed.

I really liked how the topic of Kellen’s mother getting sick was handled and Kellen’s caring for her and having to make tough decisions. I thought it was incredibly well done and while it may have brought the feel of sadness, I really enjoyed the way it was written. I thought it was very realistically done too. Because there is no perfect solution and it is terrible when your loved one is losing himself or herself in their illness. And it does take a toll on the person who chooses to become a caregiver as well.

I was very thankful to see Mark’s sister in the book. I have to admit that this is the first female character in the author’s books that I actually liked (I have not read all of her books, but I have read almost all of them) and who had a bigger presence in the books than just a few lines.

Overall I enjoyed this book. I thought the development of the relationship and problems that characters faced were nicely weaved together and at the end I believed that guys will have a future together. B