I’m a big fan of this series and you’ve become one of my go to romantic mystery authors.  I love the Delphi Center and the strong, smart women that people your stories.  The detailed investigative techniques add not only realism but flavor to your stories.  But “Exposed” is probably my least favorite in the series. The suspense was fairly well done but the character arcs were sketched out and never fully developed. Or maybe to use camera terms, Maddie was underdeveloped and Brian was overexposed. Neither made for a good romantic couple. 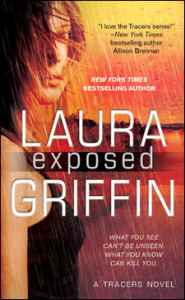 Maddie Callahan is a photographer who also does crime scene photography work for the Delphi Center, a private investigation center. One day she takes a photograph and then is mugged, her equipment stolen. In the course of the ensuing investigation, Maddie learns she may have photographed a crime in progress. Brian is a new FBI agent that is assigned to her case.

The attraction by Brian Beckmann to Maddie is immediate and while I understand it is challenging to develop the romance while at the same time navigating a complicated suspense plot, the attraction came out of nowhere. As Brian persisted in pursuing Maddie despite her repeated refusals, and I was even more confused. Why was Brian working so hard to capture Maddie when there were easier fish in the sea?

On Maddie’s part, her resistance to Brian based on her fear of gossip was underdeveloped and felt forced and lame. Was she really that tender-hearted that dating a man younger than her would result in such furious gossip that she wouldn’t be able to function?  I wished I had seen more about why a confident woman would feel so vulnerable to the voices of others around her and why she believed that the older woman/younger man relationship would be such an issue of contention for her neighbors. Her co workers seemed not to care one whit.

The best part of the book was learning about Maddie’s job as a camera tech for the CSI group and the Delphi lab. Crime scene photographs play a vital role in preserving the scene and compiling evidence. It was another look at police procedure that I haven’t read a lot about. While I liked the idea of the older woman, younger man romance, I felt like the age difference and “what would people think” didn’t work as a conflict. The emotional part of the story limped along, pushed into crevices here and there between the suspense plot. C