REVIEW: Want Me by Rowan McBride

Joel Beckett is blessed. He’s popular with the ladies, a star on the football field, and worshiped by everyone on campus.

Only Walker’s worship has crossed the line, driving him to invoke ancient magic that binds them together in an inescapable downward spiral. Now reality is shifting, and with each new life Joel is forced to watch Walker steal away another of the blessings he’d always taken for granted.

It’s never enough. Cursed blood runs hot, and with every turn of the spiral, Walker breathes the seductive words that Joel can’t resist. The words that could drag them both into hell.

Note: This is a re-edited, revised version of one previously released in print by another publisher.

It is hard for me to review this book because I am afraid that I won’t be able to do it justice. Readers should note that the book was published in 2008 or 2009 and this edition really is not that different. I believe that you mentioned on your website that the prose was tightened and one extra chapter and an alternate ending were added. If readers have the previous edition, I do not believe that they should buy this one because the story did not appear changed much even with addition of alternate ending. The only reason to buy it is if they want an eBook, because I believe that the first edition was only available in paperback. I suppose being a huge fan of the author is another reason to buy this edition. 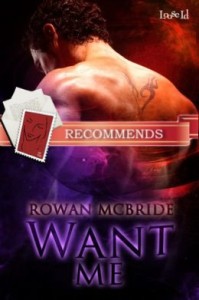 I really have no idea how to characterize this book. When I purchase a book with intention of reviewing it or I receive a complimentary copy for review, I make sure that I do not even glance at other reviews. Since I did not originally purchase the book for review, I had read some reviews already. One of the recent reviews on Amazon called this book a “dark erotica”, but while it is certainly dark, the sex scenes mostly fade to black and those that do not fade to black are not very explicit. Would I call it a romance? I don’t think so, because to me romance implies more positive interactions between the main characters. On the other hand, romance is also about a couple working through obstacles to form a relationship and that is pretty much what happens eventually in this book. I guess I will settle on “dark erotic romance with magical/fantasy elements”.

I read this book three or four years ago and when I reread it in preparation for the review to be sure I hadn’t missed anything important, I discovered that I remembered all the important things really well. You can see from the blurb that this book is about a character Walker Cain (yes, he is supposedly the descendant of *those* Cains), who is obsessed with Joel, who is loved by everyone around him. Walker casts a spell that will take everything from Joel which the latter had taken for granted. And yes, that would include forcing Joel to have sex with him several times. Every time the spell is invoked Walker and Joel are thrown in the new life on the time spiral. I cannot and will not tell you why Walker felt a need to invoke the spell multiple times for the fear of spoilers. I however will tell you that there is an end point to the curse at the end of the book and both of them end up in the life which hopefully they would end up living till its natural end.

In 99% of such or similar situations, the description alone would cause me to run away screaming from the book. As a rule I *hate* the characters like Walker Cain, hate them with a passion even when their manipulations do not include rape. If you know that you hate this kind of set up in the book, I think I would encourage you to stay away from it – for me the book worked as one of the very few exceptions, despite the trope it invoked. I am going to try to work through why this particular book worked for me.

I think one of the most important reasons why this book is on the shelves of my favorites and not on the “most hated” shelf is because the story calls a spade a spade. The obsession which Walker has for Joel is *never* glamorized. It is called “sick and twisted”, and I did not feel that the writer was trying to cover it with something nice and sweet. And something interesting happens along the way – while the sick and twisted part does not go away, both characters change along the way and do so believably, or at least it was believable to me. Somehow I “bought” into them both learning their lessons, and when Joel also saw something else in Walker (not just his worst parts BUT something good), I found it convincing. The book also worked for me because when I am angry at a character and believe that the character has done something terrible, it helps me to forgive him if I see him suffer. And boy, does the author not let Walker off the hook. It did not even bother me that Joel had to learn some lessons along the way, such as how to be less narcissistic, even though he was mostly a good guy to begin with. I think it is because Joel’s lessons did not depend on making Walker look better if that makes sense.

I thought the plot itself – rather straightforward and character based as it was (there are only three characters in the book whose parts are important for the plot) – was very creative and the use of magic made a weird sense and still made me feel that I was reading almost a contemporary realistic novel, even if it when the plot was jumping between the multiple lives, magical curse in action, etc.

I think this is one of the most unusual books that I have ever read in the mm genre, and I highly recommend it, but you should be sure that you are up for reading a dark story. B+