REVIEW: A Home for Her Heart by Janet Lee Barton 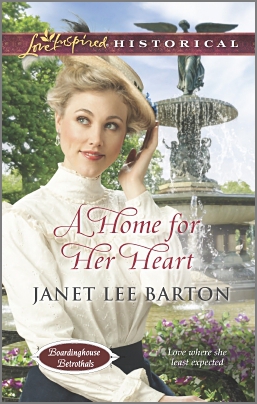 Magazine writer Elizabeth Anderson has sparred with newspaper reporter John Talbot for years. Though they cover similar stories, John thinks Elizabeth’s writing is trivial, and she finds him too boastful. So when they must work together to investigate New York City’s worst tenement houses, they’re surprised by the great team they make.

Despite their professional rivalry, John and Elizabeth begin to trust each other as they grow from competitors, to friends, to something more. But then John makes a startling discovery that would break the story—and Elizabeth’s heart—wide-open. John’s always been driven by his career—can he give up one dream for another?

I enjoy reading the Love Inspired Historicals mainly for the unusual times and settings which are featured in them. There are only so many Dukes I care to read about and even Western gunslingers/sheriffs get too familiar after a while. After watching the PBS series on NYC which mentioned Jacob Riis’s 1890 book “How the Other Half Lives,” it was the tenement investigation in the blurb that caught my attention and made me decide to give this one a try.

While I had hopes for some hard-hitting journalism, the center and focus of the book was mainly on the life at the boarding house where Elizabeth and John both live. It’s a loving, almost family environment with a kindly owner and several very nice but ultimately mainly forgettable tenants. Mrs. Heaton does have her rules and PDAs are mainly limited to engaged couples and exuberance at baseball games while female residents aren’t supposed to be out at night alone.

The details about life there, in NYC and in the tenements are numerous and obviously well researched but there is a lot of repetition. Meals are described in detail, the heat, trolley transport and dinner, and nattering conversation. Some of this was pertinent to the plot while some, alas, was mere filler that I often skimmed.

Elizabeth and John have both had bad past romantic experiences. John got fired from his newspaper job due to the boss’s daughter leading him on while Elizabeth’s fiancé turned out to only want her for her family’s money rather than herself. Both now shy away from romance and have vowed to never risk their hearts again. Lest we forget that, this is mentioned in almost every chapter.

Since this is the second book in this Boarding House Betrothal series, the characters of another of your books are secondary ones here. As such, I expected some background information which I think, for the most part, is sparingly done. Readers who are new to this world, as I was, can start here and not be lost.

The investigative reporting is much more low key than I was hoping for mainly consisting of Elizabeth and John wandering around some tenement buildings, taking some pictures, talking once or twice with people there and then telling each other about searching for information at City Hall. John has one short dust-up with a manager and that’s pretty much all. To be honest, I was a bit disappointed in this. It did serve as a contrast to Elizabeth’s life of wealth but since she’d ditched all that in order to live her life on her own terms, even this part of the plot was dulled instead of hard edged. Eventually the investigation touched closer to home but the brief flare up of emotion and tension soon fizzled out as well.

So mainly this story just sort of drifts along at a leisurely pace. Two perfectly nice people finally really notice each other, begin to get along, have their momentary doubts and then happily fall in love. Some of the tenements are cleaned up, true love is found and lots of good meals are eaten at the boarding house over pleasant conversation. There’s nothing really bad about the book but it’s one I think won’t stick in my mind for long. C