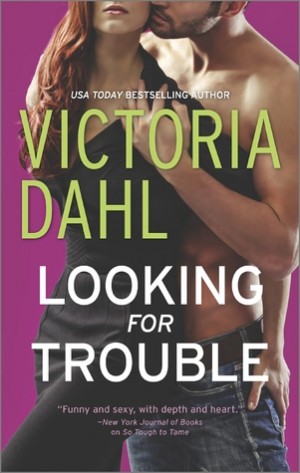 It was twitter chatter that made me pick this book up and I was really glad I did. Sophie Heyer is the local librarian who lives a quiet life full of secret desires for the rough and ready type of men. In walks Alex Bishop whose motorcycle boots and tattoos are as tempting as ice cream to a woman on a diary free diet.

The conflict for Sophie and Alex centers around a twenty-five year old scandal when Sophie’s mother ran off with Alex’s father. It was learned that the two died rather than completely abandoning their families but the affair has had lasting repercussions on both families.

Alex’s mother spent his childhood chasing down phantoms, trying to locate his father at all costs. When he returns home at the request of his older brother and the promise that his mother is better. On his arrival he is already beset with regret. His mother seems more mad than ever. He feels disconnected with his brother. The one thing he does like is Sophie.

He doesn’t realize right away that she’s the daughter of the woman Alex’s mother blames for ruining their lives. Sophie has her own family problems. Her brother is having his own identity issues and starts pressing Alex’s family is uncomfortable ways.

Sophie looks like her mother and is the subject to vile things from Alex’s mother on a regular basis. Neither Sophie or Alex blame the other for their parents’ issues (although I think Sophie does a better job of this than Alex, particularly later in the book). The conflict was compelling and I bought into the resolution.

The other reviews of this book mention the sex as hot but confusing and I agree. Sophie, the subject of such onerous abuse in her hometown, dresses like the stereotypical puritan with modest clothes and hairstyles. She lives a quiet life yet no matter what she does, there are those who call her a whore, just like her mother.

In the bedroom, Sophie enjoys being called the same thing. Given her past and the way she lived her outside life, I would have liked some internal monologue on this subject. Alex’s immediate assumption of Sophie’s sexual preferences (good thing he guessed right) was also a little convenient. It reminded me of another book where the hero said that he was able to smell the heroine’s submissiveness.

It’s possible that some of this was explained in the prequel novella but I didn’t read that.

The ending is very much a HFN or leading up to a HFN which I didn’t mind. Their romance was based mostly on a physical attraction and the way in which their lives were changing, it made sense that the conclusion was a bit up in the air.

Probably the sweetest male in the book is Sophie’s dad who takes the abuse of being a cuckholded husband, raising two small children, and never ever getting angry at his kids not matter how provoked he was.

It’s not the same romance that I’ve read before. It’s very sexy. I liked both characters. It’s got flaws, but it’s a good way to spend an afternoon. B-