REVIEW: Driving into the Sun by Dev Bentham

Bad choices. We all make them, some more than others. Dusty’s choices have left him unemployed, broke and practically homeless. Despite the major issues he has with his family, his only rational choice is to sell everything and move into his parents’ basement. At thirty. Looking for a ride west, he answers a phone ad. The voice at the other end of the line flows like dark, rich honey. Finally something to look forward to—listening to Joe’s voice all the way from Illinois to Idaho.

Rather than the hip crooner of Dusty’s fantasies, Joe turns out to look more like a panhandler. Is that because Joe dresses down, or are Dusty’s preconceptions about Native Americans clouding his vision? Joe is silent more often than not. He has a complicated past and still has amends to make. But he is ready to move on. Dusty feels trapped. Two damaged men, one small car driving two thousand miles into the sun—sometimes things need to break down before they can get fixed. 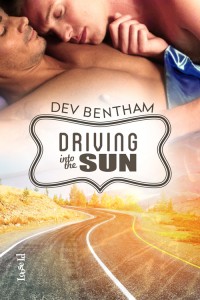 I have read and liked several of your works, so when you wrote to DA asking us to review your new release, I was very interested. Unfortunately while I liked your writing style and mostly enjoyed the characters, I just did not buy that their extra fast connection is necessarily going to be the everlasting love the narrative wanted me to believe in.

Dusty and Joe connect to go on this road trip in order to share expenses and have company while they get to the places they need to go to. And, they both have plenty of demons to battle. Joe has tried (and so far succeeded) to stay sober for five years, while Dusty fell in love with his boss who was arrested for financial fraud. While Dusty was not charged, he was fired and pretty much almost homeless.

Their trip lasts a little bit over a week and the book asks me to buy that in this short time Dusty reevaluated his choices, realized what he wanted from life, and was ready to move on with the right person. Unfortunately I could not buy it at all. It is not that I did not like Dusty, I did, but within the first couple of days of their trip he is ready to trust the wrong person – again. There was a third guy in the car with them who was only going to be there for the part of their trip. Dusty decided to go to a party with him when they got to the place where they stopped for a day or so, despite his inner voice being in doubt, despite Joe saying don’t go. What could have happened, right? The party ended in disaster and if Joe had not helped him, it would have been an even bigger disaster. Then, just a few days later, Dusty is absolutely sure that Joe is the one for him. I am not even talking about Insta!Love per se here, though no matter how much I will stretch here, it was way too fast for me. It was not even “– let’s start dating,” no it is basically – “we belong with each other”. Maybe. I wish I could be convinced more than I was.

But I am not just talking about that, I am talking about the fact that nothing in the narrative convinced me that Dusty is capable of making good choices, of trusting people who are worthy of his trust. Of course I get that Joe is a good guy, but how the heck did Dusty figure it out so fast if his people barometer is so off?

I did like, though, that Dusty figured it out that he has other choices in his professional life rather than to move in with his parents, I appreciated that. I also thought that while Joe’s battle with addiction was a never- ending one, I did believe that he made some major changes with his life and was ready for a relationship if he wanted one. I liked their chemistry together; I just wish their move from point A to point B was not so fast. I know this happens in every other m/m book, and in some I can swallow it, but in this one it gave me a whiplash.
And of course we have the inevitable anal sex scene making an appearance again.

Moreover, I am perfectly okay in fiction with two people who just met having sex without condoms. I mean I personally feel it could be dangerous in real life, but people do impulsive things and I certainly do not need my m/m romances to be a sex education manual. However, in this book I get the impression that having sex without condoms is not used only to show that two men are so incredibly attracted to each other that they need to do it and they need to do it NOW and everything else be damned. No, I thought that it was used as extra – proof of their love, to emphasize how fast it sparked, and I just did not buy it.

“Joe pulled his fingers out. He picked up the condom. “You sure about this?”
“You wouldn’t lie to me.” Dusty took it from Joe and tossed it on the table. Joe held his gaze for a long moment. Was Dusty being foolish to trust Joe like this? Maybe. God knew he’d made bad mistakes before. But not this time. He was certain right down to his bones. Joe wouldn’t lie. And Dusty wanted to feel him, really feel him. Impatiently, he reached for the tube of slick and lathered Joe’s cock with lube”.

Once again, just how does Dusty know? Magic mirror?