The book starts out by placing the hero in a fairly bad light situation.  Mira Parrish is coming to live in Chicago and run a specialty shop called A Fine Romance, a store that will offer romantic items.  Mira’s had a number of unfortunate setbacks and the last three businesses she’d managed had gone out of business.  This time she is going to run a shop for her best friend, Ivy (from the previous story).

Sam Lyons, the man who owns the Lyons Bakery next door, was to pick her up at the airport but forgot in the midst of following his mother around the city.  Needless to say Mira has no soft feelings for him even if she thinks that his body is the nicest thing she’s seen in far too long. Getting stood up at the airport is the worst! I totally empathized with Mira until chapter two. 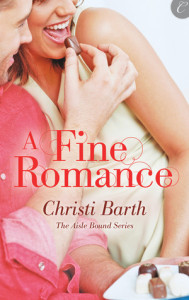 Then Mira began being kind of snotty snob and I had to keep reminding myself that Sam stood her up.  She refers to him as a “mama’s boy” and runs down his palate as pedestrian and describes him as “only a baker.” Ouch. But then Sam was unreliable to everyone but his mother.  So then I was back to empathizing with Mira.

This story focuses on three things – Mira getting the shop up and running, Sam dealing with his relationship with his mother and the romance between Sam and Mira.

Sam had made this strange deathbed promise to his father to watch over his mother and there was some discussion early on in the grief process his mother had a difficult time coping. So Sam drops everything to rush to his mother’s side even when she doesn’t want or need him.  Mira is second in his life and it’s easy to see why that would be a strain on whatever relationship Sam purports to want.

Mira had her own parental issues. They treated her quite cavalierly and reminded her constantly about her failures but she accepted their criticisms because she felt that they were accurate. Mira’s family wealth plays a small issue. I’m not sure if it was to provide more conflict between the lovers or to add flavor to Mira’s characterization.  Mira has a lot of personal wealth in the form of her inheritance but she won’t touch it which is admirable but if she really wanted to run her own small business, it seemed kind of ridiculous not use that.  (Also, given that her parents were too busy partying all over the world and her grandfather who started the business had died, you wondered how the corporation remained afloat.) Her poor little rich girl storyline was probably my least favorite but at least it wasn’t overly done.

I did enjoy the interplay between the characters and their friends. The six friends have formed a tight unit that is both supportive and loving.  Their friendship was the most emotionally accessible part of the book for me.

“Four of a kind always beats a full house. Period.”

“But it never comes around. I’m supposed to feel secure and joyful with a full house.”

“For the guys. The girls got leis,” Ben held up a hand, forestalling the inevitable, “and don’t make the obvious joke, because I spent three days straight doing it. I’m done with leis.”

Sam struggled to keep a straight face. “I hear that happens once you’re engaged.”

There was a poignant scene at the end between Mira and her best friend (and owner of the shop), Ivy.  Their business relationship was interfering with their friendship and they had to navigate through those waters.  The emotional connection between Ivy and Mira was stronger for me at times than the one between Mira and Sam.

The Sam and Mira conflicts felt a bit contrived. At one point in the book Mira complains about Sam’s loyalty to his mother and then complains that Sam believes in her and that she is afraid she’ll let him down. (At least the other character calls her on having a pity party).  Even their sexual attraction to each other seemed a bit forced. My own dissatisfaction really stemmed from not understanding the character’s motivations.  C