REVIEW: Love by the Numbers by Karin Kallmaker 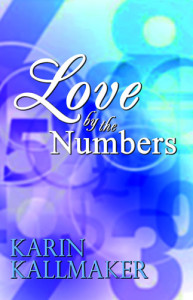 “As a behavioral scientist, Professor Nicole Hathaway’s work strips away the foolish mystique that surrounds the human mating dance. When her academic tome is treated as a viral “love manual” her ecstatic publisher books her to appear all over the U.S. and Europe. Worse yet, her quiet, managed life has been shattered by a series of incompetent assistants. And she’s certain this Lily Smith creature isn’t going to be any less a burden than the last assistant they sent her. Or the one before that. Or before that…

Lillian Linden-Smith needs this job. With a relentless TV lawyer and public mob still out for her blood for crimes committed by her “American royalty” parents, getting out of the country is her only hope for anonymity. If that means cleaning up and presenting an antisocial know-it-all Ph.D. for bookstores, clubs and lectures, fine. Dr. Hathaway may have succeeded in driving away all the others, but not this time.

From their first meeting the sparks fly, and each is thinking: She has no idea who she’s dealing with.”

After reading your novella “Comfort and Joy,” I wanted to see more of what you had published. The blurb for “Love by the Numbers” sounded interesting with a scientist and socialite finding love where they least expect it. I usually enjoy watching adversaries become lovers and these two were no exception.

Nicole and Lily are both constrained – Nicole by her Indian family expectations and her position at the University while Lily is being hounded by a Nancy Grace type character because of her parents Bernie Madhoff actions.

The plot set up is sound – Nicole is an introverted, reclusive person who needs an assistant on her worldwide book tour for her Oprah propelled smash hit that was never intended to be commercial – only scientific. Lily needs a way out of the limelight and from being holed up to escape tabloids and accusations. Plus she needs some source of money now that all her assets have been seized by the law. The two are forced into close contact as Nicole’s European book tour begins and it’s sink or swim together to get through the grueling schedule.

The romance takes its time developing as these annoyed acquaintances slowly become lovers. But there is some sex as both women take the opportunities presented by the tour to look for some quickies in the local lesbian scenes. Their wanting, however, is all over the place. Nicole is an analytical scientist, used to viewing the world “by numbers” and thinking of human responses as neurological chemical changes in the brain. it makes sense that she is more emotionally reserved given that and her background fending off her Indian uncles trying to marry her off and her mother trying to manage how far her education would be allowed to continue. Lily is used to emotionally fending for herself and not getting a whole lot of demonstrative love from her parents or relations. Both have used quick hook-ups as the way to sate their sexual needs without contemplating anything deeper.

I did wonder how realistic it would be that both of them would misread the other’s sexuality signals. I can believe that one of them wouldn’t broadcast any signals but both of them not doing so and both don’t catch onto the other’s sexual preference? There is one telling part where Nicole is explaining how we can circumvent our brains into changing “won’t” behavior into “can’t” which thus masks how we truly feel that could explain it. The moment of revelation is taken in stride at the bar in New Orleans leading to the night of passion that Lily’s Libido likes to replay with the volume on Dolby Stereo. Still I felt this aspect was rushed a little.

The discussion of how the scientific results of her book applies in a broader sense to women everywhere – and how Nicole can spice up her presentations to the average reader – actually highlight how Nicole and Lily – despite being from different backgrounds – can be compatible and find love together. Nicole and Lily do have telling insights into the other’s background and life make-up – Nicole explains how Lily’s self-centered parents never loved her and Lily cottons on to the fact that Nicole and her sister are remarkably same in spite of what Nicole has always thought.

The aspect of Nicole’s Indian heritage affecting her coming out was not explored as much as I would have liked. True she has been raised in the US but her mother and many relatives were raised in India and my understanding – though I could be wrong – is that GLBTQ sexuality is still more of an issue there. Nicole’s mother sure got on board quickly as did sister Kate but then maybe they’ve known about Nicole’s rainbow for a while and come to terms with it.

I laughed at Lily’s triplet mental advisors Libido, Common Sense, and Circumspect and how they whisper in her ear, encourage and edit her actions over the course of the book.

The ending and rush to marriage is quick but Lily and Nicole know that and the whole book has been about Nicole promoting her book that explains how a HEA is more likely due to DNA which can lead to higher probability of a long lasting relationship. That the proper mix of brain chemicals can lead to people falling in love for a lifetime and that this soup of the Love Drug can cause love madness and strange behaviors. Plus these two have gotten to know each other under very trying circumstances – endless, rushed travel, Lily’s encounter with Boone and Nicole’s sister’s pregnancy emergency so I’d say they’ve survived trials by fire.

It’s a quieter book without a lot of sexual fireworks but I like to see a couple fall in love outside of the bedroom as well as in it and it works for me. By the end of the story, Nicole and Lily have accepted themselves – in no small part due to the help and actions of the other – as much as they’ve accepted love in their lives and I can believe in their happy ever after. B