REVIEW: The Truth As He Knows It by AM Arthur 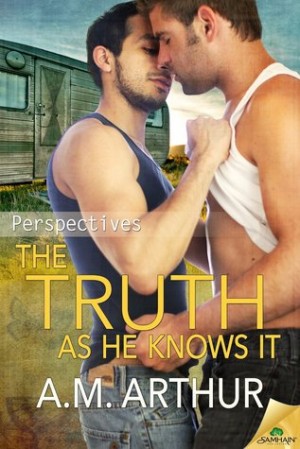 Noel Carlson is a 24 year old cop in the small town of Stratton, Pennsylvania.  He’s not out to his coworkers but knows that this isn’t going to be a permanent state of affairs.  He first meets Jody “Shane” McShane  (also in his early 20s) when he’s called to an apartment building where there has been a complaint of excessive noise from a party.  He finds Shane, the stripper hired to entertain the ladies, tied to the bed wearing only a g-string.

Shane doesn’t advise Noel or the other officer in attendance, but he was drugged by the party organiser and things were about to get pretty dicey for him until the police showed up.  He feels stupid and dirty but he doesn’t want to make a complaint. He wasn’t actually harmed (his thoughts), just scared and he wants to put the episode behind him and move on.

Shane has another job as a server/sandwich maker at Mineo’s, a local New York-style deli and he works as a stripper, mostly outside of Stratton, for extra cash.  He lives with his older brother, Jason, in a trailer and both of them work multiple jobs to try and pay off a large loan.

Jason and Shane had a difficult upbringing.

“My bio dad died from cancer when I was a baby. Mom married my stepdad Thom when I was two or three, I think. She died of heart failure when I was five.”

Jason is eight years older than Shane and didn’t get on well with their Stepdad, Thom.  When Jason was 18, Thom kicked Jason out and subsequentlyl started molesting Shane.

Thom jerks off while touching Shane intimately. It is not a one time event.

After Jason found out about the abuse, there was an altercation, the result of which was that Thom was dead, Jason went to jail for three years for manslaughter and Shane went to a group home.   Shane blames himself for what happened to Jason and, aged 15, when he is bullied at school for being gay, he tries to kill himself.  After his release from prison, Jason fought for custody of Shane and between the legal bills and the rehabilitation and therapy costs for Shane, they are heavily in debt.  Shane feels responsible in all the ways for the debt, even though Jason never complains.

Noel hasn’t had it easy entirely either.  When he was in college, he and his best friend, Tristan, were gay-bashed by a group of four thugs armed with a bottle.  Tristan sustained severe head injuries and has been left with short term memory problems.  He can’t remember very much after about 20 minutes and he lives in a care facility (with mostly elderly people) and carries a notebook to remind him of all the things he needs to remember.  Noel was cut on the chest with the bottle too and has some nasty scars but has no other physical disability as a result of the attack.  He is still traumatised by the event however and it played a large part in him deciding to become a policeman.  Noel visits Tristan in the nearby facility once or twice a week and has done for three years.

There is a lot going on in this book.  It has a high angst factor.  That being said, there were places I was half expecting the story to go and found myself pleasantly surprised when it didn’t.    There was an interesting moral dilemma presented for Noel when he finds out that Shane was drugged at the party where they’d first encountered each other.  Both sides of the argument are presented well and it was difficult for me to decide who was right.  I felt that both of them had compelling arguments.   This fight also has further implications for Shane and he resolves not to tell Noel about the porn until after his debt is paid off and he is finished with it.

One of the best things about the story for me was the relationship between Jason and Shane.  They were extremely close and willing to do anything for the other.  As much as Shane felt responsible for their situation, Jason never held it against him – either passively or actively.  Even though they had so much going on, their relationship came across as authentic to me.

I also liked Tristan, Noel’s friend, and I wouldn’t be surprised if he isn’t one of the heroes of the next book.  While I enjoyed reading about Tristan and the flavour and colour his character added to the story, some of his plot went nowhere.  I think it was set up for a future book but I was a little disappointed it took up so much page time in this book without a payoff.

When Noel’s coworkers became aware of Noel’s sexuality, there was some hazing but this plot point didn’t really go anywhere either.  I suppose it did serve the purpose of showing that not everybody in Stratton was open and accepting though.

I did think Noel and Shane had a whirlwind courtship and they faced loads of issues very early on – it wasn’t quite the kitchen sink approach to drama, but there wasn’t much they didn’t come up against.  It would have been understandable for either man to decide to leave well enough alone.

It took me a while to get into the story.  Partly it was because of my reading mood and partly it was because in many ways, this book felt familiar in that “two-traumatised-heroes-heal-each-other-with-true-love” way that can work for me sometimes but not if I feel I’m being manipulated.  I find there is a tipping point.  When one hero has a lot of problems, or both heroes have a few problems, I might be able to relax into the story.  Where everyone has all the problems I feel that sometimes it is an angst-shortcut: rather than building the emotional tension by characterisation, there is instead a reliance on traumatic events.  It’s not always the case, but it can be and I’m a little wary of it even as I’m attracted as a reader to the rescue trope (I’m contrary like that).

As I said above, there were things I was half expecting to happen and I was pleasantly surprised when they didn’t.  By about the midway point of the story I had become caught up in it and then something happened I wasn’t expecting and I was unexpectedly (and messily) emotional about it.  I was thinking that rather than the C+  the book was heading toward, I would be giving this book a B-.  But then ending happened so very quickly, I hadn’t quite recovered enough to completely buy the HEA.  For me the story went from black moment to happy happy joy joy just too darn quick and I had a kind of emotional whiplash.  And may I just say? There are some places a makeout session just feels wrong.

Those who enjoy books by Amy Lane or Mary Calmes will probably like this story better than say, fans of Tamara Allen or Alex Beecroft. (Although there is nothing stopping someone enjoying books by all of those authors of course.)  The Truth As He Knows It is high angst and fast romance – there’s no slow build and the stakes are high from the beginning.

The middle and most of the end had me paying attention and caring about the characters and then there was that messy section where I needed four tissues (Four!)  so I can’t say I was unmoved by the story.  The beginning didn’t wow me but it ended up being an entertaining read.  Given my concern about the fast turnaround at the end, I’m going to stick with a C+.