REVIEW: Dreams of Gods and Monsters by Laini Taylor

Readers please note: This review is for the final book in a trilogy and therefore contains spoilers for the first two books. If you are interested in reading this series and prefer not to be spoiled, check out Jia’s review of the first book, Daughter of Smoke and Bone.

I loved the first two books in your Daughter of Smoke and Bone series, so when Dreams of Gods and Monsters, the final book in the trilogy, came out I bought it right away. It took me longer to read it, though, because the previous book, Days of Blood and Starlight, was so very dark that I was afraid of what might happen in book three. 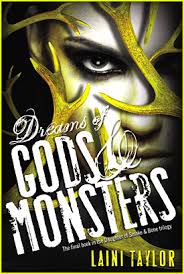 When we last met up with Karou, Akiva and their friends, Karou had killed Thiago in self-defense and resurrected Ziri in Thiago’s body. As Dreams of Gods and Monsters begins, Ziri, who hates being trapped in that role, must now lead the chimaera while oozing enough menace to pass for Thiago.

Akiva offers “Thiago” an alliance with the Misbegotten, the illegitimate angels who have rebelled against Jael’s empire. Ziri accepts the offer, but his chimaera lieutenants assume he intends to turn on the Misbegotten at the first opportunity, as the real Thiago would have done.

For his part, Akiva must also convince the Misbegotten to ally with the chimaera, and it isn’t easy. Akiva trusts the Misbegotten will follow his lead once they agree, but will the chimaera, who rightly hold the angels responsible for the genocide of their people, attack them when the two groups unite in the Kirin caves?

Karou is caught in the middle, loyal to the chimaera but unable to suppress her feelings for Akiva, whose soul still calls to hers. But can she forgive him for Brimstone’s death and that of so many others?

Seeing Karou with “Thiago,” Akiva feels cast aside and even betrayed, but his heart won’t give up on her—or on the détente that he hopes can still turn into a lasting peace. Together, can Akiva and Karou bring on the day when the souls of the dead chimaera will be resurrected? Can their hopes that such a time will come survive?

Meanwhile, the Stellians are hunting for Akiva, whom they do not know is the son of one of their own. When he used the magic known as sirithar, Akiva transgressed against them, and now Scarab, the Stellian queen, is determined to kill him in punishment.

Imprisoned among the Stellians, the contingent of Misbegotten whom Jael had sent to the islands look out the window and observe that the sky appears bruised, and the creatures known as stormhunters milling in it, something they’ve never done before.

Back on earth, readers are introduced to Eliza, a researcher with a mysterious past and nightmares of another world. As Eliza and her boss arrive in Morocco, where a momentous discovery has been made, Jael, with Razgut’s aid, requests weapons from earth’s leaders, with which to wage an angelic war against the “beasts.”

Before he left Eretz, Jael stationed his elite soldiers, the Dominion, behind to fight the Misbegotten and the chimaera. In the epic battle that is coming, who will survive?

I enjoyed and appreciated Dreams of Gods and Monsters, but not as much as the first two books in the series. In this book, multiple things go just exactly right for the characters, and at times the book feels rushed. The chimaera’s acceptance of Karou, and Karou’s forgiveness of Akiva happen very fast. Tricks and deceptions which could easily have gone awry don’t. Jael, who was so menacing in Days of Blood and Starlight is a lot less so here.

It’s not that I wanted the book to be dark: the revelation near the end of Daughter of Smoke and Bone was devastating, and Days of Blood and Starlight was so dark I was afraid to read Dreams of Gods and Monsters and put it off for a long time.

But precisely because the first two books portrayed such painful situations, and so much went wrong for Akiva, Karou and Ziri in those books, their victories here seemed too easily won. It would have been easier to believe in the characters’ triumphs if they’d come at a more signficant cost.

Also, some plot threads are glossed over or simply dropped. For example:

In book two, the chimaera believed Karou had revealed the secret of resurrection to Akiva, and this was a big part of why they held her responsible for their genocide at the angels’ hands. So I expected the truth—that it was really Chiro who was to blame– to come to light in this book, but that didn’t happen.

In addition, one of the chimaera tries to kill Liraz in revenge for a past misdeed, and the resolution of the conflict between them is glossed over. The same is true with the explanation for the “return” of Ziri – we’re never told how this is explained to the rest of the chimaera.

The novel alternates between Eretz and Earth as well as between viewpoints, and sometimes we are left to wonder what is happening in one universe while we spend time in the other. This makes the book riveting, but it can also be frustrating when the pacing of one of the storylines slows.

There are some wonderful things about Dreams of Gods and Monsters, too. Eliza and her storyline were appealing and interesting, respectively. The mystery in her background is compelling and the revelations about it surprising.

It was satisfying to see Mik win Zuzana by performing one of his three heroic tasks, and the way he did it made it a great moment. Ziri also proved himself heroic, even more than he had already, and he has a romantic subplot that’s as lovely as anything I’ve read in a long time.

And although it seemed more seamless when it was shrouded in mystery, the worldbuilding is still terrific here. Eretz as well as its people, the angels and especially the chimaera, continue to fascinate and delight. The worldbuilding is far more detailed and fresh in this series than in most YA fantasy.

What this series does with the reincarnation and soulmates tropes feels unusual, different from the vast majority of stories that use it. Karou’s evolution from a teenage girl with an odd, secretive family to the chimaera’s resurrectionist is completed here as she rediscovers her strength and her capacity for hope—something her people need desperately.

I find it harder to forgive Akiva than Karou does, but I still found myself sighing over just how romantic their reunion is made by the beautiful writing:

Spoiler (Quotes from the second half): Show

Back in the caves, when their eyes had at last met across the breadth of the great cavern—across all the soldiers between them, both sides, and the weight of their treacherous enmity, across the secrets they both carried, and the burdens—even at such a distance, their look had felt like touch.

Akiva’s hand was moving down the length of her hair, again and again, and she could feel the press of his lips to the top of her head, and what filled her wasn’t desire, but tenderness, and a profound gratitude that he lived, and she did, too. That he had found her, and that he had found her again. And… dear gods and stardust… yet again. Let that be the last time he ever needed to come looking for her.

I’ll make it easy for you, she thought, her face pressed to his heartbeat. I’ll be right here.

Dreams of Gods and Monsters wasn’t perfect, but the romantic parts of the novel were gorgeous, and there was much to like in it, so it gets a B-.

→ Janine
Previous article: REVIEW: The Truth As He Knows It by AM Arthur
Next Post: Thursday News: Nora Roberts in the NYT, BEA is still too white, EverAfter free books, and “Fifty Shades of Buscemi”