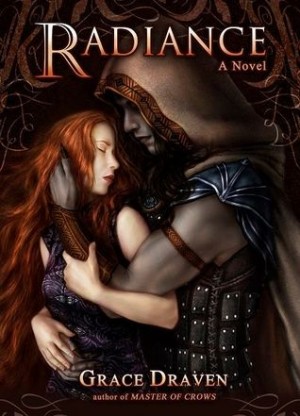 What a refreshing and different book! Again, I can’t recall who recommended this to me although I know that Has and Lou of the Bookpushers are huge fans of yours.

Radiance is the first in a series of books called The Wraith Kings and this story is about Brishen Khaskem, a prince of the Bast-Haradis kingdom of Kai, and Ildiko, a niece of the Gauri King.  To the Kai’s, the human Guari’s are quite distasteful.

“His upper lip curled in distaste at the sight of her skin. Pale with pink undertones, it reminded him of the flesh of bitter mollusk Kai dyers boiled to render amaranthine dye…Her eyes bothered him most. Unlike the Kai, hers were layers of opaque white, blue ringed in gray and black pinpoint centers that expanded or contracted with the light…the way that contrasting colors made it easy to see the eyes move in their sockets gave the impression they weren’t body parts but entities until themselves living as parasites inside their hosts’ skulls.”

To the Gauri the Kai are just as hideous with claw tipped fingers, gray skin and mouth full of razor sharp fangs. They have strange habits such as an aversion to the sun. But Brishen and Ildiko are to marry and cement an alliance between the Gauri and the Kai. Both are rather expendable. Ildiko is the orphaned niece of the current ruler. She was no Cinderella who was mistreated but pragmatically she understands that this marriage is the price of her being housed, fed, and clothed during her childhood.  Likewise, Brishen is a younger son with many heirs between him and the throne. He lives on a hostile border where his people make a purple dye coveted by outsiders and the threat of intruders from Belawat, a Beladine stronghold.

The Beladines and Guaris are at odds with each other and the alliance between the Gauri and Kai places the Beladines at disadvantage. While Ildiko and Brishen are eager to make their lives work together despite their many differences, those around them aren’t so keen on the pairing.

Both characters are pretty perfect in their open mindedness. In some ways, they were the same character. They were both very tolerant. They both had a good sense of humor. They were both kind. They did not allow their past prejudices to affect future relationships. There was a sort of mirroring in the progression of the story.

In the first half we see Brishen struggling with the food and customs of the humans and later we see Ildiko wrestling with the same things during the wedding celebration with Brishen’s family.

One thing I thought was interesting was that later in the book there is some indication that there have been Kai and human pairings in the past yet we don’t see them. It would have been in character for Brishen to seek them out for advice on how to go forward with his new human wife.

There was much made of the fact that the physical mating between the two would be  near impossible but in all the important parts, the two fit without many problems. It’s not a closed door romance but neither is the sexual part of the story the focus. This is truly a fantasy romance with an entire political drama playing in the background and providing plenty of excitement for future stories.