When I saw the title of your new book, The Gentleman Jewel Thief, I was immediately intrigued. I have a love of caper stories and I immediately thought of the caper romances I enjoyed in my youth, including Nora Roberts’ Hot Ice, Honest Illusions and Sweet Revenge, Connie Brockway’s All Through the Night, and Anne Stuart’s Prince of Swords. 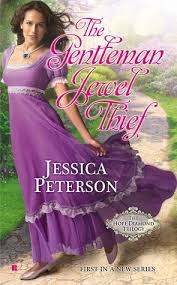 The Stuart is the only historical romance I could think of where the hero is a jewel thief, so when I spotted the title of your book, I imagined an Anne Stuart style hero, someone clever, sly, shady and sexy.

I should have remembered that few can pull off this type of hero for me as well as Anne Stuart, and even she doesn’t always succeed. William Townsend, the Earl of Harclay, may have been meant to come across as clever, sly, shady and sexy, but the execution fell short of my expectations.

The Gentleman Jewel Thief begins with Harclay, the gentleman to which the title refers, meeting with Mr. Thomas Hope, the owner of the investment bank that has doubled Harclay’s fortune. In the course of their conversation, Mr. Hope mentions that he has acquired a diamond once worn by King Louis XVI called the French Blue. Hope plans to show off the diamond at a ball he is throwing soon.

The action then switches to the arrival of Lady Violet Rutledge at Mr. Hope’s house for the ball in the company of her aunt and her cousin Sophia; the latter is attracted to Mr. Hope despite his being a commoner.

Violet’s excitement at the thought of dancing and flirting the night away multiplies when Hope asks her to wear the French Blue around her neck. Though Violet’s father is a duke, her family’s debts are considerable and their jewels have been sold off to cover those debts. Breathlessly, Violet agrees to wear the diamond.

Harclay arrives at the same ball and from his thoughts, it is apparent that he intends both to steal the French Blue and to eventually return it–mainly because he has been bored, and diamond-stealing makes his life more exciting. Although Harclay has seen Violet before, with the diamond around her neck she seems irresistible. Harclay, who hasn’t experienced a sexual spark in quite some time, feels a bonfire’s worth now.

He must focus on the theft, though, and therefore he flirts with Violet and plies her with alcohol, knowing Hope’s brandy is served disguised as claret, but beyond a scandalous waltz, he makes no further sexual advances. Instead, when bandits descend on the guests from the windows and darken the room by cutting the chandeliers loose, he steals the diamond.

On discovering that the French Blue is missing, Violet at first thinks the bandits took it, little realizing they are merely acrobats hired by Harclay. Mr. Hope asks Harclay to see that Violet is safe, and Harclay takes her to his own house and insists she spend the night there, despite Violet’s protestations that she must catch the thief.

Violet’s family fortune is invested with Mr. Hope, and if word of the theft reaches the papers, Hope’s enterprise could go down in flames, and Violet’s father’s estate with it. Violet must find out who stole the diamond and bring the thief to justice. Harclay, though, has other plans…

The first 130 or so pages of The Gentleman Jewel Thief were a frustrating experience for me, so much so that I quit around that point (40% of the way through, according to my kindle). On the one hand the book had lovely writing in places, like this bit:

Somewhere in the trees above, birds twittered and flitted about; the edge of the Serpentine lapped quietly at their feet. The springtime afternoon marched onward as if today were but one of a string of simple, idle days, each the same as the last.

But for Harclay and Lady Violet, today was not quite so simple, nor so idle. It was suddenly complicated, mined with explosive truths and well-played deceptions and a most thrilling episode of a physical encounter. It was impossible; it was improbable.

And great God above, it thrilled Harclay to no end. He hadn’t felt such excitement since he was a boy, allowed to accompany his father on the hunt for the first time. He would never forget the way the rifle had felt in his hands, the pounding of his heart as he took aim.

Much of the writing quoted above is quite good in my opinion, so when I came across this excerpt at the beginning of the book, I thought I was in great hands.

As it turned out, though, the truths weren’t as explosive and the deceptions not as well-played as I hoped. Although the physical encounter was very hot, I wouldn’t go as far as “most thrilling.”

There was some less-than-careful writing in the book too, such as this:

Violet’s blood jumped at the growl in his voice. She didn’t dare meet his eyes; rather, she glanced about the table and was pleased to note her fellow diners were far too involved in their own games of seduction to pay much heed to her own. Except Auntie George, of course, whose high, feathered headdress trembled with rage.

Never mind whether blood can jump, I don’t think a headdress is capable of rage.
Or this:

Lips can reveal teeth, but I don’t think teeth can reveal lips. I understand that the intent is to say Harclay’s smile revealed the part of his lips stained purple from wine, but the word and phrasing choices stopped me in my tracks as I read this sentence.

In other places a profusion of adjectives is used in one sentence. For example, hero is described as looking “rather like an unkempt, intrepid pirate, sun kissed and hardened, unafraid to pursue that which he desired.”

In the introduction to this review, I said I was drawn to this book because I’ve enjoyed caper stories in the past. But part of what I love about them is their “how to” aspect. If a police procedural is a novel in which we follow a police officer step-by-step through piecing together how a crime took place and who committed it, then a caper is a story in which we follow a thief step-by-step through the execution of a great theft.

By that definition, The Gentleman Jewel Thief is not a caper. The theft is not very complicated, nor is there much suspense about whether it will be carried off or what might go wrong. There aren’t many steps to involved; it seems too easy.

I suspect there may be a reason for that given in the latter part of the book, but whether or not there is makes little difference to me, because I hoped to read a romance surrounding the planning and execution of a theft, and instead I feel I mostly got an exercise in mental lusting between an oversexed hero and a flaky heroine.

How oversexed is the hero?

“The earl of Harclay…they say he deflowered an entire village in Sicily. Yes, the nuns, too!”

2) Here’s the first thing Violet says to Harclay in the book (after he has commented on her wood nymph constume):

Grinning ever so slightly, she flitted her gaze to his breeches and raised a single eyebrow. “I daresay you’re the expert in wood, Lord Harclay.”

3) Another bit of repartee between them is this:

“But how many eligible daughters are left, really, that you haven’t already despoiled?”

How flaky is the heroine?

Hardly knowing Harclay but well acquainted with his reputation, she wagers her virginity on a card game with him. She has no intention of sleeping with Harclay. Instead she means to cheat at the game, but she gives literally no thought to what might happen if Harclay catches her cheating at cards. And this despite the fact that Harclay is widely known to be an expert gambler.

Following a dinner party at Harclay’s house, as their carriage is about to take them home, Violet also decides that “With her chaperone knocked out cold, she had the rare opportunity to search the earl’s house without Auntie’s well-intentioned, but extremely irritating, interference.”

This decision is driven partly by attraction to Harclay and partly by her need to recover the diamond, but Violet’s social position as a duke’s unmarried daughter seems to play no role whatsoever in her decision making. And again, getting caught doesn’t figure in her thoughts.

As I was reading this novel, I thought of some of the recent online discussions (like this one and this one) of how ineffective unsubtle sex can be.

Foremost in my mind when I think about The Gentleman Jewel Thief is the realization that so much lust pours off its pages that it drowns out every other emotion I, or the characters might feel. There is therefore little attention given, at least in the section I read, to bringing the romance. And while sexual attraction between the characters might spark an interest that will get me to start reading a book, by itself, it can’t get me to finish it. DNF.

→ Janine
Previous article: REVIEW: Breathless for Him by Sofia Tate
Next Post: Friday News: Google’s ‘right to be forgotten,’ Amazon v. the FTC, the death of the novel (again, still), and the NSFW asymmetric man thong